Silliness on a bike 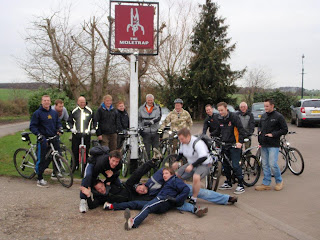 Who would ever have thought that a group of lads on bikes heading into the countryside could be so much fun?

Twice every year a group of men with ages from 18 to late 60s all meet at a house have a tot of whiskey and then spend the rest of the day cycling from pub to pub.

Sounds innocent enough doesn't it. But you would be surprised.

This small scale bike ride organised by the old boys from Ongar Rugby Club can become the most drunken and ridiculous ride ever.

We all gather and muster at a house in High Ongar where we are fortified by a whiskey and a sausage sandwich.

Once we are sure that all comers have arrived we set off.

Normally we do a good ten miles of serious cycling before we 'arrive' muddied at a pub. Massive rounds follow and everything goes downhill from there.

One year we became lost in the woods and eventually stumbled out onto the road near a pub called the Viper. Luckily enough we popped in for liquid refreshment and some drinking games.

Several hours later I wobbly mounted my bike and then crashed as someone had loosened the handlebars.

Pranks like this are common. One year a youngster from rugby wanted to throw our Captains’ bike in the river. He asked which one it was. We pointed out a random bike in the group and in the water it went.

Later on and several pints and shots later we all collected our bikes. Including our Captain who sat on his.
The youngster looked perplexed as to where his bike was and then realised that in his haste he had thrown his own bike in the river.

Watching him wade in while we splashed him with the cold stagnant water was a treat.
We have lost people en route. One man who was 40 had to phone his Dad to come and find him after he tried and failed to take a short cut through the woods.

This may all sound rather silly, stupid and idiotic. It is, but there are some rules.

Everyone must have a helmet and everyone has to have a reflective jacket or vest a working lights. Also all bikes are checked over for their suitability as once we had to abandon one at a country pub and give a backie to one of our drunken players who had snapped the frame.

Over the years the bike ride has grown in size and become bigger, better and more ambitious.

We used to ride to a cup called the Cuckoo and spend a long time there before departing and heading back towards town. Since that pub closed we have ventured out into areas 20 or 30 miles from home. 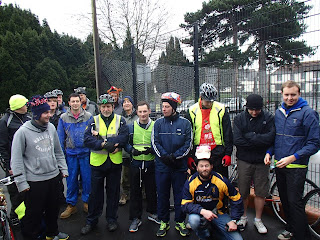 It is a great way to see the countryside and an even better way to discover pubs.

The old boys who run it treat it like a military manoeuvre. They cycle out the day before and check the route and check to see what pubs can offer lunch. Therefore it has the intentions of being a mature country cycle. I think it is just us, the players who descend into drunken bike madness and drag the entire group with us. 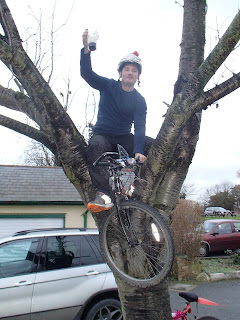 One year we played a drinking game where we had to repeat after the drinking master and then double, triple and quadruple each work and action. I am terrible at this and once out of the pub I came off my bike and somehow ripped my trousers completely. In the next pub I was gaffa taped together to avoid my modesty!

One year it was very cold and we were at a pub in Toot Hill. The next pub the Mole trap was about 2 miles away and we were told to behave as it was one of the riders locals.

Therefore we let them set off and followed at a discreet pace.

A discreet pace in nothing but our pants.

Every year they get longer and sillier.

Long may they reign!


Posted by Unknown at 15:00
Email ThisBlogThis!Share to TwitterShare to FacebookShare to Pinterest