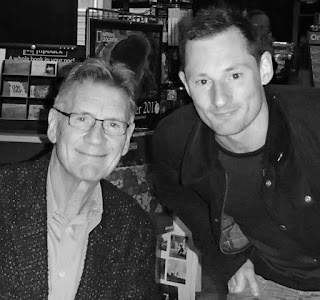 There are many people I admire from a far and many who have had influence over my life.

I have travelled to places because I once read about them in novels or participated in festivals because Hemingway's descriptions brought them to live for me and I had to go there.

There is one person who has influenced me a great deal, thought me to travel and see as much as I can but at the same time immerse myself and be kind, friendly and happy while I do so.

This person has been around my entire adult life and his programmes have always been on TV and repeated. His travel documentaries have travelled the world and see places far flung and inaccessible as the South Pole.

All the time he has been serious yet silly, informative and fun and always himself. I am talking none other than the legend that is Michael Palin.

One of the best Christmas presents I ever received was the Palin travels box set.

All his travel documentaries from 1988s Around the World in 80 days up until 2007s New Europe.
Every single one I have watched and lapped up. Many places I have visited myself and it has become the norm to watch a Plain episode where he visits a place I am due to travel to.

One day I discovered that the man himself would be in London at the brilliant Stanfords map and travel book shop. This was an opportunity too good to miss. I wanted to meet the person I grew up watching on TV and the man who taught me so much about the world.

Many people can probably say this but it is true. From a far Michael Palin CBE has taught me so much. His programmes are easily re-watchable and fun. You can have them on I n the background while you work away.

It was a cold day in London. The wind was biting as I stepped off the train at Tottencourt Road and walked down to Covent Garden.

In my mind I had many things I wanted to say to the great man. I wanted to be polite, informal and come across as someone is not a nutter.

It is not every day you get to meet someone who was in the greatest comedy film of all time, namely Life of Brian.

Basically I was going to a book signing. I had never been to one before as I thought they were a little odd, especially as people queue for hours. Luckily I got there in time purchased his new book on Brazil and also in my pocket had a copy of my personal favourite travel documentary accompanying book Palin’s Hemingway Adventure.

Then I saw him, looking greyer and more wrinkly but still with that brilliant cheeky smile. Michael Plain wandered in shook a few hands and started to sign stuff.

People brought in books, posters and all sorts of Python memorabilia.

There were people dressed as the Gumby man and it became apparent that there were some serious autograph junkies in the queue.

I was here just because I thought it would be a once in a lifetime opportunity and I even brought with me my camera.

Then it was my turn and low and behold we had a little chat. I asked him if he wouldn’t mind signing my dog-eared battered Hemingway’s Adventure and he was as pleased as punch that I had read it.

I wanted to say so much but instead I just warbled on about how Hemingway inspired me to go to Pamplona and participate in the Bull Run.

With that he raised his eyebrows and said you must be a little mad, I agreed and he reiterated that he was glad I enjoyed it.

Then it was time to move on.

A quick photograph later where he pulled a grin/gurn I was on my way.

Only a matter of a minute but I had met a travel hero of mine.

There is only one other man I would queue up to meet and that would be Sir David Attenborough.
I walked back out into the cold and looked into my newly scribbled in book.

The message saying Ben all the best, Michael Plain put a huge smile on my face as I walked into London and towards the nearest tube.


Posted by Unknown at 13:00
Email ThisBlogThis!Share to TwitterShare to FacebookShare to Pinterest