As close to the pole as I may ever get 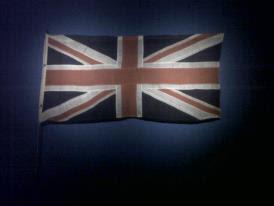 Britain has created a vast ream of heroes over the years. In days gone by a hero was an explorer, a soldier or sportsman.


Where have all the heroes gone?


The heroes that I admire are all explorers. We now however live in an era where exploration has almost all been done and dusted. Every inch of the planet has been discovered, almost.


The days of the explorer are numbered. We still have people such as the great Sir Ranulph Fiennes who I had the pleasure to attend a talk of his in Cambridge. But he is now an adventurer rather than an explorer.


The age of the great explorers has past.


They are a thing of the past that has become legend.


One however will always in my eyes be the greatest of British explorers and possibly the greatest of all time.
This man perished over a hundred years ago in the cold of Antarctica and as the ice slowly moves this Naval man will one day get a sea burial.


I am of course talking about Captain Robert Falcon Scott. Scott of the Antarctic.


History remembers him for being the second man to reach the South Pole in the great race with Norwegian explorer Roald Amundsen.


In truth it was never a race and Scott was there not only to get to the pole but to undertake one of the biggest scientific expeditions ever undertaken.
In the past I have hoovered up Scott literature, reading about the man who became a legend and his two Antarctic expeditions. The last of which resulted in his tragic death along with Lawrence Oates, Edward Wilson, Henry Bowers and Edgar Evans.


There are hundreds of books about Scott and especially the Terra Nova expedition where he met his untimely death on the Ross Ice Shelf.


Many of which portray him as heroic while others are less flattering and make harder reading.

The Queen's Gallery in Buckingham Palace hosted an exhibition called The Heart of the Great Alone.


In which it showed wonderful Antarctic photography from Scott, Shackleton and Amundsen expeditions to Antarctica.


I went along one summer’s day to see the exhibition for myself and eagerly walked through Green Park with the trees rustling.


I entered with my audio guide and spent a good hour or so looking at the fantastic photography taken of the coldest place on Earth.


I walked around staring at pictures of ships stuck fast in the crushing ice, mesmerised at the human endurance on show here and the hardships that each member of the expeditions would have endured.


Men of such courage and strength that the world will never again see they truly must have gone through a living icy hell all in the name of science and the furthering of human exploration.


As I walked through the gallery and neared the exit there was the most brilliant display I could ever see.


For me this eclipsed the Scott statue I saw in Christchurch, New Zealand of the great man.
For in front of me was something closer to Scott than any statue could ever be. This one item is the closest anyone can ever get to Robert Falcon Scott, my hero. 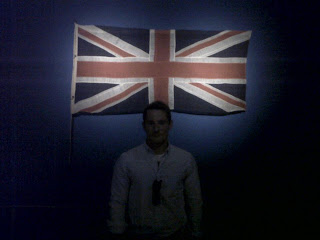 On the wall was the actual Union Flag that flew at the South Pole when Scott and his man hauling team arrived there on 17th January 1912. Sadly they discovered that Amundsen and his team had beaten them by five weeks.


The flag that flew at the pole and was later returned to England after the search party finally found the bodies of Scott and his men minus Captain Oates (I am going outside and may be some time) on 12th November 1912.


Scott is presumed to have died on the 29th March of that year and his last diary entry dated the same day reads "For God's sake look after our people".


To stand in front of that flag made me feel proud to be British, it made me feel honoured to stand there looking at something that has been to a place I probably never will.


It is more than a flag; it is an embodiment of human endurance in the face of adversity and a testament to lives given in the most inhospitable place on Earth.


I felt honoured to have seen it and it made a profound affect one me as I stood gazing at it for what seemed an eternity.


It was dimly lit and that added a certain poignancy to it. The flag that flew at the Pole in 1912 and was brought back by Scott and his men and then recovered from their tent which became their final resting place.


This is the closest anyone can ever get to a truly great British hero, a man who inspired millions and continues to do so.


What they all must have gone through was certainly unimaginable unless you have been there and that sadly for the considerable future does not look likely for me.


No wonder they called it the heroic age of Antarctic exploration.


For each and every one of them are true heroes in the true sense of the word.


“To strive, to seek, to find, and not to yield”, was scribed on a cross erected in Antarctica and those words from Tennyson’s Ulysses are incredibly true.


All Britons should know Scott’s story and be immensely proud of a truly great man.

Posted by Unknown at 02:30
Email ThisBlogThis!Share to TwitterShare to FacebookShare to Pinterest