I am not supposed to write about work. But I cannot help myself with this one heartwarming story.

Besides this story is one that involves a little guy who has grown up to be a big boy. 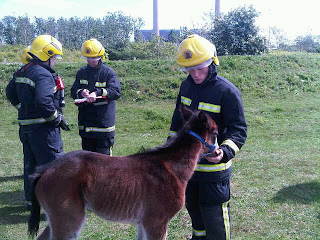 For this little story I will try and leave out as many work details as possible and concentrate on the heart warming tale at the epicenter.

One day in late 2010 or early 2011 (I am getting old and can't remember) we received a call at the fire station saying that a horse was stuck in a ditch down in Tilbury.

We got there and a mare had given birth during the night. While she had given birth the hooves of the foal when coming out had unfortunately cut and ripped the mare open. As she gave birth she also prolapsed and had an incredible amount of insides on the outside.

Sadly she had to be put down by the vet. Who was called out after our attempts to get her out of the ditch which she had rolled into in agony failed.

On the opposite bank the whole while sat a little foal. Barely a day old and when he got up was jittery on his legs.

This adorable little fella needed to be caught for his own safety. So off I went and managed to catch him and calm him down. The rest of the afternoon was spent with this lovely little foal suckling on my fingers and dozing on my lap.

I grew quite attached to him and as he looked up into my eyes I knew I would see this little scamp again.

Luckily I got the good end of the stick and looked after this little wonder horse who had survived the night with his mother in the ditch. The others; well they had to deal with his now deceased mother.

I got chatting to the vet and she asked me what my name was. I replied and she suggested the foal be called Ben junior. It was a real honour and the name stuck.

Ben junior was an orphan now; where would he go and what would become of him?

Fantastically Ben junior was taken to a sanctuary called Red Wings based in Hapton, Norfolk. This for me was brilliant news as coincidentally Hapton is where my cousins live.

Time passed and Ben junior grew. Red Wings every so often sent me an email or two on his progress. At first they thought he would die as he wasn't eating. Then they put him in permanently with another horse who had sadly lost an eye and he started to get better and eat.

Before long he was massive and running around the paddock in Norfolk.

I promised to visit and that day came when I went up to see one of my cousin's new baby.

Popping into Red Wings I was taken over to see him. The scrawny little foal I once picked up in my arms was no more. There was a young horse trotting around the paddock with his one eyed friend. His friend whose name escapes me licked the inside of his  empty skin covered eye socket scratched!

I wondered if Ben as he was know known would remember me; that question was answered when he trotted straight over to me and I didn't even have any food.

It was lovely to see him again and it is not every day you get a horse named after you.

Next time when he is bigger they want me to try and ride him! 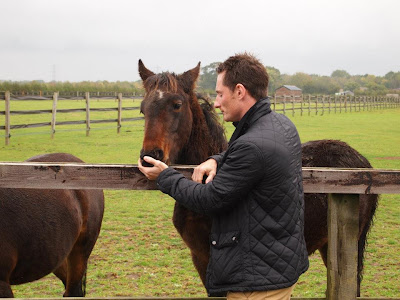 Posted by Unknown at 16:19
Email ThisBlogThis!Share to TwitterShare to FacebookShare to Pinterest