Any one for some Chiddingstone? The bank holiday arrived and with that plans to visit somewhere different. Somewhere that I had never been to before.

I wanted to see a place renowned for antiquities and a collection of items from all over the world.

Recently I had become aware of a place called Chiddingstone Castle in Kent, not far from Tunbridge Wells; or Royal Tunbridge Wells as I should call it.

This ‘castle’ is really not a castle at all but a large stately home that has been added to over the centuries from its inception in the early 16th century.

I had heard stories about a vast collection of antiquities collected by a rather bizarre man over the years.
Because the architectural design and style was not any of that to rival many other stately homes the fact that the ‘castle’ housed a ‘great collection’ was the factor that drew it to me.

Two of us set off down the M25 on a biting cold April Bank Holiday Monday. The wind battered the car and you could feel it trying to swerve on the motorway as we crossed the Queen Elizabeth II Bridge and left glorious Essex and entered the Garden of England, otherwise known as Kent.

Leaving the motorway and the A roads behind we entered a beautiful picture postcard area of rural Kent. Thatched roofs shot by the windows and driving was down to twenty miles an hour as we passed old hop farms with oast houses littered the lanes and the fields.

The roads narrowed and we were now truly in an area that could claim the Garden of England as its name.
We pulled into the gravel driveway to Chiddingstone Castle and the tyres on the stones made that familiar and lovely crunching sound as we drove down to the car park.

In front of us stood the castle; disabled parking in the front and a large welcoming door. Large gardens surrounded the house and a man-made lake which at the time of digging was all the rage with those who lived in manor houses.

We entered and the large door swung open with a creek; stepping out of the cold into the hallway we were greeted by a grey haired women and an entry price of £8 each. A price that I now feel was very steep for what was actually housed there.

A couple followed us in and the grey haired lady started to recite a potted history about the house and then pointed our attention to a large canvas with a picture of the collector of antiquities himself a Mr Denys Bower. More on him later.

Her accent was muddled, almost upper-class but with hint of South African in it. Almost as if she had been here in rural Kent for a long time.

While she went on about the collections housed in different rooms I tried and failed to suppress a fart. It popped out making a creaking noise where immediately I looked at the ground shuffled my feet and made out as if it was a creaking floorboard. The person who I was with tried and failed to stifle a giggle but apart from that I think I may have got away with it.
Anyway after that we shot into the first room that housed the ‘Japanese collection’. I use the term collection loosely as inside was a central case containing Samurai swords and surrounding it a few cases with old samurai armour and face masks in it. 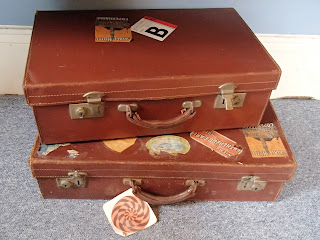 Next was the Egyptian room where I was greeted with a large empty cabinet saying that everything was on loan in America . What was left didn’t really impress, especially if you had been to Egypt.

Moving on to the Buddhist room I was pleased to see a framed and signed picture of the Dalai Lama and many golden Buddha statues situated in cases around the room.

We walked up the creaking stairs and discovered that half the house was shut off. There were old bathrooms and bedrooms and a brilliantly antiquated study with a fantastic old set of suitcases on the floor.

This room was dedicated to the late owner Denys Bower who became infamous for ‘accidently’ shooting his lover and then turning the gun on himself. Being a terrible shot he woke in hospital and was charged with attempted murder. His lover survived and he ended up in jail.

He bought the ‘castle’ with a loan from the bank and wanted to open it to the public for a fee as a way of paying back the loan; this and also a place to keep his collections.

Bower died in 1977 and in the gift shop they are flogging his biography along with jams, lamps and other random objects.

We left the castle having seen something new, explored a new place but apart from learning about Denys Bower and his lust for a women 30 years younger that led to his incarceration I had not learnt much.

What I had learnt though; was that even if sometimes places you visit are mundane, if you are silly the day can still be fun!

Especially if you visit the ‘activity room’ and take part in dressing up like a mummy! I will never grow up. 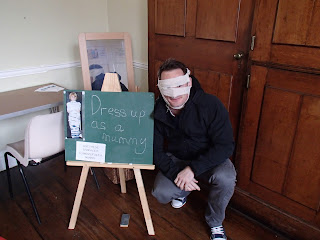 Posted by Unknown at 08:00
Email ThisBlogThis!Share to TwitterShare to FacebookShare to Pinterest