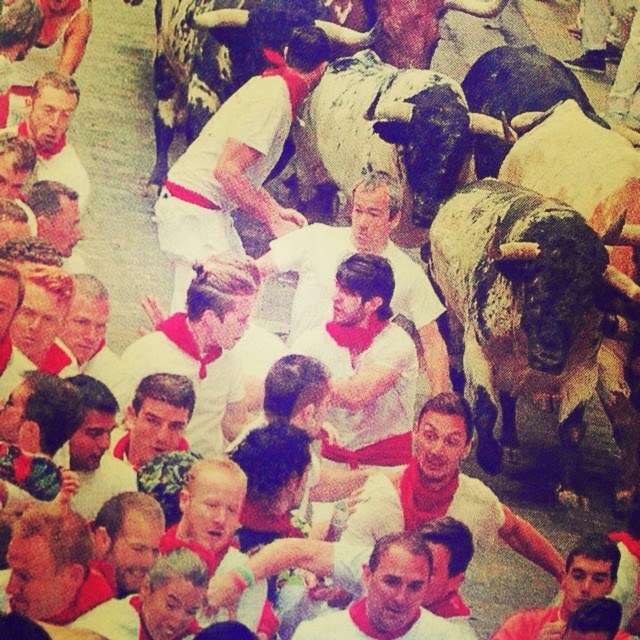 7th and 8th July. Another early start for an adrenaline fueled canter down the street being chased and running with the bulls. 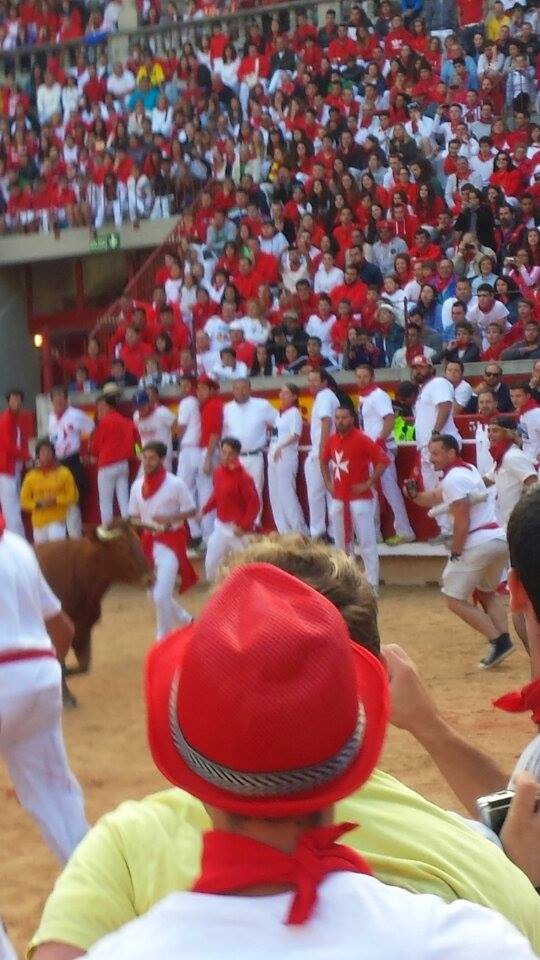 It only feels like yesterday when it was 2013 and we did this before. My 4th festival of San Fermin didn't disappoint.


Another trip to Pamplona the wonderful Spanish city and another two runs where you literally dice with death.
After six days of sangria abuse my voice is shot to pieces, my feet ruined and my mind broken.
Pamplona and San Fermin have chewed me up and spat me back out into the world.
Was it worth it?
Hell yeah!

San Fermin; if you utter those two words a shiver travels down my spine and the hairs on the back of my neck stand to attention.


Those two words for me summon up a melting pot of emotions. Fun, excitement, thrills, scares, adrenaline fuelled madness and pure exhilaration.
For this year was my fourth year running with the Bulls in the beautiful Spanish city of Pamplona.
Every years since 2011 I have run and said that I may not come back the following year. Then when July arrives I can’t help myself and I am off to Spain to run with those giant snorting and bulking beats. Horns inches from my face and certain injury.
This year was slightly different. I travelled with one person rather than a group of us. This year I took my 19 year old cousin Ollie who to be blunt is not very well travelled and worldy. This trip would either break him or make a man of him.
We arrived after a long horrible and sweaty bus journey and I was greeted with the familiar sight. The city of Pamplona looked pristine in the sun, the buildings clean and the streets vendors selling red and white garments for you to wear. I old Ollie to take a photo and then compare his pistine city to when the opening ceremony hit town.
The opening ceremony o the 6th July literally explodes into life.
Imagine someone has swung a bat at a large piñata suspended over the city and suddenly as the bat strikes sangria explodes and soaks all and sundry.
The city becomes red and pink for a week after this.
So here we were as usual we had picked up a large group of Australians from the campsite and it wasn’t even nine in the morning and we were in the town square covered from head to toe in sangria.
We were all in white which was now pink with red sashes round our waits and a red neckerchief around our wrists ready to wave it a the strike of midday.
One of the Aussies Luke turned to me and smiled and said ‘I cannot believe the carnage and it’s not even lunch time yet’.
People were bundling, plastic bottles were flying and soon filling up balconies making it impossible for the occupiers o open their doors.
Shirts were ripped off and sangria flew through te air getting into your eyes and making them sting.
People danced, sang and music blared. Flags fluttered in the breeze and all this was in anticipation of the start of the San Fermin festival.
Legend has it that San Fermin was dragged through  a town in France by a rope attached to his neck b bulls. This is why when the clock strikes 12 and the cannon sounds the neckerchiefs can be worn to symbolise his blood.
Every face around you smiles and shouts and has a wild look in their eyes.
It is almost as if anything goes and people are jumping into the crowd and literally going berserk.
A smile so wide you could park a car in it is permanently embossed on my face and this is why I come back. For this one day where almost anything can happen and you wander around a city drinking, singing, getting randomly interviewed on TV and talking to everyone.
The cannon sounds and the cheer from the crowd is immense, the jostling and dancing erupts and for the next hour and a bi you are in a sea of red and white and pink sangria soaked sweaty bodies moving as one unit. You are lost the a moment that lasts forever and you are almost overwhelmed by what in my opinion is the greatest festival on this wonderful Earth. 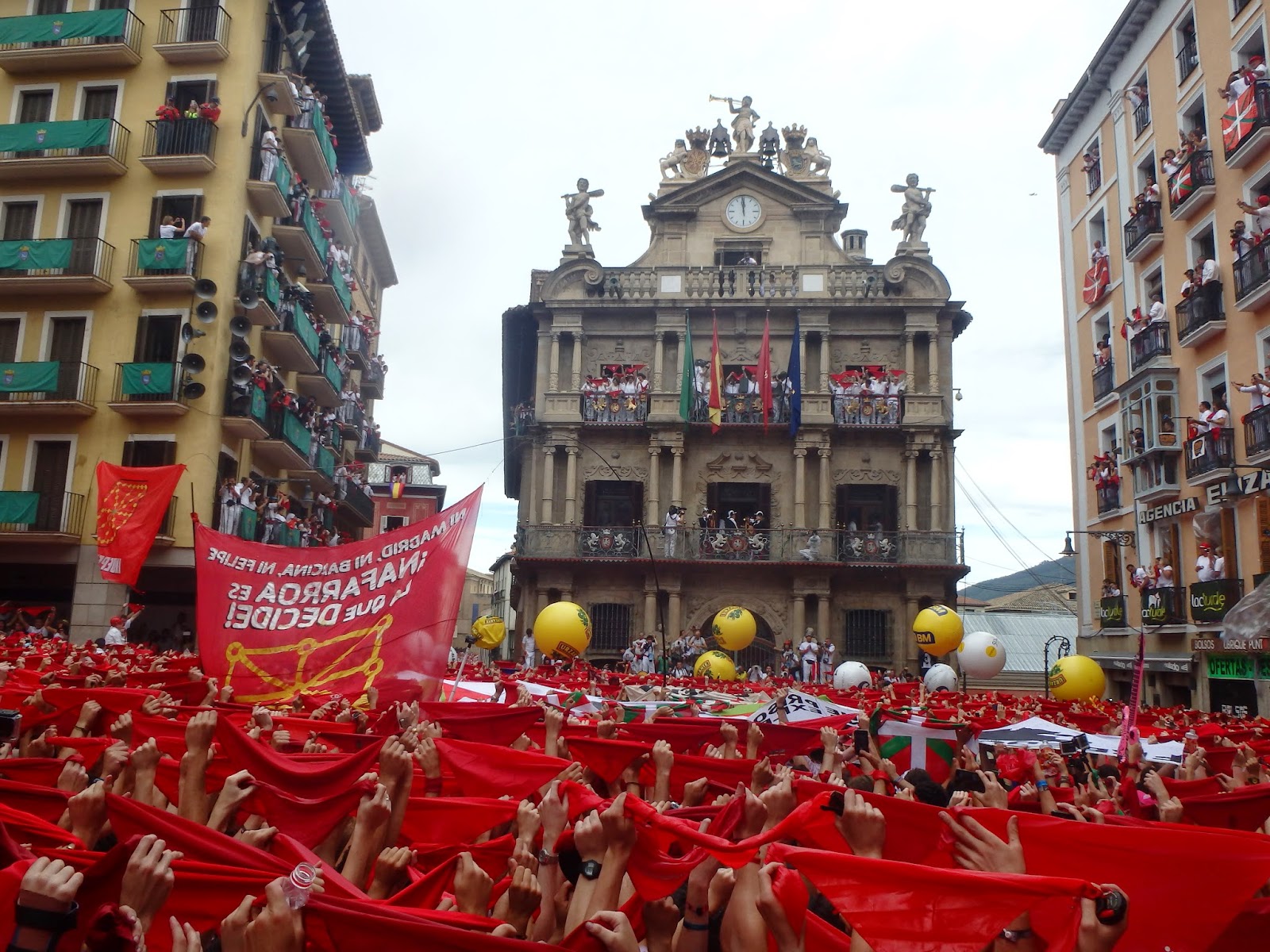 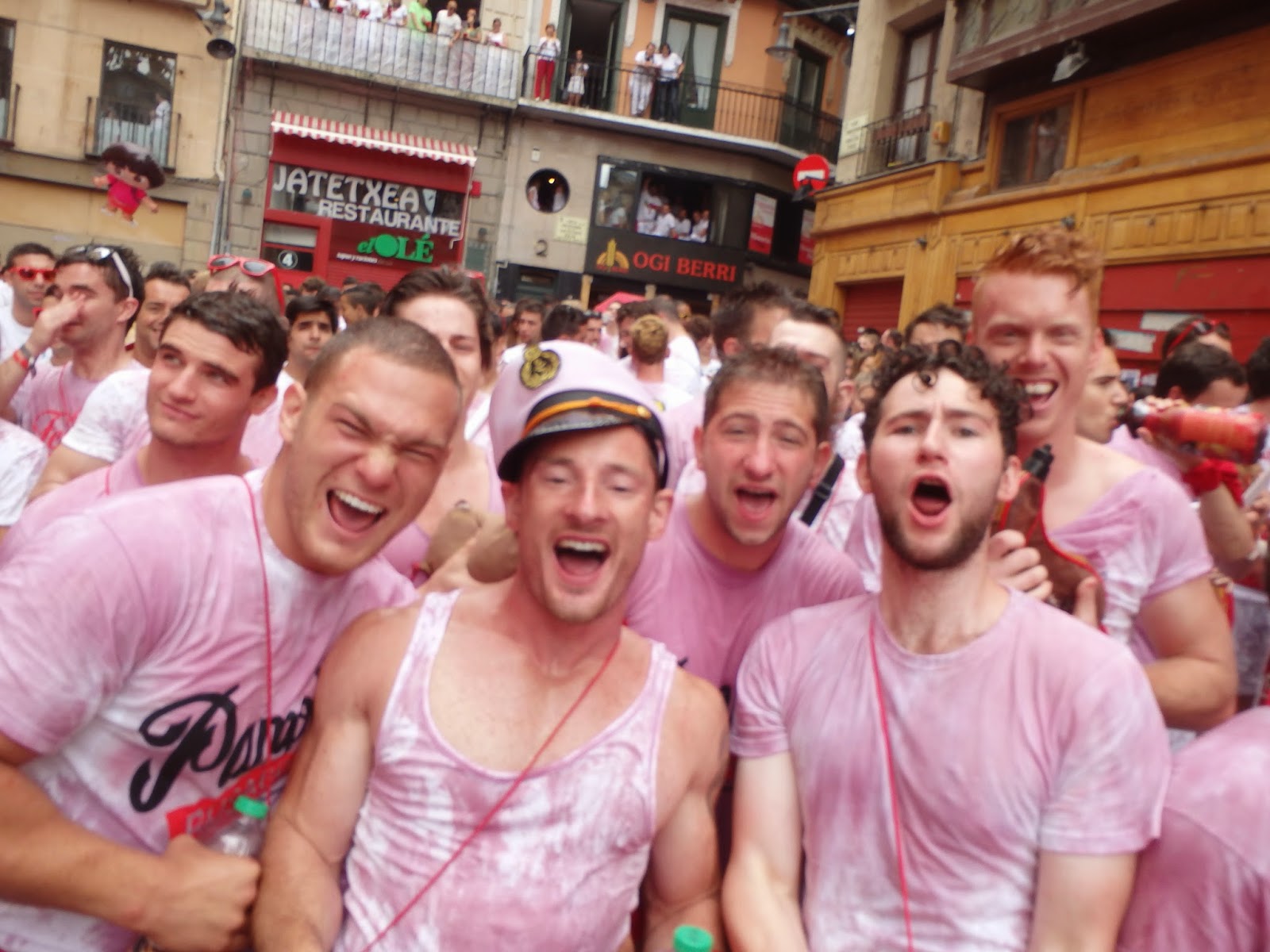 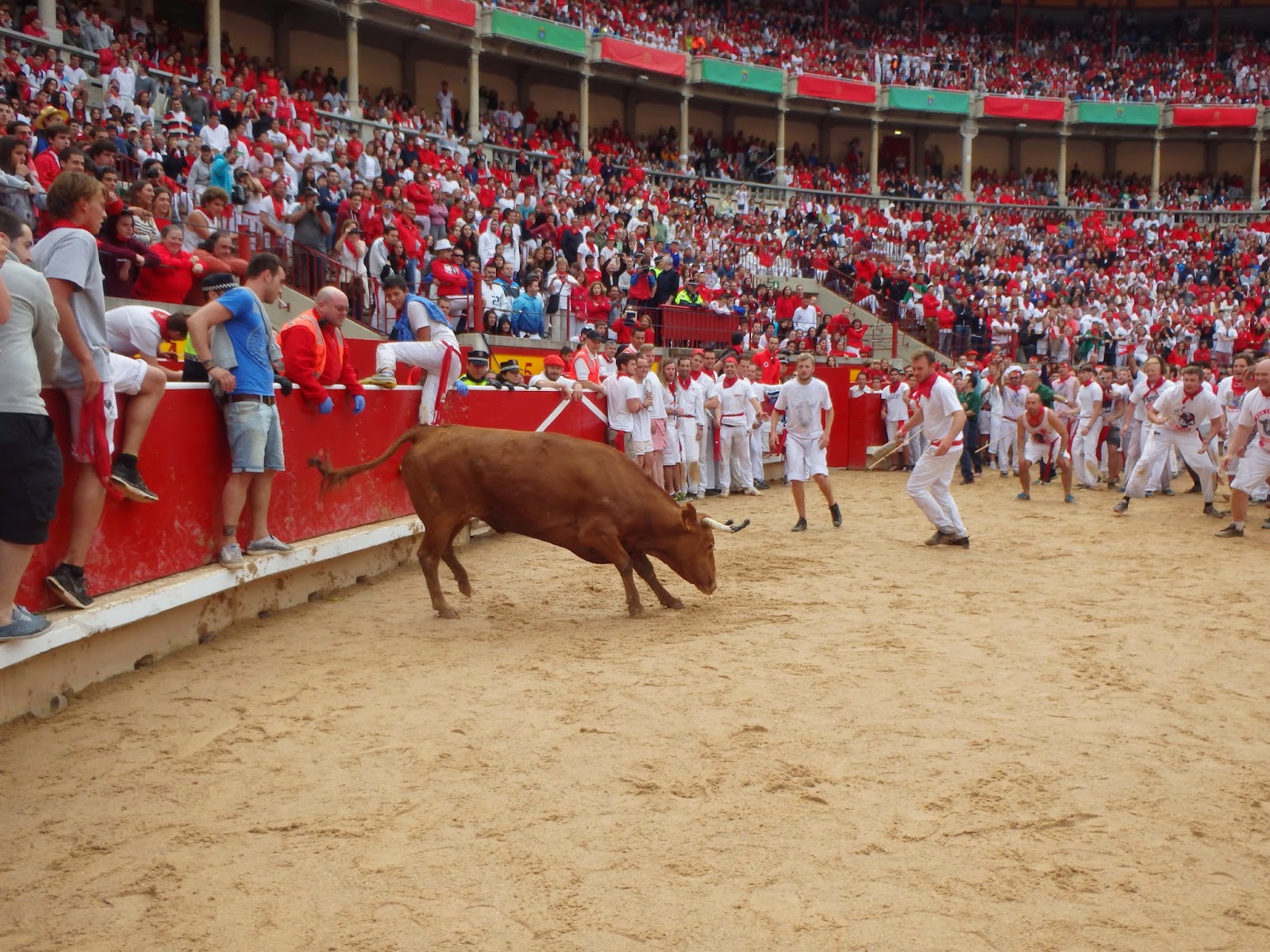 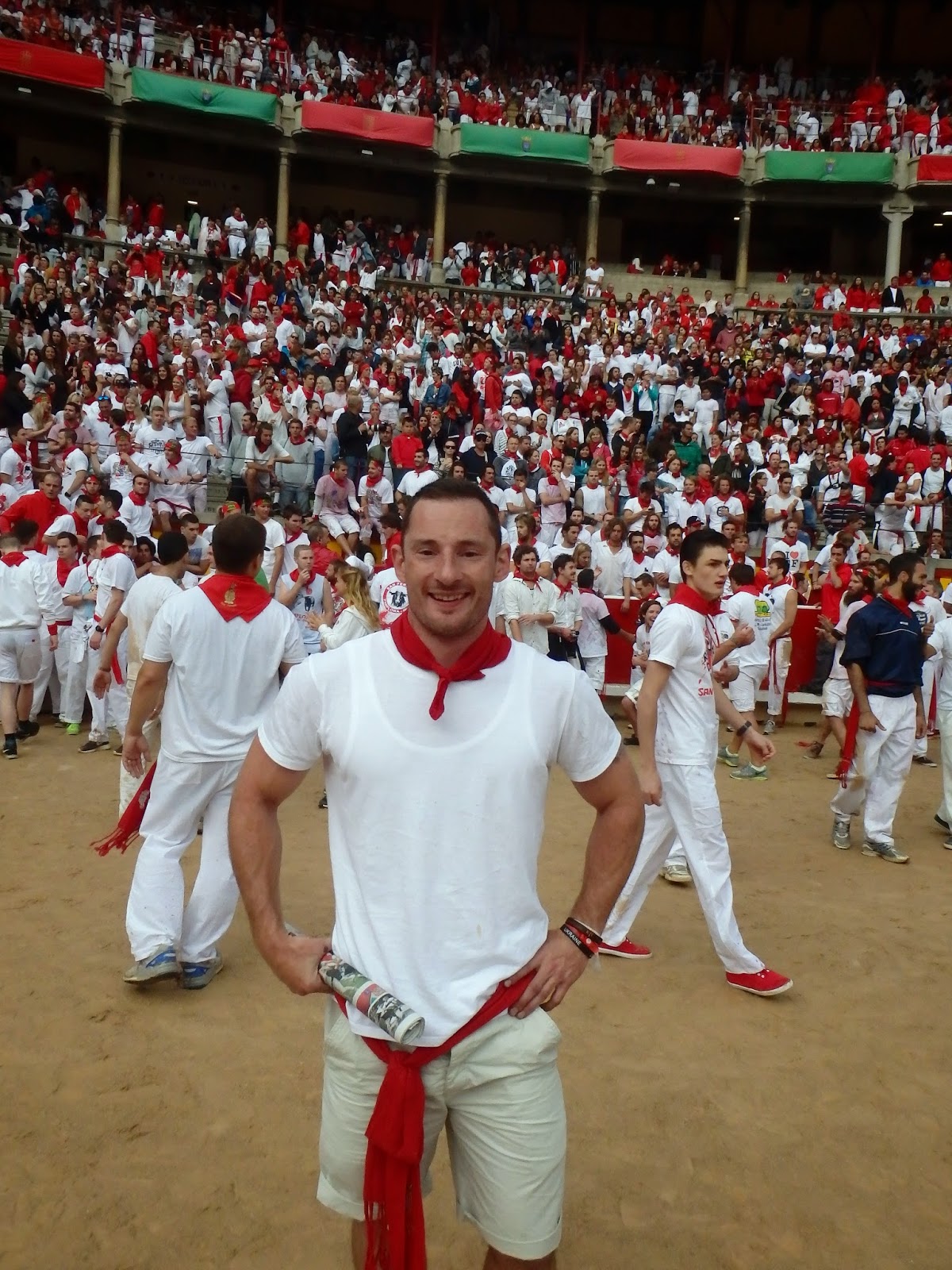 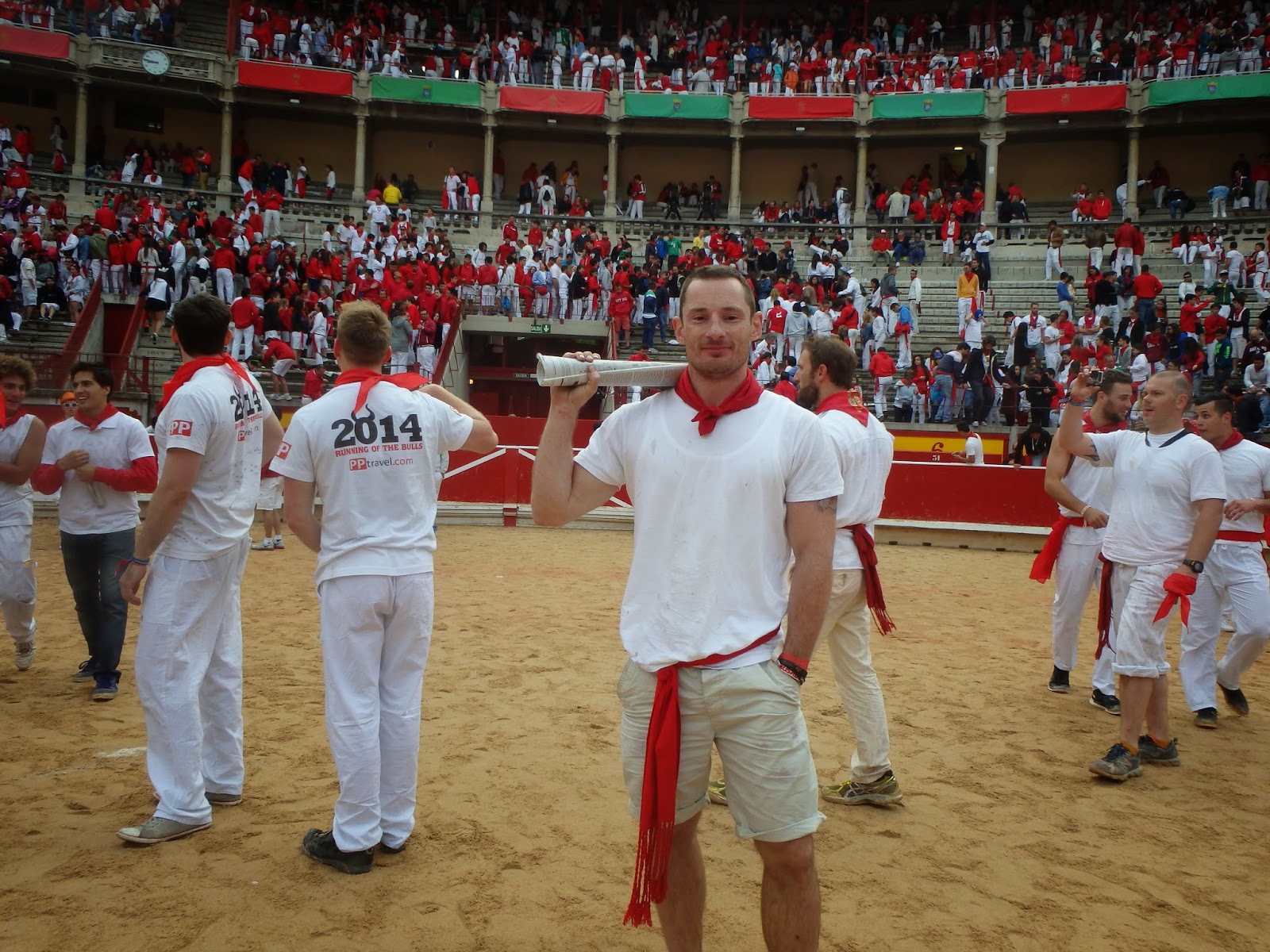 Posted by Unknown at 05:14 No comments:
Email ThisBlogThis!Share to TwitterShare to FacebookShare to Pinterest
Newer Posts Older Posts Home
Subscribe to: Posts (Atom)