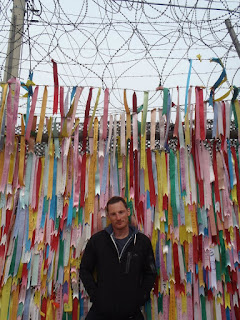 The two Koreas stand looking at each other across a heavily patrolled buffer zone. They eye each other up ominously like heavyweights before a fight. It makes for a fascinating and slightly unnerving visit. Ben Whateley-Harris went to see it for himself.


I looked out of the window as the skyscrapers and many faces sped by. The further out of Seoul we got they became fewer and farer between until there was nothing but countryside.

Officially the Korean war of 25 June 1950 – 27 July 1953 (3 years, 1 month and 2 days) never ended. There was a ceasefire and a large de-militarised zone created which separated the Korean peninsula in two, creating what we most commonly refer to as North and South Korea.

The Korean War was part of the Cold war and fought by soldiers of many countries resulting in an estimated 2.5 million civilians killed or wounded.

The de-militarised zone or DMZ as it is referred to runs for 250 kilometres from coast to coast, from the East China Sea and the Sea of Japan.

Roughly 4 kilometres wide it acts as a buffer zone between the two countries that have developed completely differently since being partitioned 60 years ago.

I arrived from the bustling metropolis and capital of South Korea Seoul. A city that hosted an Olympics and has every mod con you could imagine. From heated and auto spraying toilets to billboards that show adverts in a light show that makes Piccadilly circus look tame.

My bus travelled the 60 odd kilometres swiftly along the many laned high ways. An American on the bus remarked that there were so any lanes so that if in the case of a North invasion more tanks and troops could be transported to the border efficiently.
I later found out that it was called the Freedom highway.

My bus rolled into Imjingak, a settlement that resembled more of a theme park than a border town. There was an old looking fair with a big wheel and a swinging pirate boat. Not the sort of thing I expected to see.

Apart from bright glaring lights of the rides there were memorials and rows upon rows of large barbed wire topped fences with lush green lands beyond. 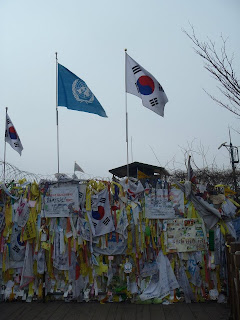 I walked up to the fence and peered through not sure what I was expecting to see on the other side.


People had tied ribbons of all colours with messages in Korean on them and tied them to the wire; they fluttered in the chilly breeze and I dug my hand in my pockets for warmth.

Imjingak is home to a remnant of the war which the authorities have turned into a display stroke memorial. A large steam train rests on a section of track under a roof. The train has rusted away with time and is riddled with bullet holes all along the sides and front. Some large holes from heavy rounds; creating large dents and holes where jagged shrapnel would have flown off. The train was one of the first victims of the Korean hostilities. Although there was a lack of information boards to read.

Wandering away from the many tourists posing with the train for photographs I sauntered over to the Liberty Bell. A large cast bell in traditional style surrounded by a wooden outbuilding of ornate carving. Once again there was not much information present so after walking round it I decided that I needed to warm myself from the now biting cold and get a coffee.

Caffeine seeped into my system as I went to tackle the next part of the Imjingak Park.
Built in 1972 in hope of reunification of the two Koreas this park has developed as a tourist mecca for Korean War enthusiast and people seeking something a little different. I spoke to a Korean tour guide who must have been about 25 and she said that most visitors here were either die hard war aficionados or didn’t care in the slightest and just wanted to see what she described as a ‘naughty uncrossable border’.

Although to call it uncrossable is a bit of a misnomer as you can get a North Korean VISA in Beijing and go on a very heavily orchestrated tour of Pyongyang for a hefty fee.

Also many people in the past have crossed on foot to escape the North and seek a better life in the south. Some arrived and were startled by the South’s technological advances and in many cases I can only think of the situation of assimilating someone into the southern culture as when I tried to show my 86 year old Grandmother how to use a computer.

Needless to say after five minutes I returned to a screen of error signs. All she was doing was flicking through pictures!

Imjingak has a visitor centre obviously and inside there are films being shown about the war and how the DMZ has become unwittingly a nature haven.

I looked back out through the wire and it was green and lush. Imagine a land once farmed being left to nature to once again re-claim it. Animals galore have benefitted and the land remains relatively unspoilt by humans. Some areas are still farmed by people from the two small villages inside the DMZ however and you can even buy DMZ rice in the gift shop along with pieces of barbed wire.

Once a propaganda film has finished running on its endless loop and the next unwitting set of viewers shuffled in I made my exit and headed back to one of the shuttle buses parked next to a crowded and dated café.

The next stop was the 3rd tunnel. A tunnel hewn from the rock and discovered by the South Korean authorities who have since seized it, blocked it up and fitted blast doors and a large bowser of water to flood the tunnel in case the North tries to invade through it.

Unlike the first two tunnels this was discovered after a defector informed the South of its existence in 1978.
Walking down the tunnel you had to don a ridiculous yellow hard hat and wander the 1.6 kilometres down to the blast door.

As I walked I passed heavily breathing Koreans and overweight tourists as they shed layers as the heat increased.
The tunnel narrowed to a point where it became single file as you reached the blast door. Large signs said ‘no photographs’ but I took the flash off and napped one anyway.

Once out in the fresh air I headed to the observation lookout point. Perched up on a ridge over the DMZ you can see the border and the fake city built by the North to show its appealing way of life off.
A large tower stood in the distance with a giant North Korean flag fluttering in the wind. Apparently it is either the biggest in the world or now second biggest flag in the world. Either way it was large.

You had to step over a yellow line to view the DMZ and once over the line photos were not allowed for spying, security and sniper reasons. I managed to get an illegal photo anyway and think I got away with it.
The shot I took shows the misty area between the two countries and the giant flag fluttering in the breeze.

Unfortunately I could not go to the joint security area. A place where the UN soldiers stand face to face with the North soldiers. Rumour has it that only the biggest, strongest and most well fed North soldiers come to this area to show their ‘superiority’.

I would have liked to have seen the room where you once inside can cross the border between North and South as you walk round a table but alas I could not today.
New North Korean leader Kim Jong Un was making his first official visit to Panmunjom and therefore the entire area was sealed off.

With not a lot to do I walked to the railway station that allows trains all the way from Seoul to arrive and patiently wait here for a time when a line will reach Pyongyang after the much talked about reunification. It’s an eerie place, far too pristine and clinical.

Built more for symbolism than practical reasons with soldiers standing guard bored and people having photos next to them.

I felt like I had missed a trick here. I had learnt something of the Korean War and that the two Korean languages are practically the same but the South’s version had just moved on with the world. I now knew that Koreans dream of unification but also like to make money from the ceasefire.

Lastly I felt that I had seen a small slice to the DMZ cake, but that was all I was allowed to have unless I came back another day. Which sadly with my flight departing tomorrow would not happen.
I left the DMZ with unanswered questions and a slight feeling of disappointment. I didn’t expect a fun fair to be there or comically shaped soldier bins for your litter.

My eyes adjusted to the speed of the bus as the rain lashed the windows en route back to Seoul. The countryside became sparser as we neared the city and the buildings encroached on the land. Soon I was back in the land of the skyscrapers and the DMZ felt like a million miles away in another land and another time.

Date - February 2012
Place - The DMZ, South Korea
Posted by Unknown at 05:53
Email ThisBlogThis!Share to TwitterShare to FacebookShare to Pinterest