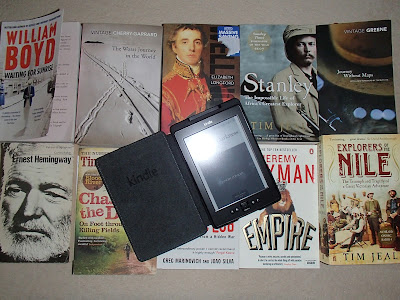 The printed word had thrilled, enthralled and shocked for many years. As technology moves on will the new e readers bring about the demise of the paperback and hardcover? Ben Whateley-Harris investigates.

In around 3200 BC in ancient Mesopotamia it is believed that the first recording of words and numbers took place.

Scriptures carved into rocks, wood and painted with animal blood and crushed up berries were the first stories told and passed down through generations. From clay to papyrus these stories would survive longer than the cultures of the people who wrote them.

Studious Monks in lonely cold monasteries, Roman and Greek scholars and Egyptian dignitaries would all record historical events for us to decipher in years to come.

Parchments slowly evolved into large bound books. Many ancient texts survive in museums to this day and in turn large books written by hand slowly over the years developed into printed text which would later become reproduced on mass and shipped worldwide.

The book is a companion, a friend, a confidant and an escape route. It always has been and always will be. But will those feelings associated with the soft worn paperback clasped in your hands be replaced by the kindle, or similar e readers on the market.

Always a book fan I have a collection far too big for my house and boxes of read books that I cannot bare to throw away collect dust in boxes in the loft and garage. Each book ages like a human’s face. The more they are read the more lines and wrinkles appear. Giving them a character and friendly feel.

A paperback can be folded into a back pocket, slipped into a jacket and used as a coaster. T basically can be abused bend back on its spine and lent on. Packed into bags with the knowledge that they will not get damaged. Waiting to be pulled out and read at any moment.

An electronic reader can still be slipped into a pocket but you have that fear of sitting on it and breaking it. It must be backed safely and also have a cover for screen protection. Some covers offer maximum protection while others can be flimsy like a dust sheet off a hard back that usually gets removed until the book is finished.

For me I am and always will be a books man. A good book can make your day and fill those hours when there is nothing to do. Taken anywhere it can be a saviour. I love the feel of the paper pages in the fingers and the turning of the pages.

For me the e-reader was a fad, a thing a little too fancy to last; something that would die out.
Until I got one. My Christmas present from a friend was a kindle. Small in size with a leather case with attached light. It was lightweight and easy to use. I wasn’t completely sold with is until I went online to look at the books I could get. Classics galore were free while other books that were over ten pounds in the shops were for sale for 75% less. I was sold.

Searching through the top 100 free and typing words to match my literary interests into the search bar I uploaded book after book and spent hardly any money at all. Novels for twenty pence and epic travel adventures such as Ernest Shackleton’s South were free.

Soon there was 30 books on the device and I was ready to settle down and read them. But I didn’t!
Instead I sat down and read a book that I had not yet started. Then when that was finished I read the sequel and then the paperback copy of a book which inspired that one.

Then as a present the same person who bought me the kindle; bought me a paperback which I duly read.

Until one cold and very wet day.

I had been reading books about retracing Henry Morton Stanley’s route through what would become the Democratic Republic of Congo. I also read his original accounts and wanted to read Joseph Conrad’s Heart of Darkness. A novel set on the Congo River after Stanley had set in motion what would become Belgian rule.

I knew I had this book in paperback somewhere. I searched high and low and could not find it. I looked on shelves and in boxes knowing that I had seen it recently.
A quick search online showed me that the book was free for the kindle so I duly downloaded it and synced it to the device. It must have felt strange suddenly after so long being thrust into action.

The book downloaded I settled down to read it.
It takes a while to get used to pressing buttons than turning pages. It becomes a conscious effort to press the correct button and not automatically reach out your fingers to grab a page.

You are aware that this is not a book and something deep inside you does not feel quite right about reading it on a screen.

Then something clicks. As if a light goes on in your brain. That switch was at 3.40pm on a Tuesday afternoon. I had suddenly become a kindle man.
It became enjoyable and I forgot that it was a machine I was looking at and I was transfixed by the words and taken deep into the story. As if I was on that boat in the Congo avoiding sandbanks.
One click and the device can be locked as if a book mark has been placed and you can resume whenever as easy as pie.

I didn’t feel guilty for abandoning a paper book; I assumed I would feel dirty as though I am having an affair from my one true love. Instead I felt liberated and as though I had joined the technologically advanced.
Paper books will be my first love and I will always go back to them. They look amazing on a shelf and can be taken anywhere. Especially on long trips where you need a power supply for a kindle. Although you can argue that you need batteries for a book.

The only argument I have that makes books come out on top so far is that you can read them by the light of a wind up torch and they are more robust than a kindle. If they kindle had a solar power charger or even a wind up one then the gap would be closer.

Kindle’s and e-readers are the future. They are cheaper in the long run and possibly more environmentally friendly. I cannot say for sure as I don’t exactly know what goes into making them. It could be the same argument as the Prius car. In that even though they are good for the environment they produce so much carbon when manufacturing them. This could be the case with a kindle when compared to the environmental impact of felling trees to create books. For me I can see both sides to the argument.

I could not however chose one over the other because both have their advantages and similarly their disadvantages.

Although I know that if asked I would always say I am a book man over saying that I am a kindle man. But that could be because I have grown up with books and the kindle is new; but definitely here to stay.

Posted by Unknown at 08:06
Email ThisBlogThis!Share to TwitterShare to FacebookShare to Pinterest