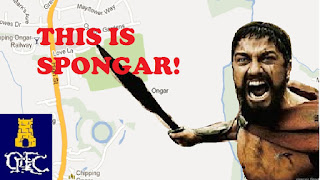 Ongar bounced back from their defeat against the many faces of Ilford Wanderers and the two week layoff due to snow with a stonking victory against Writtle.

They recorded their biggest victory since the 100 -0 thrashing of Ravens back in 2008. It was the clubs second highest score ever after a 113 -0 victory against a team called Orwell when Ongar played in black and white and Mark Jones had knees.
However Ongar could and should have broken that record but the match ended ten minutes early.

After frozen pitch, snow drifts and Jeddy leading Aaron Hardy off on a merry dance across the channel it was nice to get back on the field of play and pull on the blue and gold shirt.

A fresh faced young Ongar team rocked up to Writtle eager for blood. Only 4 players were over the majestic age of 30 in the match day squad and we fielded a few teenagers to boot.
They were incredibly up for the game as even the perennially late changer Michael Blake had managed to squeeze himself into his kit at 9am.

Ongar started very brightly, Jeddy was playing like a demon after his discovery of Richard III’s body in a Leicester car park.

Writtle kicked off and after what seemed a matter of seconds Simon Franklin did his usual. Not his usual as in doing his business in the local knowledge wagon; his usual as he ran, no one caught him and he scored.
Two early tries allowed Aaron Hardy to slot over the extras but then tragedy befell Aaron. Our usual saviour at ten, our hero, our leader on the field and our protector of the faith was down injured and crying like a child who had lost their favourite Dave Blake action figure.
Aaron ran with the ball and suddenly fell down like Neil Springate’s trousers in public. He let out a terrifying scream that set all the rooks in the nearby trees flying away.
Aaron lay in a pool of his own tears and was gingerly helped off the pitch. By that I mean he was carried off and was not chased off by Jeddy.

He lay howling on the side-lines with rage that he had let his team down. While everyone on the pitch sighed with relief as now we had a replacement ten who could pass and wasn’t associated with the peeping Tom alliance group.

Carl Regelous who had arrived late was thrust into the action and came off the bench to fill in at full back while everyone’s favourite Joey Barton look-a-like and clinical test victim Jack Smith filled in at ten.
Carl made an immediate impact when Jack lofted the ball down the pitch. Ben Whateley-Harris chased the ball and beat the entire Writtle team bar the scrum half to the ball. Writtle’s scrum half picked the ball up off the ground, stood up, turned round and was flattened like the Beast of Brentwood falling on Tom Bristow.
The ball flew out of his hands and bobbled nicely for the onrushing Carl who put the ball between the posts for a simple try.
Simon then started to run around with his man udders swaying in the breeze and had added another try before you could say ‘Jeddy Jeddy Bang Bang’.
Dave Blake then got in on the action and muscled his way through some tackles to shrug off the opposition and score in the corner.

Jack Smith failed with his attempts at converting so Ralton Fenner was promoted to chief raspberry picker and kicker for the match. Jack said he had a touch of the Brentwood wobbles and his kicking feet had gone to jelly.

Tom Bristow then scored in the corner and smiled like a loon after doing so. He was so happy that afterwards he sabotaged the super bowl and made the silly American version of ‘rugby’ delay their game by a whole 34 minutes.

The first half became a try fest; to be honest it was ridiculous, there were far too many scores to remember.
Jack Smith squeezed one in and celebrated by abstaining from touching Michael Blake for the rest of the match.
Simon Franklin now had been identified as the danger man by Writtle who had two men marking him. Therefore he received the ball and instead of running he waited for the two defenders to commit themselves before off-loading to Ben Whateley-Harris who ran through to score under the posts.
Then Ben Whateley-Harris intercepted a pass from the Writtle ten to the centre and ran clear through to score almost moments later.
It was becoming a free for all in the try scoring stakes at the point. Michael Blake had taken off his socks and was counting his toes to try and keep up.
Blakey did however lead from the front and gave a great example in the pack.
Unlike when he coached the minis the next day. He shouted instructions on the side-lines while eating a pork pie. This part is actually true!

As Writtle practiced their restarts, every time Big Jack Burton practiced his high ball gathering and then charging. It took Writtle a great effort to get him down and then once they had they had to deal with Sam Minns rampaging towards them.
Sam Minns was playing today straight from his appearance on Splash! The celebrity diving competition, he was so diving mad that he still had his speedos on during the game.
His triple duck somersault belly flop scored highly with the judges but he was eliminated by the public vote who kept Eddie ‘the eagle’ Edwards in instead.
Alan Elvin was his usual fat, lazy, slovenly, unfit self. His chubby body lumbered round the pitch not wanting to be in the game at all.  He scored a try early on by plodding over the line, wheezing and whining like Michael Blake outside a closed sweet shop.
Then Alan suddenly popped up out of a maul with the ball. Writtle looked at him and thought that the game had stopped. Michael Blake was arguing with a Writtle player but the game was still flowing. Alan started to skip along jokingly and then realised that the ball was still in play. So he skipped over the line in a rather effeminate manner unchallenged and scored the most camp Ongar try of all time. It must be something to do with his Michael Blake all you can eat training methods.

Every so often Writtle would clear their lines and the ball would go into touch for a lineout.
The line would be formed and Jeddy was lifted. Each time he did so it was like the lighting of the Olympic flame. His beautiful body was hoisted aloft to the noise of harps and cheers from his adoring female fans on the side lines.
Jeddy caused so much hassle on the side lines with all the cheering and the 38 pitch invasions by giddy teenage One Direction fans that he had to be taken off to sign autographs.
Coming on in his place was none other than the destroyer of Persians and everyone’s favourite poundshop Spartan Dave Lewis. He trotted on greased up wearing a utility belt and a beard that he had stolen of Brian Blessed.
I have no idea what the score was at half time but it was a lot to nought.

Writtle had their moments and at one point Ongar were pinned to their line. They used their strengths well. They were bulky, strong and experienced. But Ongar weathered the squall and came back at them harder and faster  with the momentum of Big Jack trying to get skinny jeans on.

The second half started slowly and it was as though both teams were feeling each other up for weaknesses. Then Ongar realised that they had 60 plus points on the board and Ben Whateley-Harris ran past half the Writtle team to score and then be told to slow down by the referee.
Simon popped up with another try and Ben Whateley-Harris scored his fourth before Simon matched that mark. Both were tries caused by shear speed and good finishing.

Ben then went for his fifth but somehow fell over just before the line, he did however pop the ball to Tom Bristow who scored his second of the game and for that moment was the happiest man alive. Then he had a beast of Brentwood flashback and became a depressive again.
Sam Minns was quite miffed that Ben popped the ball to Chode rather than him!

Dave Blake scored another powerful try in the corner before John Berry rolled back the years and set off like a wounded gazelle.
He covered a phenomenal amount of ground before being brought down. He did however his fast break he set up someone who scored.  At this point I have no idea what else happened in the game.

People scored, Ongar dominated the scrums and Big Jack gathered everything in the air. Ronnie Plumb had a great game and Neil Springate also put in a shift in the pack playing a half each.
Jason Field started and was replaced late on by Club captain Ian Springate who was resting himself after an unfortunate incident where he caught himself in the car boot door.
The final whistle sounded and John Minns had a smile on his face. Ongar had been, ruthless and clinical. But they had also used their heads, played as a unit and played more importantly as a team.
No one had said a word out of turn and the atmosphere in the changing room after was one of joy and chest thumping proud achievement.
Everyone played outstanding and was playing for their places next week. No one backed down, every tackle was made and every tackle hurt a member of the opposition.
We must salute the opposition as they played with guts and grace in defeat. They were nice bunch and gave us a fair and honest game.
Ongar may not have broken a record with their score but they broke Penny Blake’s heart as it was her birthday.

Remember lads, we need to get down to training this week as the next game will be harder, faster and a whole different kettle of Jeddy Fish. 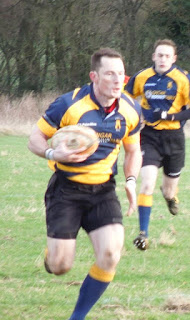 As the sun set and we headed off to watch England beat the Sweaty Socks Dave Lewis and Jason Field rode on Neil Springate’s back  into the sunset
Posted by Unknown at 11:11
Email ThisBlogThis!Share to TwitterShare to FacebookShare to Pinterest