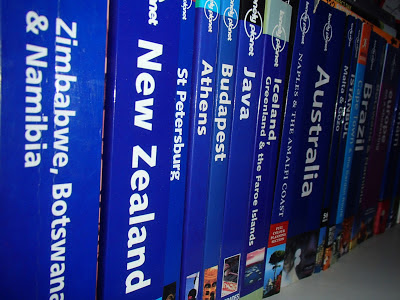 Travelling has opened up the world so much; that the guidebook industry is massive. But as more people travel overseas new problems develop. Ben Whateley-Harris investigates

Backpackers depart from all over the world, to see new sights, experience different cultures and ultimately live their travel dreams.

The backpacking phenomenon has its critics; many backpackers do not travel to other parts of the word to immerse themselves in a foreign culture, they simply bring their culture with them. Therefore countries often suffer from the influx of tourists who are ambivalent about their values and needs.

Lonely planet publications have been criticised for creating the travel craze that is sweeping the world. Co-founder Tony Wheeler admits that they are responsible for the masses of backpackers heading to certain destinations.

In his book; Backpacking: Diversity and change, published in 2003, author Erik Cohen states: “Even though that one of the primary aims of backpacking is to seek the authentic, the majority of backpackers spend most of their time interacting with other backpackers and interactions with locals are of secondary importance.”

Guidebooks are synonymous with the travel industry; where there is a destination there are a dozen guidebooks. Even destinations deemed risky and volatile still have guidebooks. Lonely Planet was lambasted in the press 4 years ago for publishing a book on Burma (Myanmar), which many critics said promoted the current military regime.

Former Lonely Planet authors have also joined the criticism that surrounds the mass arrival of travellers to publicised lonely planet guide destinations. Other handbooks have also been to blame. For example the Brazilian coastal town of Jericuacuara was a small sleepy paradise unknown to travellers until the 1991 South American Handbook (hardcover, 67th edition) described it as: “one of Brazil’s most secluded, primitive, beaches. Increasingly popular among travellers and Brazilians. It is so quaint that pigs, chickens and donkeys roam the street.”

The 2005 Lonely Planet Brazil says of the town, “a small fishing village popular among backpackers, hip Brazilians, and windsurfers. A beautiful spot where dozens of palms drowning in sand dunes face traditional fishing boats.”
Thomas Kohnstamm wrote for Lonely Planet and disliked the way travellers en mass would bombard a town after a guidebook had publicised it so. In 2008 in his book Do Travel Writers Go To Hell he said of Jericuacuara: “The Locals have watched the place mushroom from a charming yet soporific outpost that didn’t even have regular electricity until 1998 to an international hot spot, complete with beach yoga and crepe restaurants. Locals are side-lined as undesirable obstructions to Jericuacuara’s development, living farther and farther from the central part of town.”
Do guidebooks ruin a destination by bringing with them unwanted travellers who ruin the originality of a place and bring more problems than the local community can handle. Or do they bring valuable lifeblood in to the area enabling development and progress?

The tongue in cheek name of this trail comes from the sweet breakfast served along the route found in countries from Vietnam to Thailand and beyond.

Although there is no firm definition to locate the banana pancake trail the metaphor name is used for the ever-developing travellers trail heading through many different places in South East Asia. There are even arguments that the trail has crept into China and as far down as Fraser Island in Australia. The banana pancake is not indigenous to Australia or China, but the countries are now becoming synonymous with the trail.
Many places have changed forever; the rural has become the urbanised and local jobs have turned from traditional to that of catering for the increasing number of backpacker’s arrivals.

Vang Vieng in Laos was once a small village nestling on the banks of the Namsong River. After numerous praise in guidebooks such as the Lonely Planet the town has grown to be known as a ‘backpackers ghetto’. What was once a sleepy backwater visited only as a stopgap between the capital Vientiane and the world heritage city of Luang Prabang has changed beyond recognition.

With the influx of travellers into an area the demand to house and feed them becomes heavier by the year. One of the main factors affecting local people is that the more travellers who come, the more opportunities for commercial developments will arise. Many developments will be from outside the area and locals will not see the financial benefit. Entrepreneurs will seek to exploit these by building fast food chains, surf shops and guesthouses.

Laos, a communist country does not have big multinational food chains but that hasn’t stopped people outside the areas cashing in on the tourist and backpacker trade. Outside capital from the cities has been put into the town in the forms of restaurants, all privately owned and not owned by the locals who have sold their land for a small fee.

The backpacker may have trampled and stamped their mark on the trail, but now tour operators are cashing in on Viang Vieng’s popularity bringing with them buses of travellers and block hotel reservations. Meanwhile backpackers spend their money in bars owned by hotels, and not the local bars that are in most need.
Even in fiction the Lonely Planet has been lambasted for creating over development in areas of once tranquil idyllic beauty. In the Thailand set book ‘The beach’ by British author Alex Garland he writes, “There's no way you can keep it out of the Lonely Planet, and once that happens, it's countdown to doomsday’’.

Independent Travel
Whether you’re sipping a coke liberally splashed with samsong whiskey in Bangkok’s Khoa San Road or inter-railing around Europe you will see the lonely planet on the table in front of many travellers.

It would be misleading to say that Lonely Planet has spurred the huge growth in travel, though its impact is undeniable. Other guidebooks and cheaper airfares mean that the world has few places left that are unspoilt or not commercial.

In an interview on Lonely Planet’s website co-founder Tony Wheeler said: “I don't think Singapore Airlines buys new jumbos just because we did Southeast Asia on a Shoestring.”

Times have changed since the first Lonely Planet books were published in the 1970s. More people have the disposable income to see the world and inevitably want to travel and take a guidebook with them. However one of the original Lonely Planet Authors Joe Cummings counters that most people who buy the books never put them to use; “The vast majority are armchair travellers.”

People still travel without guidebooks, seeing them as soft options. Some people delve into travel with a passion and a hatred of publications such as Lonely Planet and Rough Guides. They simply immerse themselves and learn as they go.
This is time consuming and risky, Thomas Kohnstamm’s Do Travel Writers Go To Hell, says of that approach: “Only a small percentage of travellers have the time and skill to travel with nothing more than a dictionary and a map”.

Guidebooks help those travelling to settle into a rhythm and survive exploring areas where they know little or none of the language. This may be due to the fact that backpackers and travellers seem to follow a similar route and meet up, enabling them to network and gather information from one another.
Few people (especially in Britain)have the mastery of foreign languages to get all the information that they need from conversations on the street. Therefore guidebooks will continue to sell and be treated as the traveller’s bible. Despite being voted second behind DK Eyewitness Travel guides in Wanderlust magazines guidebooks of the year, Lonely Planet’s sales are still as high as ever.

The choice is up to the individual whether they use a guidebook or not. Not everyone is a seasoned traveller or has the necessary language skills they need

Many people have never experienced another culture and need the advice and help available in guidebooks. It can be a companion, friend, trusted ally and most of all, the hero in a traveller’s hour of need. Imagine turning up late at night in a remote Mexican village and not knowing where to stay. A guidebook will help you.

While some people consider guidebooks a hindrance that brings far too many people to the same locations, ultimately the choice is up to you. It all depends on where you are; where you want to go and how ‘independent’ you think you want the process of getting there to be.
In the end guidebooks are here for the long haul; especially Lonely Planet who are owned by the BBC.

Posted by Unknown at 04:14
Email ThisBlogThis!Share to TwitterShare to FacebookShare to Pinterest