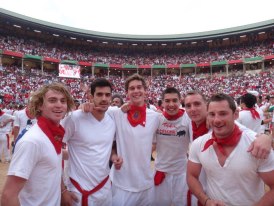 The crowds are bustling, you cannot move.

If one person pushes the crowd surges and the entire section moves.

Sometimes you move ten feet without touching the floor, carried along in the crowd.

The expectation reaches an all-time high just before the gun sounds.

Then suddenly you run; you try and run but the crowd surges and pushes.

Bodies fall to the ground and people are trampled.

The bulls tear down on you and knock anyone flying out of the way.

They trample, gore and smash people in all directions.

When the bulls get to dead man’s corner they stumble and some fall.

People are literally fighting to get out of their way.

We made it past as the bulls were behind us and soon they had overtaken being herded and chased by the stick wielding 'pastores'.

We hurtle after them as people shout 'arriba' and bear down onto the arena.

Last year we didn't make it in. But this year I was determined to.

We entered the capacity arena and it made you feel like a rock star as the crowds cheered.

Everyone who got inside waited in anticipation for the younger more aggressive bulls to be released and then suddenly one tears out into the arena.

These young steers must have been provoked because they go mental.

They charged at you and twist and turn and throw people into the air.

The crowd cheers and people (Including me) run up to the bulls and slap them on the arse.

Some crazy locals even jump the bulls.

Six youngsters are released one at a time and each one is more mental than the last.

So by the time number six emerges you are shattered but have had the all-time high of your life.

Especially when they charge at you and you somehow dodge them.

Epic fun and I want to go back and do it all again. 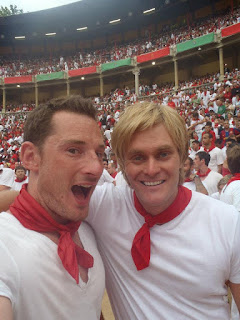