A quiet place in Istanbul 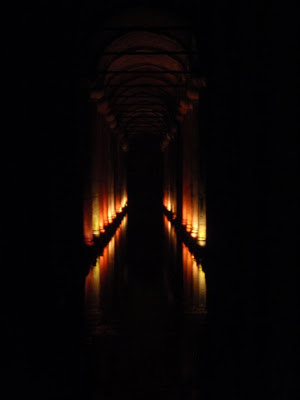 Istanbul famously is the city that straddles two continents. A busy and hectic place where a weekend is not enough to see all on offer. Ben Whateley-Harris took a step back from the busy noisy city to discover a place so quiet that you almost forget where you are.

Arriving in Istanbul you will notice the taxi drivers are almost on a par with Egypt. The pre requisite to passing an MOT seems to be a working horn.

The horn is constantly in action and even when you are safely out of the taxi and looking up in wonder at the Hagia Sofia your ears ring with the noise of horns being hammered by overzealous palms.

Istanbul is a beautiful city but a very noisy one. I do not mean the call to prayer; that sound suits this ancient wonder. In my travels Damascus was the loudest call to prayer I had ever heard.
My room in a shabby hotel was surrounded my mosques and they all started at once in the darkness of the night. I woke with a start thinking it was an air raid but slowly realisation dawned on me and I drifted back to sleep with my ears ringing.

Istanbul offers attractions galore; from the Galata Tower to the Blue Mosque. Markets, bazaars and of course the Bosporus are all places that tourists flock to.

After a while though you get disillusioned with the crowds and the bustling city life; you need to take a step back and retreat. You have sipped teas and coffees from stalls and watched the world go by but you have not escaped the noise.

This is when I discovered a gem that no one who had been to Istanbul had told me about. A hidden underworld where you can get lost in thought and recollection.

Situated only a stone’s throw from the Hagia Sofia is a hidden underworld which lay tantalisingly close yet so very far away for many, many years.

Walking across a crowded street dodging and weaving through cars you arrive at an unassuming entrance. After paying the nominal entrance fee you descend down and the noise behind you grows fainter.

A metal set of stairs leads you into a subterranean world hidden from the hectic modern life above.
You have arrived in the Basilica Cistern. The largest of the underground cisterns built in ancient Constantinople during the reign of Emperor Justinian of the Byzantine era.

Ancient records state that over 7000 slaves were used in the construction of the cistern.

After years of being lost to the growing city which had become Istanbul above the cistern was re-discovered when scientists noticed how local would catch fish from holes in their gardens.

When the first scientific team explored the re-discovered cistern it was littered with debris and even the odd dead body.

Clean, restored and opened to the public it is now a tranquil sight to behold.

You descend the metal steps and the noise echoes around the cavern.

Pillars in rows disappear into the darkness and are lightly lit to give them an ethereal glow.

The drips from the ceiling plop into the water and create smooth ripples that you follow with your eyes, mesmerised in a hypnotic state as you stare at them for what feels like an age.

The noise of the city above is now a thing of the past as you are surrounded by the sound of drips and gentle splashes of water. A tranquillity surrounds you, wraps you in a blanket and your fears and apprehensions of the outside world rescind.

I found I could stand and stare at the long lines of columns reaching out into the darkness for ages. There were no time constraints and no deadlines. I just stood looking and soaking up the cool temperature that was a relief from the city above.

The air was clean and crisp and when you looked into the waters of the cistern fish slowly ghosted past without disturbing the water.

I followed the columns and the pathway, passing silent onlookers and some fiddling with cameras or looking for small change to drop into the cistern making a gratifying plop when the cons entered the waters.

At the end were two large carved bases to the columns. Both were the head of Medusa. Her serpents were carved round and base and her eyes wide open. Although there was no snarl or fanged teeth on show. She looked calm and tranquil to match her surroundings.

She was slightly green from the atmosphere but that wasn’t the most impressing thing about her. One of the Medusa heads was upside down. Somehow it suited this quiet place. The water gently caressing her forehead and the coins in it sparkling in the little light there was. 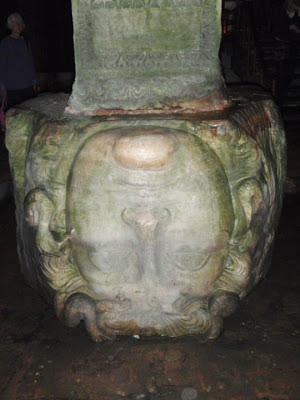 I didn’t want to leave. I was captivated and bewitched with this island of tranquillity hidden underneath a city so vast that she spreads two continents.

I knew that I would have to come out, enter the light and noise blanket that suddenly wraps itself over your head. This could wait however as I perched leaning on a railing emptying my mind and looking, just looking.

Taking in every inch, staring into the lightly shimmering water and only blinking when a fish appeared and inched past making your eyes readjust.

Every now and then you find somewhere that puts a smile on your face. A smile of contentment, a smile of peace and quiet and calmness.

For me I had found it among the bustle of somewhere I would never have expected to find it.
Finally I ascended the stairs and the bright light of day made me squint.

Now for the onslaught on my ears to begin once again!


Date - May 2010
Place - Istanbul, Turkey
Posted by Unknown at 04:01
Email ThisBlogThis!Share to TwitterShare to FacebookShare to Pinterest