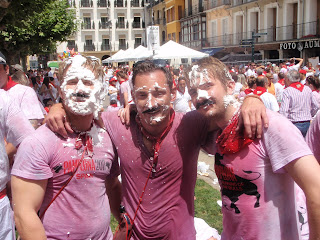 My eyes stung and I was soaked to the skin.

I opened them narrowly and saw another burst of red liquid come flying in my direction.

It splattered against my face further drenching my clothing.

As I did so a massive smile spread across my face.

Here I stood in a mass of bodies, covered from head to toe in Sangria and cheering.

The throng of bodies moved as one massive pulsating organism.

I was having the time of my life and looked into the eyes of my companions and knew that that feeling was reciprocated.

A feeling of euphoric bliss came over me, I was possibly the happiest I had ever been.

The happiest I had ever been while covered in sticky sangria, dressed in what was once white clothing and sporting a neckerchief.

There could only be one place in the world where I was now.

The opening ceremony of the Festival of San Fermin; in Pamplona in the Basque Country.

What started out as thousands gathering in to the main square to see the bands march past and the idols being slowly progressed through the thronging streets had descended into unlimited, chaotic, beautiful madness.

Sangria being sold for a Euro for two litres was being purchased as if it was soon to be banned and was liberally being thrown over people as well as down throats.

Our group watched as people jumped from statues into the crowd and were caught with arms outstretched and cries of ‘Viva Tora’.

Pandemonium ensued. The main square was swamped with people and they later estimated that a million souls were in the city that day.

Large inflatable balls filled the air and were joyfully punched around the crowd.

Giant flags were unfurled and moved across the crowd. One moment you were in the blazing sun and the next in the shade under a giant flag proclaiming independence for the Basque country.

Every balcony was filled to the brim with people all resplendent in white, for the sangria could not reach that high.

Balconies had TV crews peering out and filming the festivities below, where people got on shoulders and many lost shoes in the bustling and pushing.

The crowds pulsated with energy and life. The noise was deafening and reverberated off the high walls of the surrounding buildings.

With so many bodies so close together it is remarkable that no one gets injured. I am sure they do but I never saw any evidence of it.

The police and street cleaners dance with the locals and foreigners who have some for the spectacle and old and young shake hands and slap backs.
The air is alive with happiness and mutual feelings of fun which make life the more enjoyable.

Hemingway aficionados sporting beards minger with the crowds and pose next to his statue. They are given a regal welcome and treated almost as if the great writer himself had returned.

His spirit lives on and when he wrote that there was a feeling of no consequences in your actions as the festival literally started with an explosion of life.

You could see that those immortal lines have lasted the years and are as relevant today as when he first penned them.

You step away from the hubbub of the main square and the back streets are just as lively.

People throw  buckets of water out of windows to the crowd below waiting with outstretched arms becoming for a refreshing soak and people jump into fountains to rinse the sangria from their matted hair.

The back streets become the routes for marching bands that play classical Basque music and then belt out a modern song converted for the brass section where everyone dances in the streets.

All of this is just the beginning, the main event is yet to come the encierro, or more popularly known as the running of the bulls.

That can wait for the time being. For now we are having too much fun. Considering the amount of alcohol we have bought we are all relatively sober because of the heat, excitement and the fact that we have thrown it over ourselves and passers-by.

You would lose a friend in the crowd and before you know it they would pop up again down another street with a new set of people. Your group would be 5 then 8 and finally 16 as you picked up people you knew from the campsite where we were staying.

Smiles ruled and fun was the master for this day.

It truly was a day like never before and one of the reasons I am going again this year.

What the newspaper said about our trip
Posted by Unknown at 07:07
Email ThisBlogThis!Share to TwitterShare to FacebookShare to Pinterest