There is something dark in all of us.

You disagree? Well I beg to differ; we may not all have evil ways lurking behind our exterior facial expressions. We do however have a thing called curiosity and a morbid fascination with death, tragedy and things that are dark.

Dom Joly recently published his book The Dark Tourist where he travelled the world visiting places of genocide, murder and horror.

﻿ He visited Auschwitz, The Killing Fields, Chernobyl, Rwanda and even the grassy knoll of JFK fame.

No matter how peaceful, enlightened and calm you are. Everyone will turn there attention to bad news and disasters.

You cannot help it; it is only human to watch as the TVs of the world show scenes of carnage on the streets of Damascus or Colonel Gadaffi's body as it is brutally beaten and then put in cold storage for the world's media to see.

We are just made like that and watch in shock and awe.

Some are more inquisitive however and visit these places in what has become termed Dark Tourism. The term was first coined by Professors John Lennon and Malcolm Foley of Glasgow Caledonian University in the 1990s.

It is a subject that has debatable values.

I have visited three such places and had very mixed emotions.

Auschwitz in Poland, the Killing Fields and Tuel Sleng prison in Cambodia and lastly Ground Zero in New York City.
﻿﻿
Each one affected me in a personal way and each one made me want to know more. It made me want to understand why this happened. Surely this is a good thing if it makes a person ask questions.

Dark Tourism is good if it is educational. Teaching the young about the horrors of the past and why we must never repeat them. It can also be exploitive where traders flog rubble from the twin towers on the streets of New York to make a quick buck.

I visited the site of the world trade center  now called ground Zero in 2002. Under a year had passed since the attacks and it was a very sombre and chilling place. I was moved by the t shirts, posters, banners and pictures of hope and love on the railings. This at the age of almost 20 was my first real taste of Dark Tourism and it felt strange to stand here.

I know I needed to go there and see the place. I was in New York after all and it felt like a pilgrimage to pay my respects to an event that the world watched live on TV.

Teaching youngsters is a great thing and using the money collected from entrance fees to build schools, hospitals and other worthwhile projects is also commendable.


This however is not always the case. Putting the New York rubble sellers aside for the moment I want to turn my attention to the Killing Fields at Cheoung Ek.

There are rumours that a Japanese company will buy them and raise the entrance price. I do not mind paying to go inside as long as my money goes to a good cause. Not a corporate machine.
How can you put a price on the fact that when you walk through the killing fields if you move your eyes from the fluttering butterflies that fill the air and look down you may see you are standing on a human tooth.

Bones, clothing and teeth literally poke out of the ground there. It is a harrowing reminder of how brutal mankind can be.

I travelled to Cambodia in 2012 having previously been there for a short period of time in 2007. While I went off and saw places of beauty such as the majestic temples of the Angkor archaeological park I felt it was my duty as a human behind with a conscience to visit the Killing Fields and Tuel Sleng prison otherwise known as S-21.

When I arrived at the prison I was shocked by how close to the rest of the city it was. Literally it was in the middle of a quiet suburb of the capital Phnom Penh.

It was originally a school and was converted in to a prison when the brutal Khmer Rouge regime under the leadership of Pol Pot came to power.

Their vision was to bring Cambodia into a farming middle age which they called year zero.

During their reign of terror countless people were tortured, killed and disappeared.
What makes your eyes open in disbelief is the fact that some leaders and officials are still alive and up on war crime charges in The Hague.
Only last week Leng Sary one of the Khmer Rouge’s leaders died while on trial for genocide. The 87-year old was accused of persuading exiled Cambodians to return to the country and then organising their mass killings when they returned. A purge of intellectuals. He denied the claims up until his death on March 14th.

From 1975-79 the regime ruled with terror. They reduced a once thriving country to dust.

Cambodia took a long time to recover and the scars in society are still evident.

I walked into the prison and suddenly felt cold. Barbed wire rusting in the heat and moist air covered the windows. A little old man hunched over a table sold copies of his story of incarceration under the Khmer Rouge regime inside a hut.

It was quite odd how tourists posed with him and he smiled. But behind his smile was a man who must have seen the worst kind of terrors imaginable. 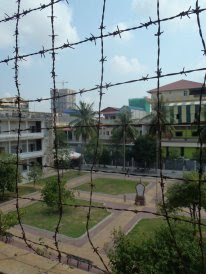 There is one thing in Tuel Sleng that makes you take a deep breath and clench your teeth. It is not the skulls in jars of victims long perished, it is not even the tiny cells where the prisoners were kept in their own filth. Nor was it the painting of torture scenes including throwing babies into the air to bayonet them.

The one thing that made me shudder was the blood stain on the floor. A thick stain still dark and almost crusty. It had been here since at least 1979 and made you bow your head in shame at what we can do to one another. 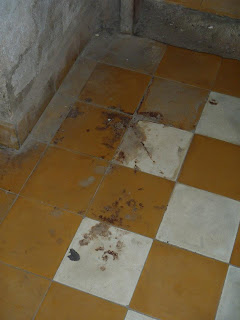 It hit home as this must have been evident to the world, it was only 3 years before I was born.
I left the prison feeling cold even though the sun shone and the air was moist.

The Killing Fields are a little tuk tuk ride out of the capital. En route you pass loads of gun alleys where for a fee you can shoot anything from AK 47S all the way up to bazookas. It is a lucrative business and one that the army seem to be cashing in on.

It didn’t feel right to me to visit a place of mass killing and then shoot a gun. I do admit that I went to a gun alley but I went before I visited the Killing Fields. I am not sure why I went, maybe it was my attempt at pretending to be Rambo for 5 minutes.

When you arrive at the Killing Fields and are greeted by a large stupa. This stupa is filled with skulls from victims who were taken here to be killed. For that fundamentally is what it was; the last place many poor Cambodians would ever see. This lush farmland was transformed into one giant grave.

Women, children and even babies were not spared and some of the horror stories that you read on the signs made a tear well in the corner of your eye.

This is where I saw the tooth on the ground and a fragment of cloth poking out of the dust. You stand still and can hear the hum of other people’s audio guides as you let the breeze hit your skin and a butterfly settles on your arm.

There was a sign saying that you should not pick up the bones because every so often they collect them all and place them in a communal grave or a box. The longer you stared at the ground the more you saw, the more they jumped out at you and the more your mind raced with thoughts all culminating in the word ‘why’?
How can we as a race do things like this?
Cheoung Ek is now a quiet place; a place of reflection. The surrounding grounds however hold a dark story.
The trouble is that when it rains the ground is washed away and a whole new assortment of remains become uncovered. 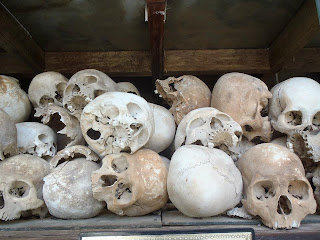 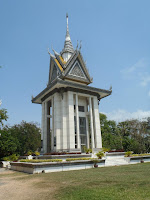 The undulating ground is now lush with plant life but lurking below the surface no one actually knows how many people died here. In the past the decaying bodies would exploded in the heat and cause the earth to move and swell.

There was a large tree of the chankiri variety; large and imposing and supply shade. This however was used to smashed children and baby’s heads in. They saved the bullets for the adults and didn’t want the children to grow up to avenge their parent’s deaths. A truly savage thing to do.
Cambodia is a beautiful country but their near past is a harrowing story of pure evil. You leave there having been through an emotional roller coaster.

Auschwitz near Krakow in Poland in my opinion should be a place all school children should visit. It is a lasting memorial to the horrors of political ideology gone mad.
The Second World War killed an estimated 60,000,000 people and shaped and scarred the planet and still does now.
I went to Auschwitz with two friends on a cold February day. There was no snow on the ground but you pulled your jacket closer to your neck and your brain could not imagine having to walk barefoot here like the poor souls who perished here had to.

I am not going to go into the evils of what happened here, everyone should know about the full details. What I want to talk about is the fact that somehow the place felt slightly too tourist attraction. 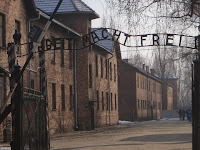 I know in reality it is a tourist attraction but the fact that Japanese tourists were posing with their typical V signs under the ‘Work sets you free sign’ made me feel a little upset. I felt that it wasn’t the place you pose in a photo. Yes take a photo of the sign but it does not require a grinning face in the shot.
I must admit I did get a photo of myself in the drill yard on Robben Island, but in it I am not smiling. Here in the Polish cold it suddenly all felt very surreal.


We had come here to pay our respects and experience it in a way that was educational and almost as if it was something you as a human being should do.

Others I suppose just see it as another part of the tourist trail.
In the end you know if it has affected you or not. No one else can tell you what to feel.
Posted by Unknown at 16:35
Email ThisBlogThis!Share to TwitterShare to FacebookShare to Pinterest