A little jaunt to Madrid 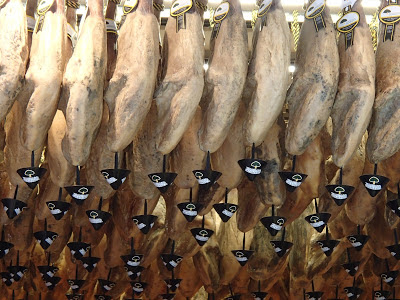 Sights such as Plaza Mayor, the Royal Palace and Puerta Del Sol the geographical centre of Spain are brilliant to see; although they are crowded, full of tourists and silly people dressed in costumes who will harrang you for money.
Therefore I wanted to see the real Madrid the Madrid that the locals knew and loved and the Madrid that kept my best friend living over there and too far away for drinks in our local pub.

To see a country through the eyes of a local is a brilliant thing. Sometimes you will fly to a place and stay with a local who is a friend. They will take you out and show you the sights. I have done this many times in London with Australians, Kiwis, Danes, Germans and even Swedes.

I took them to the regular tourist haunts where they snapped photos galore and on one occasion kept us in the pub for an extra hour just so they could hear Big Ben chime. On that occasion I wasn’t complaining!
However I always try and show my friends something new, interesting and something that no one else has seen. Somewhere they would write home about, a gem hidden to their knowledge before.

Unusually this would be Camden market but everyone knows about that now. Greenwich is another top place to take a foreigner visitor to London and lastly a lesser visited city or town.

Smaller, odder and quirkier places are the best. A quality country pub is always a winner or a British festival such as May day where they will see beards and Morris dancers and think we live in the middle ages.

This is why when I landed in Spain bleary eyed from the night before having been out for a birthday; I was glad I had been here before and seen the tourist areas. I would not have to dodge costumed annoying odd balls in squares and would not go into bars overpriced to catch out the foreign clientele.

This trip I wanted to see more of the Madrid that my friend loves. The Madrid of tapas and bars and tabernas. Also thrown in for good measure would be a trip to Toledo.

My fiend lives with his Spanish girlfriend and they have somehow managed to rent a prime piece of real estate in the shape of a small flat with a bath room that has a Perspex toilet and shower in the middle of the room. Consequently you create a silhouette when showering!

They lived just off Gran Via. The Oxford Street of Madrid. Therefore everything was accessible by either the incredibly clean metro system or walking.

Exploring back alleys and streets was the way forward and after I had met up with them and downed a refreshing pint we set off.

Of course Madrid like every city has areas that tourists descend on, some you have to pass through and others you can miss completely.
We first headed to the bus station and caught a local bus to the medieval walled city of Toledo.
Neither of them had been and wanted to go as it was a Saturday and they said Madrid would be too crowded.

The bus arrived in the outskirts and we could see the high walls of the city above us on the top of a hill. Walking up the winding roads we reached the city gates and were astounded by how quiet it was.

We explored ancient alleyways and popped into antique shops that doubled up as sword shops. The city is famous for its swords. Toledo was declared a world heritage site in 1986 and it is clear to see why. It is fantastically beautiful; surrounded by the La Mancha countryside and full of stone buildings.

Eventually we arrived at the city centre and could see the throng of tourists. Some following umbrellas and others posing in front of the cathedral.

We ducked down a side alley and explored. Suddenly we were off the tourist trail and into a world of lanes, small bars and a view of the river.

70 kilometres later we were back in Madrid and the next day after several sangrias, beers and other assorted drinks we were up and ready to explore La Latina. This is the Bohemian area that the night before we had drunk our way through.

When you explore Madrid you notice just how dapper some of the locals can be; therefore it was a delight to sup a beer with the ripped jeans crowd of La Latina.

I headed for my first tourist site of the day in the Park Del Ouests.

In 2011 I travelled to Abu Simbel in Aswan, Egypt. This breathtakingly beautiful temple was painstakingly moved from Egypt stone by stone and saved before they flooded the Nile to create lake Nasser and the Aswan dam.

Spain helped considerably financially and was rewarded by being given the Temple of Debod. A small beautiful temple consisting of a main chamber and two outside arches.

This stands wonderfully in the park surrounded by water overlooking the city from the top of a hill.

Somehow the temple suited this quiet park. I seemed to be the only one staring at it. Everyone else was jogging past on this cold morning.

We lunched at the wonderfully splendid 1913 wrought iron indoor market De San Miguel. There you could buy tapas, paella, have wines galore and the sea food was divine. A gem that I did not know about until stumbling across it, although on Sunday it was heaving and Monday we seemed to be the only people there.

Madrid is a city that you can go back to time and time again. There are many things to do and see. Las Ventas bull ring is beautiful to the eye even if you disagree with what practices go on inside. 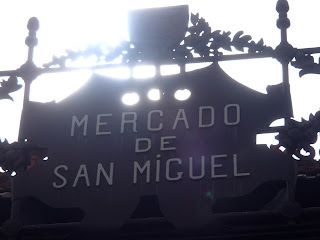 Seeing Plaza Mayor at night when it is less crowded and lit up is a treat as is just walking the streets and seeing where you will find yourself.

I know I will be back again as my friend shows no signs of coming home and to be honest I rather like it there.
Posted by Unknown at 04:05
Email ThisBlogThis!Share to TwitterShare to FacebookShare to Pinterest