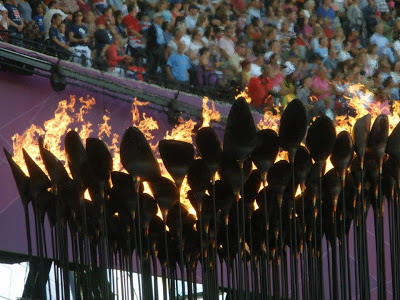 London 2012 made the nation smile together. Stranger chatted on the train and the mood of every one lifted.
I was privileged enough to experience a whole lot of Olympic and Paralympic events. Some for free and others ticketed.

Here were my favorite parts.

From the moment you boarded the central line in Essex you could feel the atmosphere. It was palpable and alive. Dutch fans travelling into town clad in orange sang as they boarded the tube from their campsite and faces were painted and flags unfurled and draped around shoulders.

Normally everyone sits sullenly staring ahead or looking into a paper; not this summer though as everyone spoke openly, freely and excitably to everyone else no matter whom they were or where they came from.
Once off the train it was a carnival atmosphere. All nations were represented and it would not be uncommon to bump into an Olympian or a medallist wandering around. I had the fortune of chatting to the lovely Canadian synchronised swimming team on the tube and also meeting many Olympians and Paralympians in Westfield shopping centre. 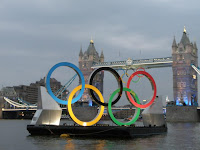 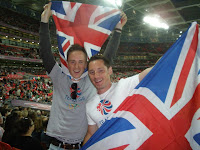 All conversations in pubs, homes and on the streets were about London 2012. London and the UK was plastered in banners and Olympic fever had reached sky high.

This atmosphere kept me coming back and going to see more events. From football at Wembley to Murderball in the basketball arena. I devoured every chance I had for tickets and many of us all went together to soak up this tantalisingly brilliant atmosphere.

Different areas in London became little countries. Near the Golden Hinde became Little Switzerland where I watched the opening ceremony live on a big screen and St. Catherine’s Dock became little Denmark giving out free sausages. Hyde park was Africa village with drumming galore and buildings were dressed up and tarted up for the occasion.

The Olympics torches were also doing tours and I was lucky enough to hold on in Earls Court at the ladies volleyball. I also encountered the Paralympic torch and held that one too. Both made me feel immensely proud.

Watching on the big screens in London created a great atmosphere. The cheering when Super Saturday brought home those gold medals was ecstatic. We gathered at the screen next to Tower Bridge on Potters Field and as they lit up the bridge the crowds were in full song and lapping up every moment. 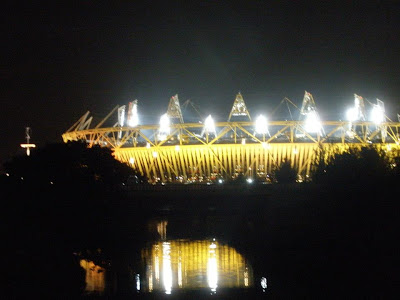 What a park? The Olympic park was beyond all expectations and delivered to such a magnificent high standard that I still look back and smile at the cool times we had in there.

All the naysayers were speaking of doom and gloom and how nothing would work and that it would be a shambles. On the contrary it was amazing and worked like clockwork.

You entered the park and the noise from the pool would hit you as you walked over the bridge towards the impressive Olympic stadium.

The entire area was well built and nicely supplemented with green spaces to chill out on.

Everyone was happy and once your event that you had paid to see was over you could spend all day in the sunshine watching on big screens in the park or wandering round and bumping into famous Paralympians such as Dame Tanni Grey Thompson or England rugby internationals etc.

After one hot day in the stadium I came out very burnt. I was sitting in the direct sunlight at the Paralympics and in my haste had put on my team GB vest. This would leave a very impressive vest tan mark and when I was in the park by the big screens later on the camera men saw this and put it on the big screen to the crowd’s amusement!
Walking through the park in my vest I was stopped by BBC radio Five live and interviewed about my experiences here. I gave a clear and well worded account of how I believed that the Paralympic atmosphere was probably better than the Olympic atmosphere and it was a wonder how the nation could throw away its traditional reserve and party together.

The stadium was lit up at night and created a great scene where people stared in wonder and didn’t want to go home. As you left through Westfield athletes galore were being mobbed for autographs and posing with their medals. Young, old and all colours got on and smiled as the world visited London and saw just how great we can be.

One day a group of us decided to go up to London to watch the triathlon. The event was mostly free and you could line the cycling route and lean up against the barriers and cheer on the athletes.

3 of us decided to dress up in Khaki, pith helmets and full Old Colonial attire. This worked a treat and we had photos taken at every step we made, TV film crews interviewed us and people wanted to pose with us. Swiss TV saw us and the interview that followed was hilarious, we were all in character and going on about the Old Empire games. 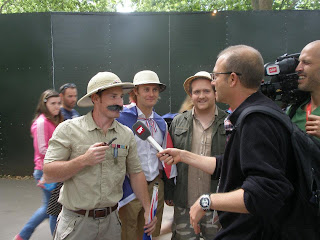 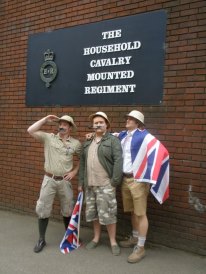 Fancy dress just felt right for the Olympics and on the tube we were the toast of the carriage with people shaking our hands and chatting; not once did we lose character with our plummy accents and moustaches stuck to our top lips. Even when we went for a liquid refreshment we had ‘Empire drinks’ consisting of Gin and Tonics.

Whoever though that cycling could be that exciting and who would ever think that I was sitting only five meters from our future king!

The velodrome was a fantastic place for noise and atmosphere crammed into an arena. More so than the swimming pool that pulsated with energy.

What a beautiful building and the races were so fast, furious and exciting that it makes you want to get back on your bike! 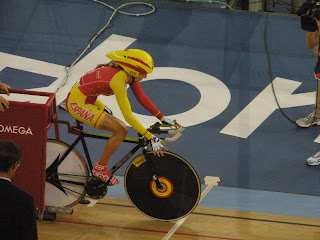 I spend quite a bit of money getting tickets for every event I could get my hands on. I thought it was a once in a lifetime event and that I had to go for it. Together with the ticketed events there were a brilliantly large number of sports on offer for free.

Some events were both ticketed and also free and these pulled in the crowds.

The opening day of the Olympics saw the cycling road races and the crowd gathered on the Mall waiting to see a British win that never came. We climbed trees and saw the cyclists come home so close you could touch them. They flew by in a blur of colour and noise with the crowd cheering them on all the while. Many Bradley Wiggins fancy dress costumes were in the crowd and even though this was the first day of London 2012 proper you could tell it was going to be epic.

Hyde Park hosted so many free events and if you wandered back to the malls you could watch the speed walking. A strange sport that had me captivated and we watched for hours as the Chinese destroyed the rest of the field. 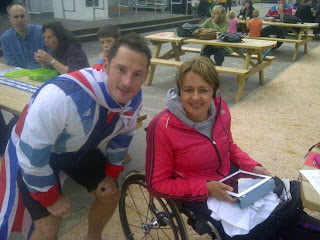 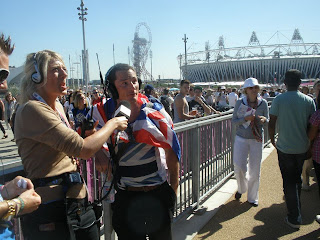 Hyde Park also had London live where you could go inside for free and watch events on a big screen with stalls and show and all sorts going on. Every time Team GB won a medal he crowd went while. Even the security guards and police were dancing.

In my humble opinion the country went even madder for the Paralympics. I saw more Paralympic events than did Olympic events and the television coverage was equally fantastic.

London became the hoe of disability sport and made the world look at disability with different eyes.
Maybe because the country didn’t want the Olympic party to end and jumped on the Paralympics with zeal or maybe because it was just brilliant. You decide? Either way the Paralympics became one massive carnival. 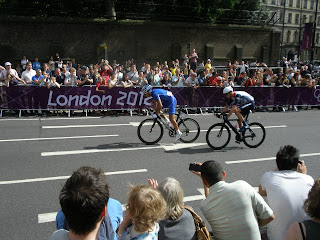 The park was the same just he signs different and it became a famous face spotting competition from MPs to sports stars to actors and TV presenters. They were all there and would wave or shake hands with you if you said hello.

Channel 4 did a brilliant job in covering the Paralympics and one of the loudest cheers I heard at the games was for Claire Balding as she presented the flowers in the stadium to someone.

The stadium atmosphere was incredible and to sit by the large Olympic flame was brilliant. I took so many photos of it and would smile every time it entered my vision.

The park was where it was at during the games, everything would happen here and everything was possible. 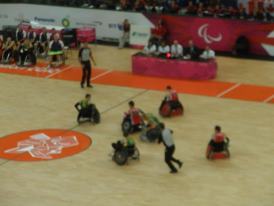 Without doubt the people of the games were the games makers. Clad in purple and always jolly they made the game, they sung shouted and were the best hosts. Always helpful and always up for a laugh.

On the trains people would chat to them and out on the streets people would wave at them. The country would be a better place if we still had them.

London 2012 was the best Summer I had ever spent in this country. I hope to the ends of the Earth that the legacy is not ruined by Government incompetence and greed. The atmosphere created was the creates lift the country has had in a long time and if we could bottle it we would be a nation of smiles. 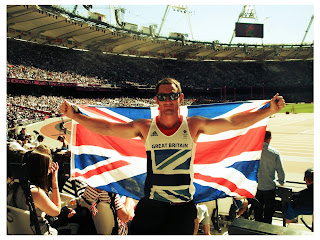 Posted by Unknown at 03:54
Email ThisBlogThis!Share to TwitterShare to FacebookShare to Pinterest