Zanzibar and Pemba is a fantastically rich history. From Omani Sultans to British colonial rule and then Independence and the birth of Tanzania. There is another island however with a hidden past and a surprising population. Ben Whateley-Harris went for a visit. 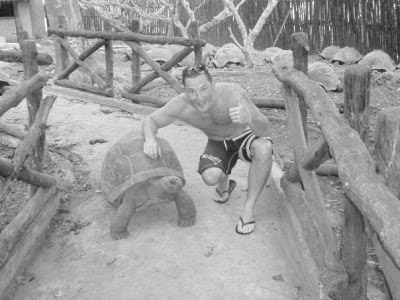 The beautiful facades of Stone Town shimmer in the heat of the day, boats of all shapes and sizes and in varying degree of corrosion gently bob in the waves. The house of wonders (named because it has the first working elevator in Africa) stands tall overlooking the beautiful postcard sea.

I sit on an open topped wooden boat with a long tail outboard motor, we bob up and down in the harbour and await the off.

The boat owner pulls up a crudely welded anchor on a frayed rope and guns the engine.

The noise startles a few birds who had settled at the far end of the deck; sending them off into the sky.
We set off on the 5kilometer journey in the bay lurching up and town as we crest the small waves, heading towards an island that lay directly ahead of us.

I sit in the sun, top off catching the rays as the repetitive movements of the boat relax me. Gazing across the bright sea I spot an old jetty long crumbled into the sea and new buildings on the shore line.

In front of us is Changuu Island.

Know by other names, such as prison Island and Quarantine Island. The small 800 meter long and 230 miles island looks like a small tropical paradise.

Changuu Island was turned into a prison by the British in the 1890s but never housed a single prisoner. Instead the prison became a prison by a different name. A quarantine station for those suffering with yellow fever.

Ships would dock at the once standing jetty and there they would deposit the sick to stop the spread of any illnesses reaching the main island of Zanzibar.

Of course not all ships stopped here and disease was rife in those days before medical advancement.

We stop a little way off the coast and the captain suggests a swim. Suddenly he is out of the boat and in the sea. I follow suit and dive into the clear waters to relieve the heat of the day.

Our boat then comes closer to the shoreline and drops the anchor. I jump out and land up to my knees in the water, grab by bag and head for the shore.

My feet reach dry sand and I drop my bag to take in the view. Behind me across the sea I can see the majestic old frontage of the buildings of Stone Town and in front of me are dense trees and a sandy path. I set off up the path.

Changuu Island gets its name from a local fish, although I never did find out what one looked like or tasted like even.

The sandy path was soft under foot and therefore I didn’t need to wear my flip flops. After a matter of moments as the island is so small I reached a clearing.

A large courtyard awaited me with a Georgian building standing in the sun. Spots of paint peeling off from time and heat.

Bars were on the windows from the construction as a prison that never caged anyone.

This was the prison building that became the quarantine hospital where people were supposed to be monitored for up to two weeks. A large door let to an internal courtyard dotted with large pot pants dotted around and an old man in a straw hat sweeping the floor with a palm leaf.

The island remained a quarantine station for a few years but was mostly used as a leisure complex where they used large coal pits as swimming pools and build a chalet to house the tourists. Rainwater was the only source of fresh water in the island so it was never very crowded.

This however is not the reason I had come to Changuu. There was a resident or I should say residents that I wanted to see. Some older than I will ever be and all of them not the best conversationalists.

Changuu Island is home to a thriving group of giant tortoises who first came here in 1919 from Aldabra in the Seychelles as a gift from the British Governor.

The tortoise population which is now deemed vulnerable in the wild grew in the 1950s to a massive 200. But poachers, thieves and opportunists who wanted to sell the shells decimated their numbers until only 6 remained. 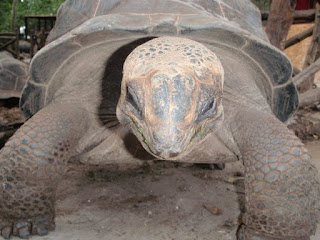 Efforts have been made and they are now on the rise again and protected.

This was the reason I had come to Changuu. I wanted to see these slow moving giants lumbering along with their old man faces and craning necks.

I walked the path in the shade of the tree canopy and reached a small gate. A little shack was assembled and a guard/keeper stood selling tickets for a minimal entry fee. There was a donations box so I shoved by change from the entry ticket into the slot and entered.

Walls have been built to contain an area where the tortoises can roam and not escape. A pathway had been constructed to assist you on your visit and not wander off into the under growth.

I crossed the thresh hold closing the gate behind me and was greeted by a wonderful sight. Tortoises of really huge proportions stood slowing chewing looking at you, or rather through you.

Some slowly plodded along and every so often you would hear a scrape of a shell as he or she climbed over a small boulder.

These beasts were massive and it made me long for a trip to the Galapagos Islands.

Collecting a bunch of leaves I approached a rather wet eyed and wrinkly specimen. He wasn’t the biggest by far but he seemed to be the most active. I offered up the leaves and he craned his neck towards me. I lifted the leaves higher and he went up onto almost tip toes reaching for it. Then with one chop had the lot.

Another tortoise saw I had some leaves and with remarkable stealth had come up behind me and grabbed a mouth full to my surprise. After that I kept my fingers well away from their mouths.

Many lay motionless while others seemed to be dozing. A few were quite active and all descended on me and my handful of leaves.

As some chewed away you could touch them. I felt the shell, the rock hard and smooth protection they have. I stroked the neck and the skin moves over the flesh easily with all the wrinkles and is a rather nice feeling.
They didn’t seem to mind and in fact some looked like they were enjoying a nice neck rub. Craning their neck out as far as it would go and closing their eyes as you strokes them.

It was lovely to be here with these animals which can live as long as 150 years. Here waw a true dinosaur, an animal that has been here before us where we can be his friend or worst nightmare.

I do hope the Tanzanian government keeps funding this place as these majestic beasts deserve our help and love.
They have a deep look in their eyes, a look that seems to peer into your soul and befriend you. A look I could not ignore and a look that made me a tortoise fan for life.

It was time to leave and return to the bobbing boat and the Stone Town harbour. Just as I was walking down the sandy path still barefoot Changuu had one last surprise for me.

I heard a rustle in the bushes to my left and looked silently without moving for where it may have come from.
There skittishly looking back at me was the smallest of the African antelope, the notoriously shy Dik-Dik. Slender and brown with large eyes and lashes we made eye contact for a moment.

Then she sprang into life and in a flash was gone.

My one and only sighting of this enchanting little animal.

The boat gunned the engine and Stone Town grew in size. Soon we were amongst the moored hulks of old rusting cargo ships. Names on the stern said places such as Monrovia, and Montevideo. 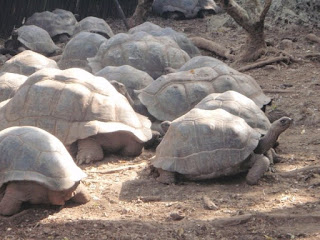 My feet touched dry sand again and I looked back across the sea to Changuu.

I wondered if a tortoise was looking in this direction?

Posted by Unknown at 02:55
Email ThisBlogThis!Share to TwitterShare to FacebookShare to Pinterest