Deserts; why do I keep going back? 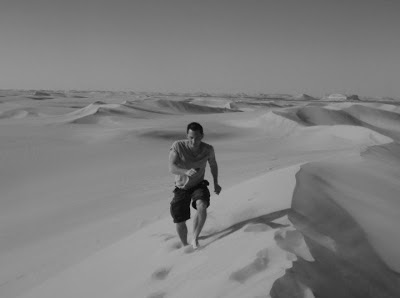 At the back of every issue of the fantastic travel magazine Wanderlust there is always a section where they ask three people what they are. Are they a desert, mountain or jungle person?

There is something pure, clean and simple about a Desert.

The sands sometimes squeak beneath your feet and for as far as your eyes can see the desert around you resembles a sea of sand dunes constantly being shaped by the winds.

I have been fortunate to see some of the World's great deserts.

The Sahara, the Kalahari, the Namib, the White Desert and of course the Great Sandy Desert in Australia.

﻿﻿ There are many more that I would love to see.


Each one is different and they all have their uniqueness. From the Gobi in Mongolia to the Patagonian desert and the Antarctic desert.

I have stood in the blazing sun eyes shaded behind sunglasses with the wind battering my face and grains of sand stinging my legs.


﻿
I have climbed up to the tops of large dunes and peered through binoculars and see the heat haze. Seen what constitutes a mirage and looked in wonder at the people who inhabit these inhospitable environments.


Deserts are places of such beauty and death. They can destroy you if you are not careful but also make the world seem simpler when you stand alone in one with nothing but the noise of the wind.

One such pleasure is slogging up a large dune. Every step you make forward the sand seems to collapse under you and send you back further.


You pump your arms and legs and run as fast as you can and make miniscule progress.


Finally puffing, panting and sweaty you arrive at the crest of a dune and pop on your ipod.


Some songs really suit this landscape and you can be lost in the moment. Time seems irrelevant and at this point in time you are alone with nature and the blazing sun.

Of course some deserts are not sand. Barren, inhospitable areas where nothing or very little grows. Ice and stone for example.

The deserts I have seen have been majestic, beautiful, harsh and mesmerising.


Standing in the Tunisian Sahara gazing out at a rippling mirage that resembles water but in truth is a lie.
In Namibia and the red sands of the Namib I came face to face with Dune 45. Not the best of names but this gigantic mountain of sand was irresistible to not climb and when you run down it feet sinking deep into the slopes you feel safe and can jump and land with little impact on the knees.
The red sands in the early evening sun were dramatic and made my trip up this Southern African country en route to Swakopmund.
The more I see of deserts the more I want to explore. Either on the rhythmic movements of a camel; by quad bike; or by a battered old Toyota landcruiser which seems to be the favourite and most easily found source of desert transportation.
Riding along, driving through dunes, over crests and down at ridiculous angles is a great feeling.
Gripping the handrails as your local driver navigates routes that are blind to your un-desert trained eye.
I urge everyone to sample a desert, believe me you will soon become hooked.

Posted by Unknown at 14:46
Email ThisBlogThis!Share to TwitterShare to FacebookShare to Pinterest