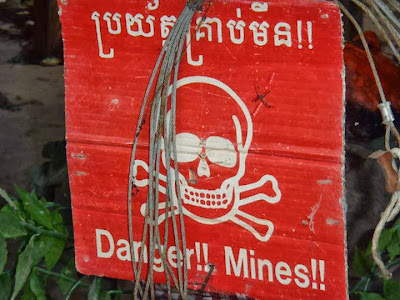 The cool breeze rushed against my face and dried my mouth as I smiled. I sat back, relaxed and watched as the world went by. Small villages, buses full of school kids and tractors pulling gigantic loads.


Here I was in Cambodia travelling along a country road in a tuk tuk about an hour outside Siem Reap. The further we get from the city I start to notice red signs by the side of the road.

In Cambodia these red signs mean more danger than the usual road sign you will find in other corners of the globe.


These signs are embellished with a large white skull and cross bones and the words 'Danger Mines'.


Cambodia after years of genocide under the Khmer Rouge and the subsequent invasion by Vietnam unfortunately suffers from a terrible affliction to its countryside.


Namely that many parts of the country are riddled with landmines. Some areas have been cleared but the more rural lands are still a danger zone.


I was in a tuk tuk that I had hired to head to the Baphuon temple and the River of a thousand lingas (Kbal Speen) north of Siem Reap. While the tuk tuk chugged along belching smoke from behind and screaming as we went up inclines I knew where our next stop would be. 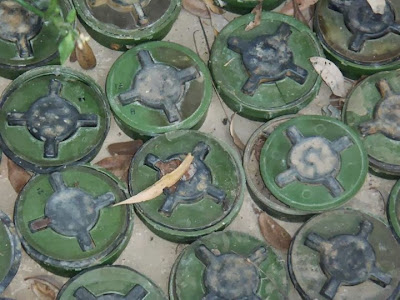 I had read about a landmine museum in a travelogue by a famous comedian and again in an old newspaper. This was not just any old museum by the side of the road. This museum was the home and work place of a man known by the name Aki Ra who dedicates his life to digging up and disarming landmines.


A noble thing to do. But what makes this man's story so more intriguing is that he laid many of them in the first place.

Aki Ra believes he was born in 1973. His family were killed by the Khmer Rouge while they ruled Cambodia and tried to bring the country back to what they called year one.


The Khmer Rouge ruled Cambodia from 1975 to 79 ad in that time it is estimated that over 3 million people were killed.


I have been to the killing fields and seen the skulls in the stupa and seen the bones coming up to the surface after the rains. Cambodia has a dark history and one she is opening up about.


At the age of ten after living with a woman who had looked after him and other orphans Aki Ra was forced into the Khmer army and given a gun. He thus became a child soldier. 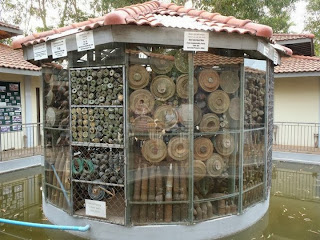 Imagine a ten year old with a rifle. I cannot picture it in my head but in countless countries children are still being forced to throw away their innocence and take up arms.

Forced to lay landmines he became quite good at it.


At the museum there is his story on a large board telling how he used to sleep in the forests surrounded by landmines that he had laid. He could only fall asleep when he felt safe by laying them to protect him from intruders while he dozed.


Finally after invasion and more military service in the Vietnamese army he left and became a civilian once more. Missing out on the majority of his childhood in the process.


He received UN training in landmine clearing and decided that he could clear the areas where he laid mines himself. Although he says that he has laid literally thousands of them.


He was armed with only a penknife and a stick and would sell de-fused mines to fund his work.


Later the old shell casings and mines would litter his house and people heard about him. They used to travel to his house and pay a dollar (the default currency of Cambodia) to see them. 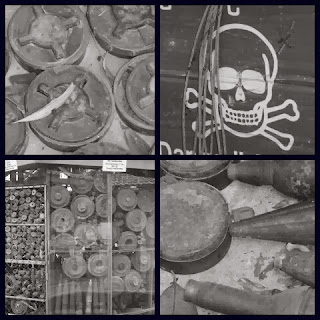 That is how the landmine museum began.

Today the museum has a small dusty car park and you buy your ticket from a little old woman inside a large aviation fuel casing made into a ticket booth.


Once in you wander, look, read and see the thousands of shell casings that lay rusting on the ground or in display cases.


These things of horror, death and destruction litter the place inside and out.
It beggars belief how many of these evil things are still out there in the wilds waiting for an unsuspecting child’s foot to activate it.

I stood looking at the paintings on the walls which were quite graphic about what landmines can do to you. For children and others who cannot read art works where people had lost arms and legs are quite a strong message and warning.
Unfortunately Aki Ra was not there today as I walked through the courtyard with its centre piece of a greenhouse full to the brim of land mines.
It may be just me but there was an eerie silence over this place. Not as eerie as the Killing Fields or Sual Sleng prison in Phnom Penh where  the birds literally stop singing and the sounds of everyday life do not penetrate these places of death and suffering.
It seemed as if time was standing still as I gazed lost in thought at small pieces of metal that once buried in the ground can lie in waiting to pounce.
It does not discriminate; a land mine will kill anyone or thing that steps on it. Man, woman or child and even livestock.
I was the only one in this museum and even though I had the place all to myself I felt odd and uneasy looking at the display case of false limbs given to survivors of landmine blasts.
Imagine if it was me I kept thinking over and over.
The sun had gone behind a cloud and the place grew dull. The heat was still sticky and wet but there was not breeze anymore.
I walked outside and lent on a railing looking down at a pile of hand grenades rusting in the tropical heat.
I am not sure how long I stayed reading signs and leaflets. Time seemed to have no meaning. I was en route back to Siem Reap after seeing some beautiful temples and now this had taken the wind out of my sails. I felt a little low that such a beautiful country can still cause so much pain.
Pain hidden in the dirt and the land.
It was time to leave as my tuk tuk driver was beeping me and wanted to get back to the bustling streets and pick up some more tourists dollars.
Leaving a donation in the box I clambered back in to the tuk tuk and we sped away.
The cool refreshing breeze livened me up a little and soon I was ready for more temples tomorrow and a few pints of Angkor beer in Pub Street tonight. 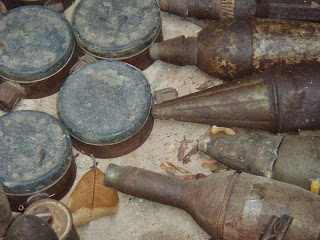 But lingering in my mind is what I had seen today and the wonderful work of Aki Ra.
He is facing his demons head on and I wish I could have met him to shake his hand.


Posted by Unknown at 15:32
Email ThisBlogThis!Share to TwitterShare to FacebookShare to Pinterest