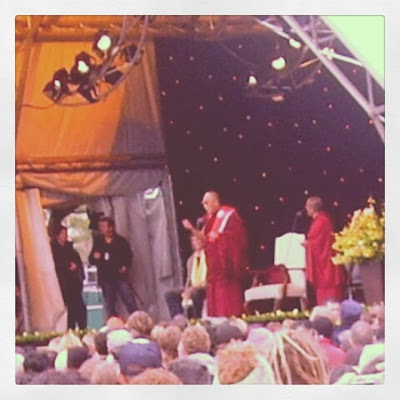 One day back in 2007 I groggily stepped off a night bus from Melbourne to Sydney and came across something that I will never forget.


I had inadvertently stumbled into this bustling city on the very day that His Holiness the 14th Dalai Lama was due to give an open air speech.


This was an opportunity too good to miss and one I needed to go and see.
After depositing my bags off at a hostel I headed off to find out where this was all taking place.


Looking back I remember it being a cold, overcast day with ominous clouds in the sky.


I had left Melbourne the night before and caught the Greyhound bus leaving the rain and storm clouds of Melbourne behind.
Sleeping on buses can sometimes be a hard thing. This bus journey in particular which had stopped off at the capital city Canberra I remember being incredibly long and tedious.
Just as I would drift off I would jerk awake or find that the guy next to me was snoozing on my shoulder and snoring.
The rhythmic movements can send you to sleep however; but never when you want. When I am reading I will fall asleep but not when I want to at 3am as we stop at a backwater cafe for a toilet stop. 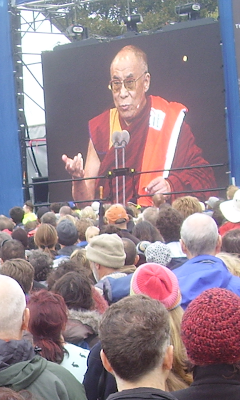 This was the final day of his Open arms, embracing kindness tour of Australia.

Here I was at the Domain in Sydney surrounded by people all staring in anticipation at the stage.


All eyes were glued for his Holiness the Dalai Lama’s arrival.

He had been to Australia before and I believe this was his fifth visit. He had met with the then Prime Minister John Howard and by doing so China was kicking up a stink as they always do.


The Dalai Lama is someone I great admire and I would love to go to Lhasa in Tibet to see where he lived and fled in Exile from.


At the time he was 71 years old and still displayed boyish charm and humour as he continues to do today.

The weather became worse and it started to drizzle. I pulled my coat tighter around me and put my hood up. I stood with a girl I had met on the bus and both of us stared at the stage.


All of a sudden something happened. A local celebrity of some kind came out onto stage and welcomed to rapturous applause his Holiness himself.


There was people craning their necks to get a better view and people on tiptoes to see this man who to some is a living God.


The Dalai Lama came out onto the stage in his golden and red robes. The light breeze kept them constantly moving and occasionally he adjusted them to cover an arm that must have been getting cold.


There were some speeches from local dignitaries and then they presented his holiness with an AFL Aussie rules shirt of some local team who play in red and white.


The Dalai Lama draped it around his neck like a scarf and then went about answering questions that had been sent in.

He would laugh and giggle and tell stories. One story he told was how his hotel was near a night club and when he got up to meditate all he could hear was the thumping beat of the music and did quite a good impression of it.


His laughing was infectious and the adoring crowd all had smiles on their faces.


Questions were asked and he answered honestly, candidly and always poetically.


Then came a question that made him giggle.


A lady had written in and asked for the meaning of life.


The Dalai Lama laughed and said that was something he could not answer. He did say that, love, fun, family, peace and respect were keys to life. This answer received a huge ovation from the now dripping audience who had not budged at all since he started to speak.

I stood staring at the stage listening intently to his advice and words. The rain started to run down my neck but I didn’t care. I was lost in this man’s presence and it looked like everyone else there was also lost deep in thought.
There were people from every walk of life here at the Domain. People in suits using newspapers as make shift umbrellas. Nurses, police officers, students and families with young children being gently rocked in their arms. They were all there soaking up the energy coming from the stage.
The crowd was mostly silent apart from hits of giggling and spontaneous applause.
They were as in awe as I was and some people had tears in their eyes and gently dabbed at them with a handkerchief.
He spoke for a long time and no one wanted it to end. His words filled us like wine pouring into a class and I wish I could remember all that he said. Instead only snippets come back and the memory of the rain.
I feel privileged to have seen him from a far. I was lucky to have been in the right place at the right time and in the right continent far from home.
Not many people I know can say they have seen the 14th Dalai Lama speak. I am happy to say that I can boast that fact and the memory of being in the presence of such a great Nobel prize winning  man will live with me forever.


Posted by Unknown at 15:18
Email ThisBlogThis!Share to TwitterShare to FacebookShare to Pinterest