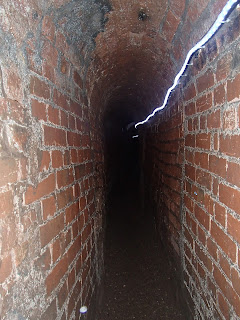 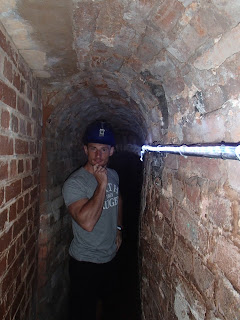 Underneath the stylist modern city of Exeter lurks a dark, dank hidden world. A world where medieval workmen slaved to bring fresh water to the people of the city. A world where many sheltered during the blitz and a world that has mostly been lost after the extensive bombings of the Second World War and the Baedeker raids.

Exeter along with other cathedral cities such as Bath and York was targeted during the war as a reprisals raid. The allies had bombed the wooden city of Lurbeck and the damage was tremendous as th fires raged through the wooden buildings.

Therefore revenge attacks on British cities were organsied and Exeter took the brunt of one such raid in 1942.

Many of the cities historic buildings were lost forever as the bombs fell.

While the bombs reverberated around smashing buildings to rubble above ground, below ground many people sheltered in the medieval tunnels that crisscrossed the city.

Built during the medieval times by cathedral masons the tunnels housed pipes that brought drinking water into the city from surrounding springs. This was the only source of freshwater in those days and the lead pipes were at the time unknown to carry health implications.

Many of the tunnels collapsed during the air raids and are now lost, deep underground and full of rubble, dirt and bricks.

However you can still visit a part which is open and lit and in fact is the only one of its kind in Britain.

On a muggy day four of us decided to do such a visit and we were shocked that to enter a medieval underworld you descended through a modern glass fronted building and down a flight of stairs.

Hard hats on and we were now below John Lewis and a chocolate shop. But all was silent apart from a  faint drip drip in the distance.
The walls were cool and damp to touch and smelt of wet human on a train after a heavy rain fall.

You could not go too far and in fact probably walked, crawled and stooped for only 300 yards. All the while bumping your hard hat on the roof of the vaulted brick tunnels.

At one point you could hear the rumble of traffic above and the occasional bang of a loose man hole cover where a car wheel hit it just right. Apart from that all was quiet and it was rather chilled to be in such a calm atmosphere under the hustle of a major city.

Sadly we were underground for only half an hour and after a potted history video on loop it was time to emerge into the bright lights of Exeter.

I would thoroughly recommend this little excursion if you are in Exeter and need half an hour of escapism. Also you must do the narrow parts that the girls opted out of for fear of getting 'dirty'.

Exeter itself has loads more to offer. A trip around the Cathedral (at time of writing was undergoing renovations that ruin a lot of pictures). Walk down to the quay and look through the antiques shops and cross the water by chain boat for 30 pence an adult.

Or simply walk around and see where the last women in England were executed for witchcraft.
All in all it is a lovely city. They don't have a half bad rugby team either!


Posted by Unknown at 12:59
Email ThisBlogThis!Share to TwitterShare to FacebookShare to Pinterest