I am a world champion! 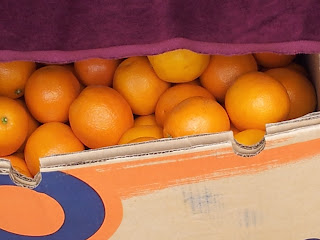 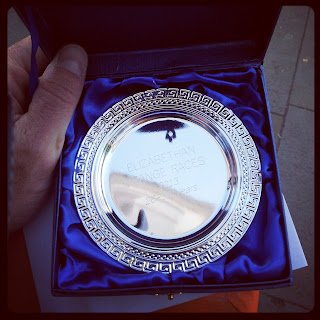 I have always dreamed of being a world champion.

Being the only person on the entire Earth that can boast one such accolade.

Never did I think that it may happen; and happen it did.

Every August the Devon town of Totnes holds a unique one off event. a de-facto world championship as it is the only one of its kind.

Namely the Totnes Orange races. This race dates back 500 years to the time of Sir Francis Drake.

Legend has it that one of Drake's crewmen dropped a box of oranges and as the rolled down the sloped high street the Elizabethan towns folk chased them.

One look at the high street and you suddenly realise just how steep it is. You have to navigate a bend, an archway, potholes, manhole covers and cubs en route to the finish line.

The course is 850 meters for adults and you can pick up quite a speed on the way down. It does become a full blown sprint.

The rules are simple. You start up by the market square and when the whistle sounds throw, roll or kick your orange as far as you ca and then run after it.

Once catching it up you either kick, roll or throw it again and keep it under control until you reach the finish line. You cannot pick it up and run with it and you have to be in control of it when you cross the finish line.

The town was awash with bunting and the sun was high and hot. Totnes is a historic town boating a castle, river, island and beautiful architecture and today it was full to the brim with people. Many of which were in full Elizabethan attire complete with ruffs around their necks.

The children's races started first and there were a few of them. They do a simpler, smaller and flat course.
The the real action starts the 17-26 age group raced the full length and was won by a local who had done it the previous year and knew how to control his orange.

Finally the time came for my race. The 26-39 age category.

There were quite a few of us; mostly non locals and we all jostled on the start line while the health and safety notice was read out.

A lady i full Tudor get up sounded and whistle and we were off.

I chucked my orange into the air down the road as the others rolled it and that way could get up to full speed as I passed them trying to kick it.
I caught it up and collected it and rolled it with full force down the road.

Ii was now in a four person race and shoulders began to bump against each other and as to whose orange was whose became a blur.

The course became steeper and my pace quickened. My legs pounded the street and I ran as fast as they would allow me to travel.

My arms umped and my cheeks pushed out the exhaled air.

Somehow after an orange smash up I was in front and the finish line was only 100 or so meters ahead.
I caught my orange and rolled it was fast as I could while I caught a second wind and pumped my arms and legs to propel me onward to victory.

Somehow I crossed the line first and was greeted by cheers from the gathering locals.

A man in Tudor smock gave me a sign sating '1' on it and they took my name and where I was from.

After my race I had to hang around and watched the over 40s race and then the 3 doddery old biddie in the over 60s race. Finally the police race was utter tosh as they were so unfit that they could not complete the course and had to stop for a breather and walked the rest of the way. So much for Her Majesty's constabularies fitness!

The presentations were made and I was called out and presented with a silver engraved ashtray/plate by the mayor. Sadly there was such a bundle of bodies that the only photo of me has peoples shoulders and heads in it.

Then that was it. No fanfare, no lap of honour, nothing.

I was a world champion in my age group for a bizarre minority once a year event in a small Devon town.

The smile was huge on my face and I felt great; this was definitely something silly to tell the grand kids.

Sadly I do not think I will be back to defend my title; but who knows. Life is a funny old thing! 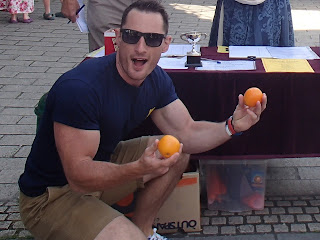 Posted by Unknown at 08:21
Email ThisBlogThis!Share to TwitterShare to FacebookShare to Pinterest