A little jaunt to Bath

Historic Bath.
Home to the Royal crescent and the world famous circus.
Beautiful Georgian architecture fills the city and it boats some wonderful drinking establishments that you can wander into from quaint alleys and cobbled streets.
Bath is possibly on eof the prettiest cities you will ever encounter.
The river flows alongside the Recreation ground. The home of Bath rugby club; where they take down one temporary stand each pre-season that enables the local cricket team to play and the locals to wander on the pitch.
This is where I found myself one very raining Saturday in August.
The rain pelted us drenching us through our jackets and making our jeans soggy. Later in a pub we would literally steam from the heat of the cosy bar.
I was standing drink in hand on the grass of the rec watching Bath demolish Bristol in a pre-season friendly and highly anticipated sold out local derby.
We stood next to the bar and watched as try after try was bulldozed in with Bristol offering little defence.
We asked a well-dressed man to take our group photo and low and behold he said he was the chief executive of the club. I didn’t really believe him until I saw him up in the gantry with the TV cameras chatting away. Access all; therefore I googled him and low and behold he was who he said he was.
I went to the bar and came out not only holding pints in a cardboard drinks holder but the match ball.
It has been kicked into touch and landed in my arms. When I wandered out everyone laughed at how I had caught it with the drinks and not split them.
With the match over and the rain coming down even heavier it was time to explore through drinking establishments. 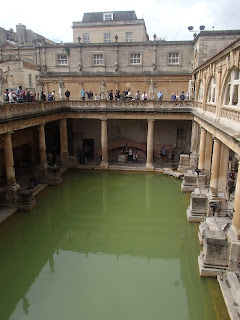 We sampled the delights of the pig and fiddle which I highly recommend, the Saracens head; and a large pub right on Pultenay Bridge where you go underneath to follow the Avon path to the rugby club and many others.
All were fantastic except the Irish bar Molloys where the serving staff were so slow and useless that I wanted to throttle them. Never have I seen a barmaid who had no idea how to pull a pint or serve a mixer! It was painful!
The night became darker and the drinks flowed. Soon it was silly o’clock in the morning and we caught a cab back to the university where we were staying.
Bath uni becomes a giant Travelodge style hotel that offers an on campus breakfast and a good bar for very reasonable prices.
The next day the rains had abated and the sun shone. The day was hot and the shorts were out.
Today was dedicated to exploring and seeing the beautiful sights of Bath.
I have been to this UNESCO world heritage city before many times. But every time I come I have to see more and sample things over again.
The Royal Crescent in the sun looks terrific, resplendent and majestic.
It was designed and built between 1767 and 1774 by the architect John Wood the Younger. It was Grade I listed and is possibly the finest example of Georgian architecture in the UK,
The Circus which you access down Gay Street enchants you with terrific Georgian architecture and the Roman Baths offer a glimpse into the past.
The Roman Baths in my opinion are a little on the steep side price wise. BUt you cannot come all this way and not sample the waters in the reastaurant and discuss the taste.
The Baths are now more interactive with video displays, audio guides and actors in costume wandering around. We were lucky and went in early as when we came out the queue went around the building and past the cathedral. 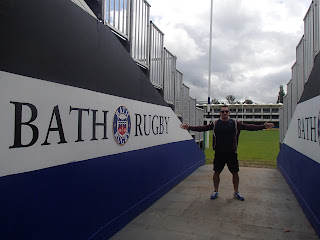 The cathedral towers down on you and I always find myself staring at the wooden carved door for ages. Taking in the embellishment and wooden wonderment for an age.
Walking along three Avon eating an ice cream or taking a stroll down onto the pitch and walking through the tunnel at Bath rugby club.
To be honest you can walk all through Bath and see so much.
Antique maps shops, arcades, parks, gardens, statues and sculptures. They are all there. There is also not a high number of annoying street performers or human statues.
The sun dropped below the horizon and the city glowed in the evening light. We must move on and leave these treasures behind for another day. 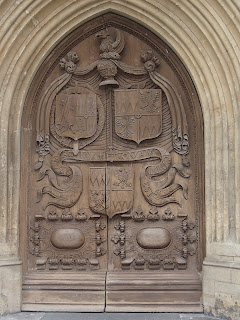 I know I will come back. Especially to watch the rugby.
Sadly our time in Bath came to an end and we hit the road.
Next stop we would be travelling back in time even further than the Romans of the baths! 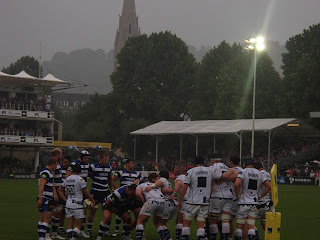 Posted by Unknown at 16:00
Email ThisBlogThis!Share to TwitterShare to FacebookShare to Pinterest