The traffic home from work was almost non-existent and somehow I whizzed home in a matter of minutes unlike my usual slog in the car.
I parked up and wandered to my front door shuffling my keys in my hand. 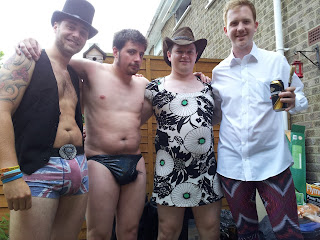 Opening the door and heaving my bags over the freehold everything seemed normal.
Well everything was normal until I looked up and there was my mate Dave in a dress on my stairs.
To be honest I thought 'he is just being silly' as he and his wife and kids were coming round for a BBQ that night anyway and they have a key to my house.
I said my hellos to everyone and  the kids attacked me; then the doorbell went.
Wandering out of the kitchen my friend Jason had arrived. I was a little confused but thought he was just randomly popping over until I noticed that another friend Jeddy had snuck in too and was wearing a cowboy hat and pink leggings.

Jason disappeared upstairs as he said he was getting changed I started to think I was missing out on something.
Now this was very odd and I looked around for some sort of massive surprise.
Taking the stairs I opened the door to see Jason putting on a costume from an electric six video and then I got the shock of my life.
For behind the door dressed in nothing but a thong was my mate Wings who had been telling me all along that he was not back from Spain until the following day.
I let out a yelp of shock and was stunned. 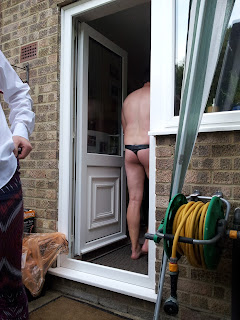 'You came home early and ruined it', Dave exclaimed.
He then told me how they were going to try and get my sofa in the garden and do a dance routine for when I got home.

This made my day and I am sure the neighbours saw all this man flesh and fancy dress through the trellis fence and must have wondered who their relatively new neighbour actually was. Was he a member of some crazed fancy dress sex club that randomly had kids in the garden splashing their feet in a paddling pool!

There was nothing for it. I donned some Arabic attire to blend in and joined in the drinking. 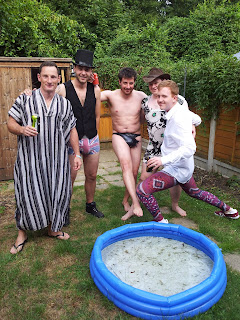 Friends are the best thing in the world; especially when they are full of surprises. 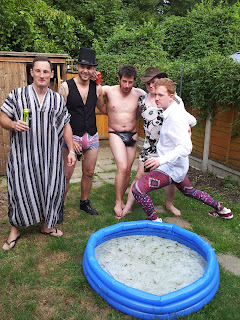 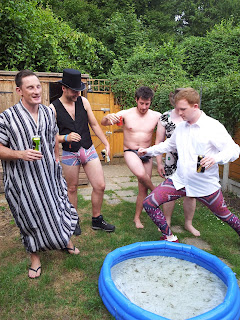 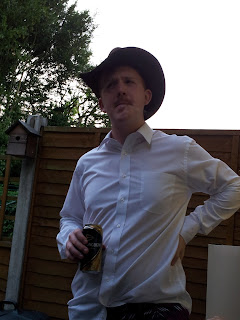 Posted by Unknown at 07:37
Email ThisBlogThis!Share to TwitterShare to FacebookShare to Pinterest