What have the Romans ever done for us?

My Life of Brian Trip 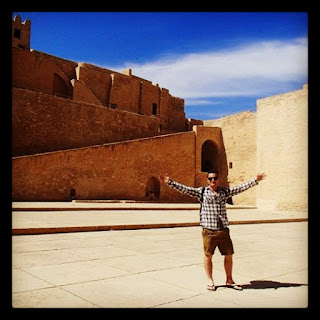 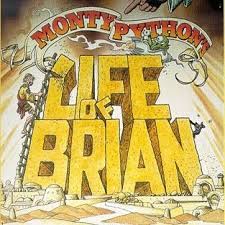 Monty Python's Life of Brian to me is the greatest comedy film of all time. I could watch it over and over again a thousand times and still laugh at the jokes, situations and brilliant physical humour.

Therefore it was too good an opportunity to miss when I got the chance to visit two ancient places where the film was shot.

Built as a defensive fort to scan the sea looking for invading Byzantines by Harthama ben Ayan in 796. The ribat has been added too over time growing in size and shape; and in the 12th century the Kasbah was added.

Monty Python were not the only ones to film here. Franco Zefirelli filmed Jesus of Nazareth here too.

I was interested in the Monty Python film though and when I walked through the side entrance to the ribat I looked up and could see the tower where Brian fell out of while being chased by the Romans and landed in a passing spaceship. Only to be later called ‘You lucky bastard’! Watch the clip here.

Outside the gates cars honk their horns and you walk through the tourist area where sellers try and harangue and persuade you to enter their shops. They offer titbits such as ‘best prices in town’, ‘no hassle, just looking’ and my personal favourite ‘I have nice things for you sir, lady, madam, mister’.

Once inside the ribat the sounds of the outside world disappear and you are surrounded by silence.
I stared at the tall wall and all I could imagine was red letters giant letter painted high up and all over saying ‘Romans go home’. Just like the film.

Luckily we were the only ones there which added to the experience and enabled us to wander freely in peace and explore every nook and cranny.

There were a few boards in several languages about the building work and the excavations that have taken place. Every so often in a shaded spot you would also find a small potted history mounted on the wall.

The ribat has many rooms and rooms that offshoot from other rooms. It was a silent dusty maze of hidden tunnels and passage ways.

Outside in the blazing sun stairways without handrails that made my stomach churn when I climbed them and looked down were too irresistible to not climb.

I clambered up the stairs and the view over the city and the sea was impressive but not as impressive as the beach front where an old man beer gut and all lounged in bright orange speedos. What a sight to witness while inside an ancient monument.

Wondering the battlements I reached the tower and of course ascended to the very top where a giant Tunisian flag fluttered in the welcome breeze. Unfortunately the stairwell even though it looked clean stunk of urine and made you dash up holding your breath. 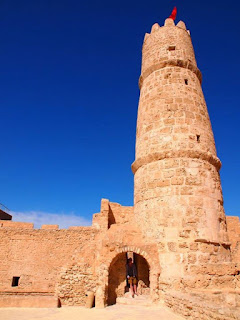 At the top I could see far out over the Islamic cemetery all the way to the ex-president Habib Bouguiba’s mausoleum. I could also see orange speedo man now wandering the beach looking for prey most probably.

Next stop was El Djem. One of the most impressive and best reserved Roman amphitheatres in the world.
But before that there was one last Pythonesque moment when a northern transsexual boarded out train carriage and spoke with a deep voice and scratched her/his stubble and received many stares from the bemused locals on the metro. 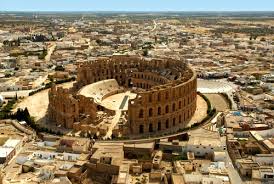 El Djem took my breath away. It is truly magnificent standing there looking out over the town in the blazing sun. A large looming presence that dominates the landscape and had such a majesty and beauty about it that I can see why Monty Python filmed here and why tourists flock through her gates.

Smaller than the coliseum in Rome but much better preserved (mostly because of the lack of earth movements) and most importantly it has more access to the visitor.

You enter through the main gate and can either walk out into the open air centre where a small stage was being erected for a local concert that night or you can climb the stairs and wander and explore.

This is what I did and it was the best decision I made. 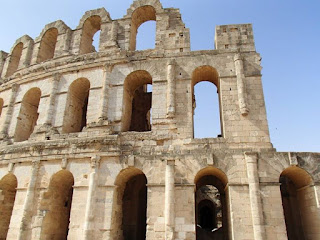 Three ancient flights of stairs later and I was all alone with my footsteps echoing down the corridor bouncing back off the stone archways above me.

As with most developing nations there is a distinct lack of health and safety and therefore not many barriers or railings.

I have to admit I was a little bit of a naughty boy as I climbed over a railing and wandered quite perilously close to the edge and out onto the crumbling ledge.

It made for a great photos.

I looked down and was relieved that I had gone up rather than straight into the open air part as now the place was teeming with tourist. Most of which were Russians and many were dressed the same. Old ladies wearing entire matching outfits including shoes and looking like an ancient Cheeky girl tribute band wandered around posing in strange positions for the camera.

Luckily I was up high and away from them all.

After a few photos and another naughty trail clambering moment I wandered down into the sunlight.
This in the film is where Brian meets the Judean People’s front and confuses them for the People’s front of Judea. He is told to ‘Fuck off’ in one of the films funniest lines.

Of course I re-enacted the scene and was filmed doing that line unfortunately it didn’t come out right. But here is the original. People's Front of Judea

Everywhere I went in El Djem and Monastir scene from the film came flooding back to me. I could hear the words from the films and famous lines. My head was full of jokes and a smile crept across my face and I openly laughed out loud at some of the thoughts I had.

The only thing that slightly disappointed me though was the complete lack of recognition at both sites for the film. Nothing was mentioned and when I later spoke to some English tourists they both had no idea that the film was shot there.

To me however; it was a comedy pilgrimage and one worth every dinari. “Spare a dinari for an ex lepper”! 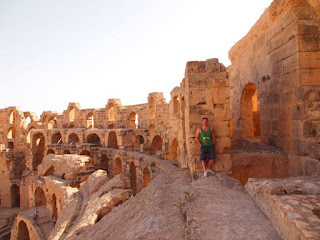 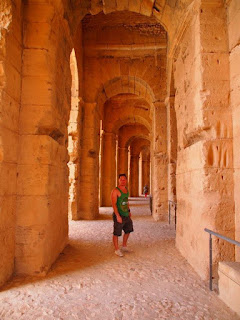 Posted by Unknown at 14:28
Email ThisBlogThis!Share to TwitterShare to FacebookShare to Pinterest