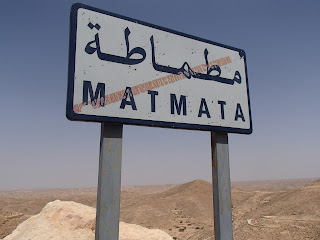 Keeping your house at a constant temperature so it is cool in Summer and cozy in Winters.

Imagine being called a troglodyte by people who visit by the bus lead.

This is the strange yet appealing story of the Berbers who have made Matmata their home.

Matmata in Southern Tunisia is famous for the house where Luke Skywalker grew up with his Uncle Lars.

George Lucas used a local cave dwelling in the first Star Wars film and it certainly has an otherworldly feel about it.

After 4 hours rattling along roads in a bus watching the landscape change from urban to barren to rocky we finally arrived.

Matmata is stunningly beautiful. Rocky outcrops have entrances plunging into darkness where a corridor will lead to a central courtyard. Sometimes a small palm plantation accompanies the dwelling and every so often you see an ancient Berber woman emerge from the shadowy doorway clutching a small metal chipped teapot or a small child. 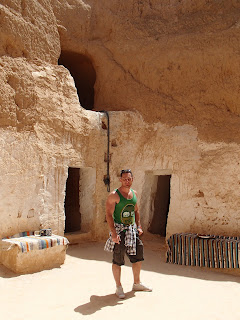 Some dwellings have been turned into hotels and another larger one is a cultural center and museum with a large garish sign above it.

Other however are timeless and when you enter them plunging yourself into the cool air from the scorching sunshine outside it is like stepping back in time.

Stepping back to a time where there was no internet, facebook, direct debits and modern day problems. It was peaceful, quit and incredibly still.

No mechanical noises or sounds from this century enter your ears. The silence is almost deafening.

Wandering thought the main corridor you emerge back into the sunlight where the central courtyard opens up to the brilliantly blue sky above. Small doors lead to a number of rooms of different sizes and some had massive wooden furniture in them and they must have been assembled in the room as they would no way fit through the cave door.

Everything was still and quit until a bus of tourists arrived.

It was time to leave.

Walking up the hill which the dwelling was carved out of the rock you look down from above. No barriers, railing or any ropes to stop you falling. I stood on the edge and had a ridiculous urge to jump down on the tourists below. Lucky I am slightly scared of heights and backed off to a distance that I didn't feel I was going to fall over.

Leaving Matmata I wondered how simple and stress free life must be for those living in caves. 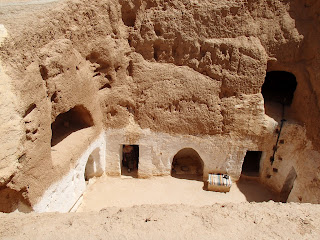 Then I read about how the government are trying to move the Berbers out to newer modern housing.

They cling on to their ancient way of life with white gripping fingers and show no signs of letting go.
Go luck to them I say. Long may they reign in this barren landscape.

Long may there way of life be preserved.

I feel honored to have seen it before it may be too late.

Posted by Unknown at 15:10
Email ThisBlogThis!Share to TwitterShare to FacebookShare to Pinterest