Being punched in the balls by a pirate 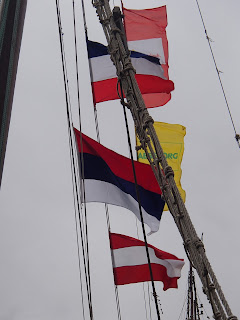 There are certain tourist things that I would normally avoid like the plague.


One such thing is a cruise or any tourist boat related activity.


Alas I broke my rule while in Tunisia recently.


Down by Sousse harbour were there terrible mock up pirate ships and in a moment of madness two of us decided what a funny idea it would be to go out to sea.


We were joined by a couple from where we were staying and one morning we found ourselves on deck looking out at the dirty polluted water front.


I felt out of place in the modern town and away from the wonderful souqs of the medina.


Looking back at the harbour front I could see unaware tourist being mobbed by trinket sellers and men with forlorn and ragged looking birds of prey. Those birds looked so unkempt and lost. They should be flying free not plonked on a tourists shoulder for a photo.


Nevertheless here I was on a tourist pirate ship bobbing along in the Mediterranean.


We were here now so better make the best out of a bad deal I thought.


To be honest I was bored stiff as we chugged along with the petrol engine belching out smoke and making the ‘galleon’ experience even more unrealistic.


I sat on deck and stared at the other passengers; Russians mostly. You can tell a Russian tourist a mile off.


They sometimes have mullets, love to be adorned in gold and wear clothes that would not look out of place in a jumble sale. 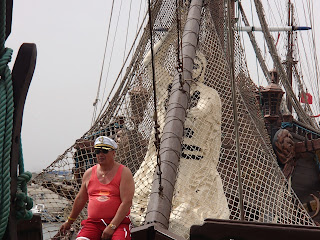 They really are an odd bunch and they do like a comedy hat.


One Russian we saw picking his nose vigorously while queuing for the bureau de change wore a fez. Another, this time on our boat donned a captain’s hat and a red vest and short combo.


Then when I thought things could not get any worse out came the ‘entertainers’ or as the Tunisian crew called it the ‘animation’.


One skinny little runt of a man who needed a good wash lay in glass shards and got Russian ladies of rather large proportions and even louder voices to walk on his back.


He also put his face on nails and got a German woman to stand on his head. Basically a masochistic array of stuff that really was rather boring and unexciting.


One of the Tunisian crew grabbed me by the hand and pulled me out from the audience. I didn’t want to get up but was reluctantly pulled to my feet.


They saw I had thinsg in my pocket and made me pass them to someone I was with and take my sunglasses off.


Then the topless skinny man who earlier was posing for photos as a pirate made me imitate his pose.


I stood with one leg in front of the other hands clasped in front of me with out stretched arms.
Standing there I had no idea what they were going to do, something odd probably and involving the pile of broken glass that was on a mat next to where I stood.
The Tunisian pirate stood next to me and imitated the pose and then walked off behind me.
Suddenly, without provocation and warning I dropped to my knees and all hell broke loose.
The pirate had stood behind me and swung his arm between my legs smashing me in the nether regions and sending me to the deck pile a sack of shit.
I fell to my knees and couldn’t breathe, the wind was literally knocked out of my sails and my eyes watered.
The pain of a good groin shot is indescribable really; all men know just how bad it feels when you are hit plumb on the plumbs.
I shook with rage and pain while all around me things went a little hectic.
The people I was with jumped up and surrounded me. Shouting started up and other people on the boat including a giant tattooed skinhead biker German seemed to fend me off.
The Tunisian crew were laughing and joking as if nothing had happened. All the while I lay on the ground in a world of pain hands clutching by balls making sure one had not popped.
To this day I still have no idea why he did it, was it part of the act or did he slip and do it by mistake.
The guys I was with said he just simply walked behind you and punched you in the balls. He question I ask is why?
The puncher broke through the protective wall of bodies and confronted me. By this time I had managed to pull myself up onto my knees.
He came right up to my face and started to laugh. I saw my hand had formed a tight fist and my knuckles were white with the pressure. My arm tensed and cocked backwards.
I wanted to hit him so hard and also grab him by the throat and throw him over board.
Somehow I controlled my temper and shouted at him through painful gritted teeth to F off. This action gave the crew the message and they all suddenly disappeared.
The entire mood of the boat changed.
The Russians all looked on with horror at the crew and the bog German approached and offered me a cigarette.
All went quit and the eerie stillness was only broken by the sudden starting up of the engines as we headed back.
A few passengers clapped me on the shoulder, gave me the thumbs up, shook my hand or in one case hugged me before they disembarked.
Now was the hard bit.
I refused to get off the boat until I had got my money back.
Finally after quite a discussion I left with the cash in my pocket.
The moral of the story; never travel with pirates, especially Tunisian ones.

Posted by Unknown at 15:18
Email ThisBlogThis!Share to TwitterShare to FacebookShare to Pinterest