The Toyota land cruiser rattled along a dirt track. 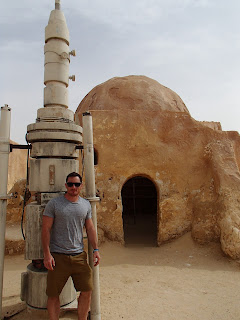 Either side of the car was vast nothingness, a barren landscape void of all habitation.

Occasionally a small long dead shrub would fly past the window or a lone plastic bag would flutter in the desert breeze.

After a while of spine juddering travel the road gave way to sand. The sands grew in size until we were not in a barren landscape anymore but a mountain range of dunes stretching for as far as the eye could see.

This was the Tunisian Sahara that I had come to see.

The windows of the car were shut to avoid the dust and sand getting in and the atmosphere inside became stuffy.

Our driver was a local man a Berber from can trace his ancestry back to before the Arabs arrived in North Africa.

He knew every dune and every contour of the land as he raced up the nearest dune and bounced down the other side.

I gripped the handrail and my backside lifted off the seat when we shuddered over the crest of the dune.
A huge smile swept across my face at the sight which greeted me. Nothing but rolling sand mountains were to be seen.

This was the true Sahara Desert, land of mystic tales and ancient crossings.

Our destination however was not that ancient. 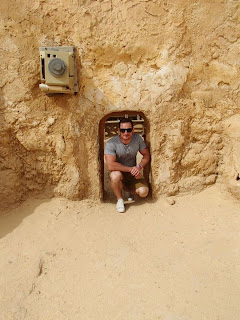 Our driver hustled over dunes sending me dancing about in my seat, I couldn’t help myself and let out laughs of appreciation as he aimed for the biggest curves and coolest looking dunes to mount a four wheel drive attack.

Soon a small dot on the horizon appeared. It stood out against the brilliant white sands of the desert and slowly, ever so gradually grew bigger.

This is what I had come to see.

The land cruiser pulled up a hundred yards away from a large dune. I got out and closed the door.
I stepped onto the compacted sand and walked forwards.

Plunging my feet into the dune I raced up its steep banks and looked down at the sight below me.

There below my feet was the desert battered and semi crumbling set from Star Wars.

Unfortunately it was not from the original Star Wars movies back in the 70s and 80s. This was the 13 year old Phantom Menace film set.

Left here to face the elements of advancing and unrelenting desert.

You could see parts had collapsed and been sand blasted to pieces but the majority of the structures were still in tack and looked very sci-fi.

When you got up close however you could see how cheaply they were made. The robotic instruments protruding out of the ground were all widen and one almost fell over when I touched it. Luckily I grabbed it and placed it back in its rusting socket.

If I closed my eyes I could imagine what this must have been like when they were filming. A hubbub of activity and many people is wonderful costumes.

Now it looked rather sad and quiet.

I wondered around it all and went into every building that I could. Some were padlocked shut and others were bare inside except for the wooden skeleton that holds them in place.

Sadly the light was failing and it was time to leave. As the land cruiser pulled away and once again headed for that far off bumpy track I looked out of the window.

Star Wars was a massive part of my youth and as I saw the film set vanishing into the distance it made me feel rather old. Almost a metaphor for growing up. 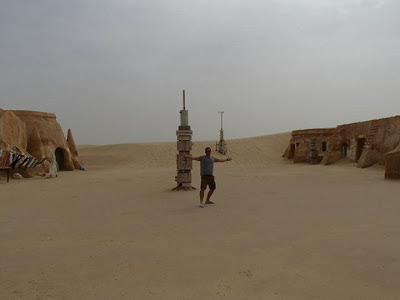 A smile crept across my face as I realised one thing; I will never grow up!
Posted by Unknown at 07:52
Email ThisBlogThis!Share to TwitterShare to FacebookShare to Pinterest