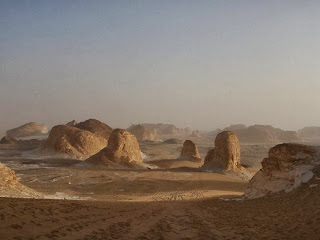 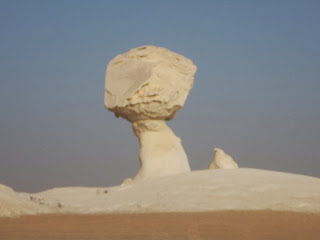 Back in 2011 I stood in the white desert in the pitch black. The hard rocky stone crunched under my feet as I tried to find a radio station on my little travel world receiver.
Suddenly through the static and sudden outburst of shouted Arabic I heard the dulcet tones of the BBC world service.
A voice came through the speaker and reached me sending me back to my days as an English teacher in Ghana where I would tune in everyday regularly. 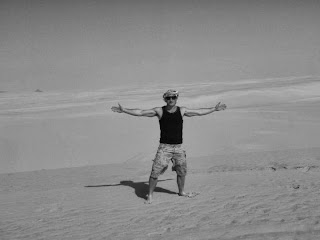 The static crackled and then suddenly a voice as clear as day came through and the topic of conversation was the 'protests gathering momentum in Cairo'.
Then the voice and signal was lost in the desert and all became silent as I turned the radio off and walked back over to the camp fire where huddled under blankets a few Egyptians sat sipping tea with the other people from the three Toyota land cruisers that we had all crammed into.
The White desert is a beautiful lace. I sat and edged my way closer to the fire for warmth and reflected on a day of bumpy travel and magnificent landscapes. 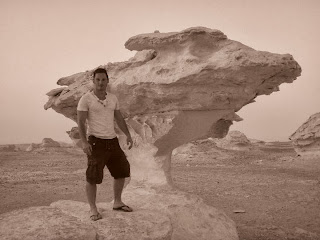 The white desert also known as the Sahara el Beyda is a massive white sandy and chalky desert. Large chalky rocks have been shaped over the years by the winds and sands carried by them. Eroding them over time into brilliant shapes. Some are so large on top that they look like they will fall over and another one resembles a giant rabbit.

These rock formations where they are large on top are known as mushroom rocks and do resemble the fungi. We arrived bumpily off road and as I saw them a smile crept on to my face.
The desert certainly looked beautiful and when the sun was setting the large wind swept chalk rocks created long eerily glorious shadows that crept along the ground becoming more elongated as the sun sank below the horizon.

I sat staring into the hypnotic flames of the fire. The crackle of wood echoed through the surrounding deserts and if you strained your ears you could hear distant groups sitting around another camp fire chatting away.

There snippets of laughter and conversation became louder when the winds changed but still they seemed very far off in this giant expanse. 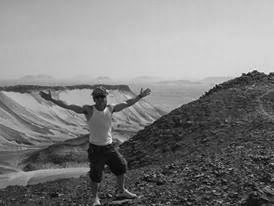 When you are in a desert the night becomes a treasure trove of stars. The sky lights up with twinkling beauty and you can lie on your back staring at them hoping to see a shooting star whiz into life and suddenly disappear again.

There is a calmness in a desert and a peace that I cannot find anywhere else. Especially at night after the searing heat of the day has been put away for the night.

The stillness and whistling melody of the winds can make you stand staring into the distance for hours on end. Lost in the thoughts running through your mind, time seems to stand still and nothing else matters as the stars twinkle overhead.

My mind went back to the voice on the radio and at that moment in time I wasn't concentrating on the Cairo riot madness that would be awaiting me and is another massive story entirely.Instead I was here in the present in a desert enjoying the stillness that engulfed me.

Nights can be cold in the desert as you wrap up and slowly as the fire urns down to embers migrate towards the coals in your sleeping bag.

The cold is worth every minute though as you wake to a glorious sunrise that slowly creeps alive revealing the wonder around you which were hidden by the cloak of darkness.

The sun chases away the shadow and the rock formations stand proud and un-moving. They look like at any moment their giant top heavy features will crumble and the small stack of chalk holding them up for centuries will suddenly give up and shatter.

The sun rises and with it the heat of the day starts to grow. The cold and stiff limbs that you have developed over the night are soon getting back to life and warming up and you shred layers of clothing worn from the evening around the fire.

The stillness is still there, but not as abundant. Coughs, splutters and the noise of a 4x4 starting up give a life to the atmosphere and it somehow seems like the desert is stirring.

The sun is now bright and you stare in wonder at the erosive power of time and wind. The rock formations look even more epic in the blazing sun which is now hot and sweaty. 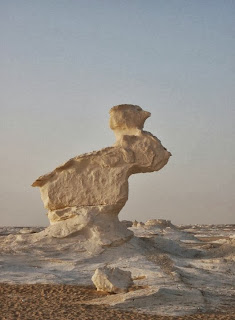 Too much background noise take away something from the magical landscape so much so that I retreat into ipod mode to listen to some music that suits the surrounds.

I clamber back into the toyota and watch as the landscape moves and changes as we drive on. Onwards to the Western desert now. Another sandy slice of beauty.

I watch as after hours the last of the rock formations finally slip from view and enter the world of my memory, mind and imagination.

Posted by Unknown at 01:30
Email ThisBlogThis!Share to TwitterShare to FacebookShare to Pinterest