The sacred pools of Paga 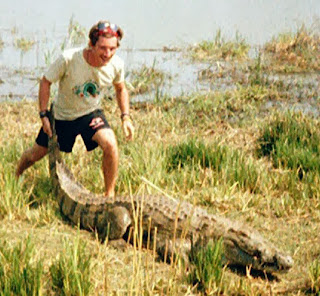 Have you ever fondled the tail of a crocodile?
That is not the sort of question you get asked that often, or ever even!

You can hardly describe a giant prehistoric beast with rows of evil looking teeth as an animal that you would want to cuddle up to.

Stories from Crocodile Dundee and travels in darkest Africa have told over the years of horrific crocodile attacks and near misses.

Therefore this picture of me holding a tail of one such beast needs explaining.


Way back in 2005-06 I was a volunteer teacher in Ghana. Because teachers get a bit of time off during the holidays I traveled the country.

One such trip saw me up near the Burkina Faso border in the small frontier town of Paga.

Paga is not too far from the capital of Ghana's Upper East Region of Bolgatanga.

Famous for one thing more than any. That of course is the famous crocodile pools of Paga.

It is a strange story of how Paga came to have these 'tame' crocodiles. One such story is that 1200 years ago a man called 'Naveh' was saved by a crocodile while out hunting.
Saved from what? whom or how it is unclear!

The locals of Paga which include both people either side of the border believe that the crocodiles contain the souls of deceased ancestors.

Therefore they believe that humans cannot be harmed by these crocs.

I arrived on a hot tro tro (mini bus) from Bolgantanga and stepped off stretching my legs after sitting next to a lady breastfeeding a baby who also had a months supply of vegetables on her lap.

I wandered down to the pools which are clearly signposted and unmissable as apart from crossing the border are the main reason people will come here.

Ok I thought, maybe it is slightly cruel to treat crocodiles as objects for photographs but curiosity got the better of me.
I also thought that maybe these crocs were not as docile as made out to be.

Standing on the edge of the pool but well out of of lunging crocodile attack distance I observed what was going on.

Locals would take someone to the pool after 'treating' the croc to a dead chicken which they threw at the beast.

The giant beast snapped greedily at the chicken and after chomping it down lay still in the sun soaking up the rays and heating its large body.

Being slightly dubious I wondered if maybe those chickens were in someway tranquilized or drugged in a way that made the crocs become docile.

Drugged or inhibited by friendly spirits never the less I paid my money to approach them and the man threw a chicken at a new beast that had emerged from the water.

'Do you want to lay him', the man said. I raised my eyebrows but knew he meant would I like to sit on its back.

Instead I held its tail in my hand as when I approached it started to move slowly and turned its large head so one eye was fixed on me.

Looking into that dead emotionless eye I knew this creature could rip me limb from limb if it wanted to.

'Sod sitting on that thing I though'. Instead I grabbed the tail and held it at arms length.

I could feel the beast move slowly and the muscles in the tail contract.

The man who asked me to 'lay' the crocodile approached and beckoned me to walk away.

Another massive crocodile was emerging from the water.

I followed the mans eyes and saw the lumbering shape slowly emerging from the shallows.

Definitely time to leave and I placed the tail back on the grass. 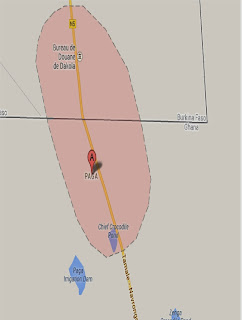 As I did the croc lurched forward and the tail swiped widely from side to side.

Checking to see the whereabouts of his mate I exited rather swiftly and walked to the safety of the red dirt road.

There were not many tourists there except a handful of us 'volunteer teachers' and one rather looking old lady. Locals must be used to scenes like this as apart from the man who fed the chickens there was no one paying any attention to us.


Later on I asked a few questions and got a few sketchy answers.

There were over 100 crocodiles in the pool at any time. No one seemed to know how many but as the pool was landlocked how did they come to be there?

That question drew a blank.

One observation I made however was that the locals do not fear these creatures. I saw an old lady washing her clothes in the shallows not 20 feet from the peering eyes of one crocodile peeping out of the water and creating a small ripple as he or she took breaths.

In some cases these crocodiles are treated as pets; it is very strange to see a man aimlessly wander past leading a donkey not five feet from a crocodile. He simply ignored it safe in the knowledge that he was safe. A strange sight to see.

Out of all the crocodiles in the world these are apparently and probably undoubtedly the most dare I say it 'tame'.

To be honest I believe it. Where else can you hold the tail of a 'wild' crocodile and live to tell the tale.

I am sure I wont be doing it anywhere else on my travels! 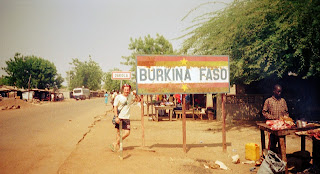 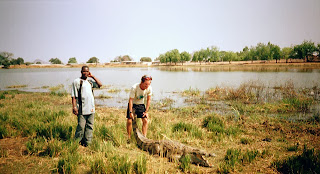 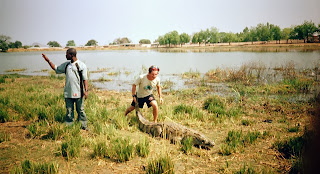 Posted by Unknown at 15:29
Email ThisBlogThis!Share to TwitterShare to FacebookShare to Pinterest