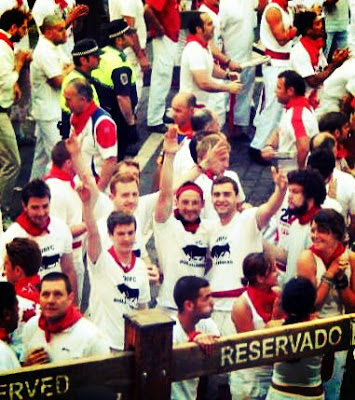 Running with 12 angry bulls down narrow streets risking being gored and trampled by other runners would not sound like an ideal 6 day getaway.

To Ongar Rugby Club member’s however this was an adrenaline fuelled trip of a life time that they could just not say no to. 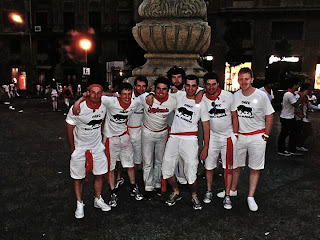 The festival of San Fermin in the city of Pamplona conjures up images of people being smashed into walls and flipped into the air by the bulls.

In fact 15 people have been killed since 1924 and countless others injured every year.

Described by Ernest Hemingway in 1926 as an explosion the festival of San Fermin, Northern Spain certainly has not lost any of its magic with old age.

Ongar rugby club members travelled to the Basque Country to do what many people would consider utter madness. 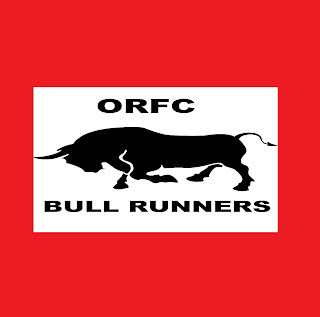 You tube video that we briefly appear in

Another video we may potentially appear in


Terror and chaos. Video filmed of inside the arena and all the action 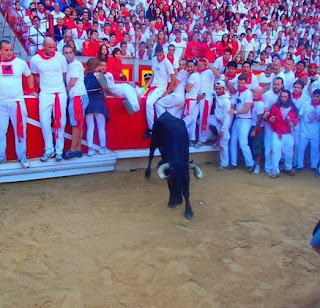 The festival opens with a sangria fight to end all sangria fights, The city is soaked pink and everyone is dancing, singing and celebrates the opening of San Fermin at the town square in a sea of red and white.

The actual run starts early morning in the narrow streets of Pamplona and when the canon sounds the bulls have been released.

You hear them before you can see them as their hooves rattle on the pavement and their cowbells ring out. The crowd surges and you move without your legs taking you anywhere, literally being carried along in the melee.

Then suddenly the bulls are on you. 6 angry bulls charging down. 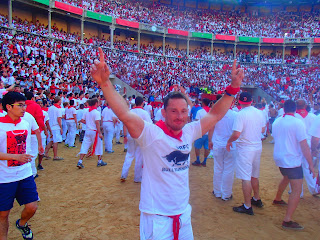 The crowd surges, splits and bodies go flying into the air. A lone bull breaks off and charges at a man with a look of utter terror in his eyes. He manages to jump the fence at the very last moment before the bull crashes into it.

The bulls are past and you run head down arms pumping to try and reach the arena. 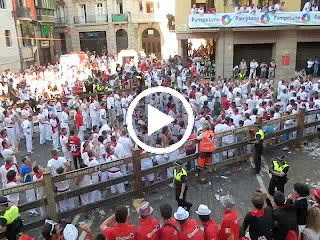 This however is only the start as in the distance in the corral another canon has sounded and 6 more large dark eyed bulls come hurtling down the streets. Some fall and stumble as you run tightly round the aptly named ‘Dead man’s corner’ while others plough deep into the crowd.

Somehow the Ongar rugby boys got past the bulls and headed down into the centre of town as the crowd chanted and screamed.
They ran down the tunnel and the noise rose. As you enter the arena it reaches pandemonium level. The sound reminiscent of a gladiator enter the Coliseum.

The bulls run through the arena tossing the last people who unluckily manage to get in the way before heading out to their pens where each one will fight later on in that arena.

This is when the fun begins. One after another six young angry bulls will be released into the arena. Their sole purpose; to cause as much mayhem as possible.

The locals lay down in front of the arena entrance and the crowd gasps in unison as a bull hurdles the bodies. The bull looks up sees immediately someone running towards it and promptly dispatches them into the air.
This event in the arena is called the amateur bull fight and the people lucky enough to get into the arena before the gates slam shut try and touch the bulls or grab the horns.

Ben Whateley-Harris managed to grab a horn while Dan Riley somehow did a matrix style dodge as the bull charged at him. 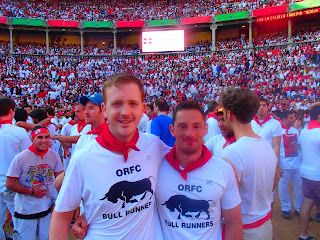 Pandemonium ensues and the rest is a blur of cheers, collisions and dodging. The stadium is a mass of colour and all around you everyone is resplendent in white with red neckerchiefs and red sashes. 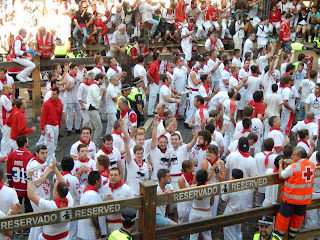 Suddenly it is all over the bulls are herded out by the stick wielding pastores. Everyone embraces and broad smiles can be seen on all faces around you.

We have all agreed to come back as the adrenaline rush is like no other in the world. 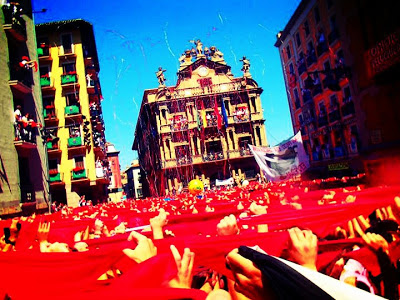 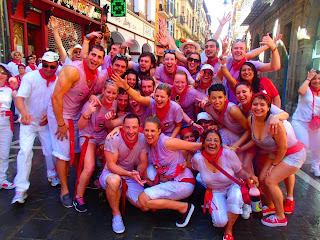 Posted by Unknown at 07:13
Email ThisBlogThis!Share to TwitterShare to FacebookShare to Pinterest