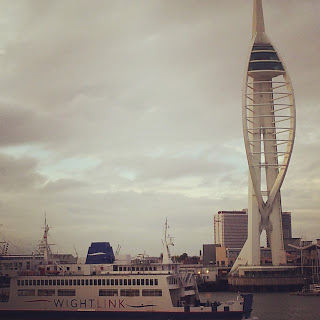 You arrive in Portsmouth and immediately see the naval traditions all around you.

HMS Warrior stand proudly at the docks, Britain's first iron hulled warship and all the pubs have nautical names.

Streets and buildings have names of battles won at sea in days gone and to see HMS Victory; Nelson's flagship you have to fork out a ridiculous £26. After that we didn't even bother to see how much the Mary Rose would cost to see.

The reason Ii found myself on a bright but windy day down by the ferry terminal was that I was off to the Isle of Wight.

I had never been before and didn't know what to expect really.

Of course I knew what attractions and historical landmarks were awaiting me upon my crossing but when I thought about it I could not think of a single famous person; historical or otherwise to have come from the island.

Once the car was loaded and the ferry had been piloted out of the Solent and over to Fishbourne dodging Napoleonic sea forts, it was time to explore.

Off the main road the Isle suddenly jumps back in time 50 years. Single file traffic along country lanes where the hedgerows are reclaiming the tarmac greet you.

Speed slows down to 10 miles an hour round corners as you try and avoid hitting a tractor head on or a group of children in brand new backpacks looking lost on their Duke of Edinburgh's expeditions.

Finally we arrived at our destination, the home of a friend and his misses who had moved here for work.

Somehow this small island where the mist rolls in off the sea making the needles impossible to see while we were there didn't suit them. Coming from closer to London it was as though they had stepped back in time when accepting his new job.
It was quite funny to listen to their points of view on the islanders being firmly rooted in the past with opinions, views, morals and the speed that they drive.
It was more amusing to listen as he got progressively more drunk and started to bad mouth the locals.

So what did we get up to on the Isle of Wight. To be honest we didn't see a lot of it. As I had mentioned before the mist shrouded half the island in secrecy and you could hear the sea but even when on the cliff top you could not see further than a meter in front of you. The wet mist hid all the delights of the coast as we ventured to the west of the island.
On the other hand the mists abated and the sun came out giving us brilliant views over the Solent to the main land where you could see the spinnaker tower shining in the sun down in Portsmouth.

We visited a local garlic farm where I refused point blankly to buy the garlic flavored beer and we also visited a gorge. Or rather as they are called a 'Chine' on the island.
I was rather naughty in the chine. We were wandering up and came to the end of the pathway. There was the upper entrance and an old shed selling tickets. I couldn't resist it but slowly and very quietly slipped the latch on the shed door locking the ticket lady inside. She was unawares and then I ran off giggling.
Of course the chine is busy and soon a tourist would let her out, but it did make me feel ever so naughty!

I think I needed to take it out on something after watching the Lions lose in the dying breaths of the game against Australia. Watching that game had given my heart a workout more on the bad side than good.

Shanklin, Ventnor and Godshill are picture postcard Victorian seaside Britain at its finest. They are truly chocolate box covers of town and no wonder it attracts the tourists from the older generation who stroll or rather amble and shuffle along the promenade showing off their dandiest socks and sandles.

The picturesque villages however cannot hide the unemployment and the reliance on seasonal work. This manifests itself in the number of people hanging around; sipping from lager cans on the street corners. A contrast to the 'visit Britain' poster landscape in front of you.

In the end we didn't see as much as we wanted to. The elements and the mist rolling in from the sea reduced our sightseeing to the East of the island. We did however see Bembridge and the lifeboat station, the fort and the Lord Yarborough monument on top of a hill over looking Portsmouth, the Solent and the English channel beyond.

We left on an early morning ferry feeling that we had not seen all there was and that we had only read the synopsis of a book rather than become lost within its pages.

Posted by Unknown at 03:15
Email ThisBlogThis!Share to TwitterShare to FacebookShare to Pinterest