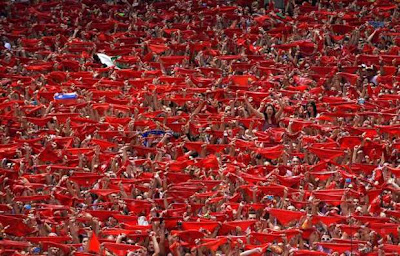 How do you write about the most incredible experience of your life? The time where you were most happy, excited, adrenaline fuelled and hyped up?

The answer to that question is; you try, you just try!


Ever since I read Ernest Hemingway's 1926s novel The Sun Also Rises I have been on a mission to travel to Spain and seek out the fun and thrill of the festival of San Fermin. To experience the Encierro; which is more commonly known as the Running of the bulls.

Famous for pain, blood, guts and gore and the danger posed by angry bulls hurtling down the cobbled streets while people fall in from of them and try in vain to run in the crowds.


The adrenaline rush of a lifetime, the thrill bigger than all thrills and the chance to run with a ton of steak hurtling at you with anger in its eyes and hatred in its heart.

Ernest Hemingway had a profound effect on me when he described the festival as 'Exploding into life'.

In 2011 I travelled to Pamplona in the Basque country, Northern Spain to seek out this explosion that he writes about in 1926.

What I discovered in this sunny sangria soaked city was more than I could ever have imagined. The pomp, party, entertainment and shear carnival atmosphere must surely rival any event on earth.


San Fermin grabbed my heart and held on. The finger nails dug deep and I was hooked. I was more than hooked I was a convert.


I read information, books, pamphlets and guides to soak up like a sponge all the information I could get about the festival. I watched videos online about running tips from the locals to hone my skills.


I became addicted and after losing my bull running virginity in 2011 returned the following year with a larger group of friends and would be runners and took the city by storm.


As I write this this year’s festival is not far away. In 17 days’ time I will be sitting on a bus as it travels through the night to reach the city where no one seems to sleep and the party continues even when there is no more alcohol, space to dance or light.


Firstly the group of would be runners I have assembled are possibly the best and most outgoing. All want to run and even though I had to take two hand in hand shopping to get their white attire for them I know when the time comes they will show true mettle and face those bulls and reach the arena like we did last year.


"To Ernest Hemingway, Nobel Laureate in Literature, friend of this city and admirer of its fiestas, which he discovered and brought fame to."


In 1926 a barrel chested American writer who preferred writing standing up arrived in Pamplona for the festival. The resulting piece of fiction that came from his pen and typewriter inspired me to retrace his footsteps and experience the festival for myself.
Article in the independant about Hemingway's love affair with Pamplona

Ernest Hemingway held out a hand from the grave and pulled me to Spain.

Papa as he was affectionately pulled me into a world of macho, adrenaline fun, debauchery and brilliant Spanish culture.


I knew I had to do the outgoing, big drinking, sportsman and big game hunter proud. I had to run and run good.


Running was not optional for me. I will of course miss the views from the balcony or inside the bull ring on the terraces  but I will experience the heart thumping adrenaline rush you get when you heard the rattle of hooves on cobbles and the dinging of a cow bell.

You know the bulls are close when you run. You can hear them and the anticipation in the crowd grows and spills out onto the streets. 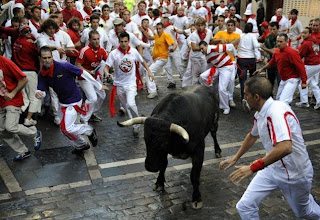 The canon has sounded so the bulls are out of the corral and hurtling down alleys ways towards where you are standing.


You manage to muscle yourself into the run down by the old town hall and soon the surging and screaming crowd pulsate forwards.


There is no space to move until as in Moses fashion the crowd parts and bodies fly in all directions to avoid the horns of the bulls that skid and rattle towards you.

Your feet move as fast as they can and the crowd bunches up momentarily lifting you off your feet and along with the crowd.


Bulls skid and topple and crash to the ground at Dead man’s corner as they try and cope with the tight turning circle.

People resplendent in white and red throw themselves against walls to try and hide from, dodge and avoid the raging eyes of the animals.


The noise level reaches pandemonium and all around you is chaos. But do you know what? It does not matter at all.
Somehow you dodge, weave and by the skin of your teeth and luck you enter the arena. The noise grows as you run down the tunnel and because you enter just after the bulls you cheering increases. Running in before the bulls garners jeers and booing.
You are here, safe for the time being. Safe that is until they release the six young bulls who have a small cameo in the arena. Each one that comes out is progressively angrier and more mad than the last.
BNodies fly, local hurdle the bulls and Australians get battered. Blood and sand a gladiatorial battle betwwen those who run and touch the bulls and those who scream and run from the bulls begins.
Ernest Hemingway must have seen it all with his own eyes. The run is very much the same from when he first visited here in the 1920s. Bulls are the same beasts, angry and provoked and dangerous when separated.
People are the same, minus the head cameras and running shoes we generally fight or flight. In the case of the bull run panic and mayhem overtakes them both. You may be macho and stand up to a bull but you will end up on the floor after being tossed in the air.
Battle scars and shown off proudly and the faces of jubilation afterwards could have come from any year, any decade and any one through history.
Hemingway is known to have been in the arena when the younger bulls are released. This is called the amateur bull fight where locals, strangers and travellers all can have a go at dodging the bulls. This is known as the corrida and in 2012 I took part. Sadly in 2011 we were too late and got stuck in the surge of the crowd and the arena gates shut fast.
The following year I was determined to get inside and what I experienced will live with me forever.
Hemingway was a rough, tough bear of a man who boxed, hunted and drank like a trooper. He was a man's man and would have loved the corrida.
I can imagine his large frame staring at the bull moustache bristling int he faint breeze and a wry smile creeping across his mouth as he faced down a bull.
Hemingway was fascinated by bull fighting and went on to write Death in the afternoon and the posthumously published A Dangerous Summer in 1985  about a rivalry between two Spanish bull fighters.
Alcohol features heavily in the sun also rises, the main characters drink heavily and to excess. One even passing out in the back of a shop and waking up in the store room. Pamplona is full of alcohol and the cheap availability does mean that one does partake in a tipple or five.

It would after all be rude not to especially when a toothless old Spaniard offers you a bottle of wine with a smile and a twinkle in his eye.
During the time of writing Hemingway lived in Paris and often visited Spain. In fact he said that Spain was his favourite European country. Back home in his native US it was the prohibition era. Alcohol was universally banned and maybe this is the reason why the characters hit the bottle hard. Although many academics have come up with numerous reasons and analysis of how. But in my mind I think it is because when in Pamplona, San Fermin takes over and you join in. Simple really and alcohol is a massive part of that.
The book became a film starring Tyrone Power in 1957, but I have to admit I have never seen it and am loathe to buy it in case it ruins the books for me.
The statue of Hemingway erected by the people of the city in 1968 stands outside the bull ring. I stood gazing up into the bust and wondering what old Ernie would make of it all.
The translated inscription reads.
"To Ernest Hemingway, Nobel Laureate in Literature, friend of this city and admirer of its fiestas, which he discovered and brought fame to."
If Ernest Hemingway had not put a gun to his head in 1961 in rural Ketchum, Idaho in 1961 what would he think about the legacy he created at Pamplona. His statue shining in the sun and appearing in all tourists photos and the influx of thrill seekers descending upon the city.

Would he be proud?

But if it were not for him would I have experienced the best 6 days of my life, twice and soon to be a third time.

Thank you Ernest. I hope when I run you smile down on me through your big white beard.
You showed me one of the true wonders of the world, an experience that will never diminish in the mind and one that will not leave the heart.

The Running of the Bulls, the encierro, San Fermin, Pamplona. Call it what you will the true fact of the matter is that I bloody love it! 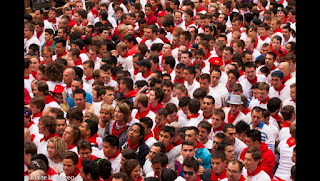 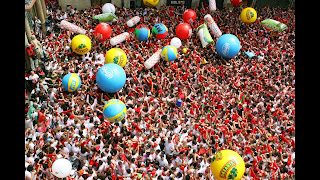 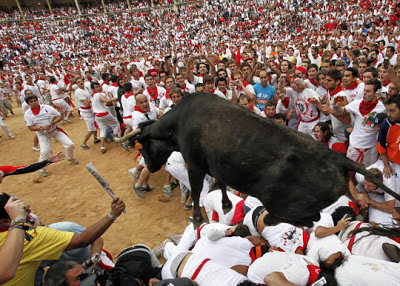 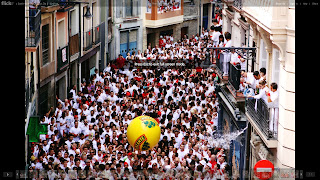 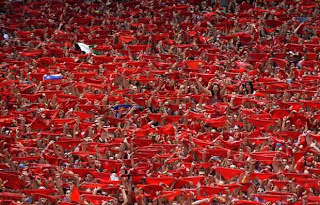 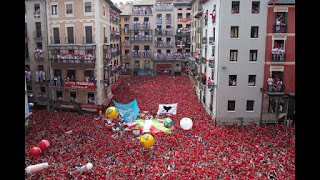 Posted by Unknown at 15:03
Email ThisBlogThis!Share to TwitterShare to FacebookShare to Pinterest