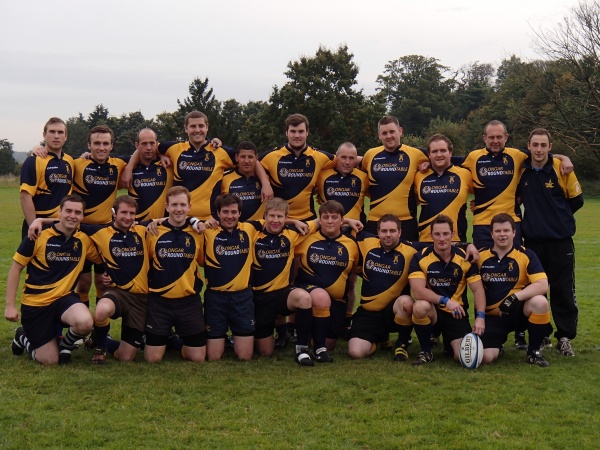 20th October 2012
Ongar 18 – 12 Ilford
Tries: Whateley-Harris (2), Browning
Penalty: Fenner
Ongar smashed their way to victory against Ilford and kick started their season. After nothing but defeats Ongar showed guts and determination as they put Ilford to the sword.
Last week’s training session boasted 21 people all slogging their guts out to get into the match day squad. This week we had to turn down players; something that is not commonplace for the Os.
The match kicked off and was lively from the start. Dave Blake captained the side and showed his power as he ran bull dozer like at the opposition.
The score was pointless for a large section of open play as both sides felt each other up. Ilford had a few fast breaks and exposed some poor tackling and over lapping Ongar’s defence at times. Ongar were lucky to not concede any points during the first half but showed grit and somehow managed to get their game face back on.
The opening score came from a fast break and good hands from the backs. The balls went along the backline and found Ben Whateley-Harris who on his 30th birthday used his pace to round the opposition to touch the ball down over the line.
Aaron Hardy stepped up to take the kick. He had been restored to number 8 after last week’s fiasco at ten. This week he didn’t say ‘I’ve got this’ before he took the kick. He simply stepped up and missed it. Not a word, just resignation to the fact that he will forever miss from now on. He says that he was cursed by Jeddy and will miss all his kicks until the spell is broken. The spell can only be broken when Aaron starts to celebrate Black history month.

This try was the potions Ongar needed for a shift in gear. They tore at Ilford for a large part of the first half after this. Although they sometimes slipped into tackling too high and giving away simple penalties. The pack was solid and they protected Ralton Fenner at nine expertly. The use of pods was good and Jon Browning playing at ten straight off a plane from Madrid put in some good distance kicks to find touch.
Ongar used their powers to good use in this game. The scrum bulldozed Ilford at times and the backs showed agility, pace and power. Alan Elvin must be singled out for praise. He put in a tireless performance and was everywhere all over the pitch like a terrible rash. He then in the club after the game somehow managed to get out of his half yard of mucky drink and give it to the new old man Ben Whateley-Harris who collapsed a little after drinking it. He was later found outside trousers round his ankles being manhandled by King Leonidas and Saint George.

Birthday boy Ben Whateley-Harris then collected a ball from Neil Wyndham and cut inside and managed to muscle his way over the line for his second try of the game and 3rd of the season.

Aaron Hardy stepped up and fluffed the kick yet again. Michael Blake started to abuse him from the sidelines and a little tear slithered down Aaron’s cheek. He felt like Sampson when Delilah cut off his hair. This however was more like the feeling Dave Lewis got when Jeddy handed him off and caused Dave to hibernate for 3 weeks.

Ilford to their credit got back into the game with two tries of their own. One of which they converted. During the second half Ongar rode their luck a little. They gave Ilford massive overlaps and somehow didn’t concede. John Minns was screaming from the sidelines at the players to come over. How Ongar didn’t conceded in these moments was sheer luck.

Aaron Hardy missed the conversion and by this time his cheeks were all puffy and red from all the crying.
Ongar continued to the last. Everyman gave it their all. The front row of Neil Springate, Fobwatch Minns and Andy Surrage put in a great performance. Michael Blake came on to a rapturous applause from the capacity crowd. Tom Bristow showed that he could gallop with the balls and Neil Wyndham ran like a 67 year old.
There was just time for Ralton to show a tearful Aaron how it was done and slot over a penalty. Giving Ongar a final points tally of 18.
A special mention must go to Nick Cronjaeger. He ran across the pitch to make a try saving challenge. The loud whack when he connected made the crowd gasp as one. Peanut lay knocked out on the ground. A brilliant tackle and a true example of laying his life on the line for Ongar. Sadly he had to go off afterwards as he didn’t know the score or who was winning and when asked who the Prime Minister was he said John Berry!
Sadly that was game over for the entire night and Peanut missed the birthday boy being stripped naked in front of the parents, waxed and put in a dress.
The final whistle went and a huge cheer went up. Ongar were off the mark. They had put in a great performance and shown some great team play. They are still a uncut diamond but they showed glimpses of the gems that they can be. The backs ran at Ilford with gay abandon. They back themselves and the support play was fantastic.
On the side-lines some people who had not watched Ongar play for a while said we look like a different team. Younger, fitter, stronger and we gelled much better as a team.
Once we sort of our habit of missing a few tackles we will be a force for anyone in our league. The believe ios back and the skill was certainly back.

With the match won and the birthday boy naked Ongar celebrated in true fancy dress style. Jeddy came as a doctor and was seen resuscitating Dave Blake’s bottom in the changing room and Dave Lewis came as a Persian! 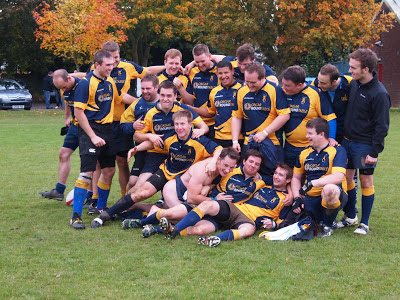 Posted by Unknown at 09:13
Email ThisBlogThis!Share to TwitterShare to FacebookShare to Pinterest