A photo speaks a thousand words

Over the years and in and through the many places I have been I have always had a camera on me. It must be a fear of missing something or a compulsion to record what I see but the camera is never far from me.

I would not go as far as saying I am a good photographer; I have no training and only use a small compact digital camera. I think I am a lucky person who happens to take a lot of photos. Therefore I am bound to get a good one every so often.

I come back from trips and have taken in excess of 500 pictures. But inside that large number there is a gem or two.

Here are a few of my favourite photos that I have either taken or appear in and the stories they tell. 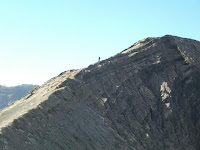 An active Volcano in the Pacific ring of fire.
This photo was taken of me as I walked the rim looking down into the crater as the hot gases escaped from the Earth.
Bromo last erupted in 2011 and in 2004 a year before I visited two people died from an eruption. 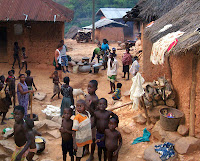 A friend and I hiked up to this village that olny had a fleeting mention in the Bradt travel guide. We arrived dusty and covered in red clay from the walk.
When we arrived and were greeted by the village elders who we had to pay with 'Apetishi' a local highly alcoholic drink to visit them.
After a few shots of this strong liquor they were most hospitable and we wandered round with kids chasing us and chanting at us. Before that they were quite stand offish!
It was a shame we were only there for an hour because of the fading light and the need to get back down the mountain.
This photo taken with me in it shows just how I stuck out! 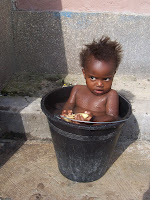 You cannot look at this photo and smile. The baby has the best look on his face as if he/she is saying 'What you looking at Mr.'.
I entered this photo into a local competition at a rural show. I lost but to a picture of a tree and didn't even get a third prize. I think the judges were racist! 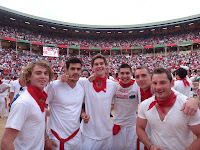 Not the greatest photo but this one was taken when I had never had such an adrenaline rush.
The previous year I had run with the balls but not got into the arena This year I was determined that I would and I did.
We were all as high as kites from the buzz and had the thrill of a life time. So much so that I am going in 2013 for the third year running.
While in the arena they release 6 young steers one at a time, each one gets progressively more agitated and mental. Therefore they charge into the crowd and send people flying. The local and veterans slap them and jump over them. Some even back flip over them. Many get injured but everyone comes away with a heart beat faster than they ever could have imagined. 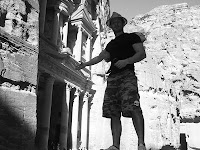 One of the most stunningly beautiful places I have ever seen.
This was a personal journey with deep meaning for me. My late father came here in the 1990s and I wanted to see why he waxed lyrical about its splendour and majesty. I found out instantly as I walked down the Siq to be greeted by the Treasury. 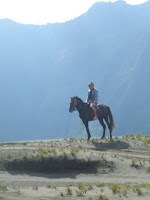 Mount Bromo again. This was taken of me while I sat on a knackered old horse riding up to Mount Bromo.
I used to ride as a kid so hired the horse for a small fee and galloped across the sands towards the active volcano.
I have to admit that at the time I thought wearing a straw cowboy hat was rather cool so I am sporting it in this photo. It adds to the photo I feel and is one of my favourites. 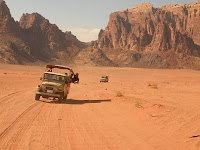 Travelling in the footsteps on Lawrence of Arabia and hanging out of a jeep en route.
Wadi Rum is breathtakingly beautiful and even better when you camp out at night. One night we got so drunk in the desert eating a vodka and rum laced pineapple that I had to be put to bed and woke up huddled to a mate on the sand. 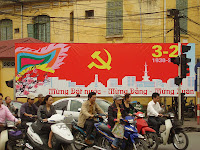 Taken in the bustling motorbike infested streets. Crossing the roads are dangerous here. Imagine crossing the road in Italy. Well double the danger and you are no where near close. 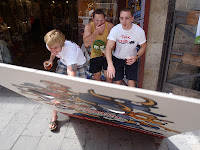 A moment caught in time which shows three reactions.
While posing with our heads through a cut out sign the sign accidently fell over.
One person grabbed it, one hesitated and I did the campest pose of all time. Classic! 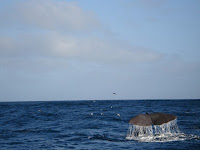 In 2007 I backpacked around New Zealand seeing the wonderful country and getting very drunk. I bungy jumped, luged and climbed mountains and was blown away by the beauty of the country.

While travelling in the South Island I went off on a rickety boat that had a 'whale spotting dog' aboard and saw this humpback whale.
Needless to say I felt rather seasick on this trip. 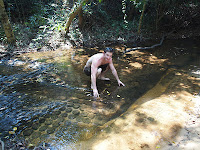 Kkbal Speen is otherwise known as the River of a Thousand Lingas. A linga is a penis shaped fertility symbol.
So after hiking up the hills to reach the beautifully carved river bead I was greeted by penis carvings of all shapes and sizes. You are also not allowed onto the river bed but no one was watching when this photo was taken. 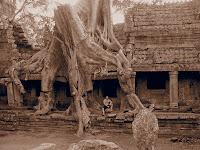 Cycling out of the bustling city of Siem Reap you enter the Angkor archaeological park and as it was late after noon this temple almost reclaimed completely by the jungle was empty.
It was wonderful to walk un-pestered by trinket sellers and not see another soul as the sun set. 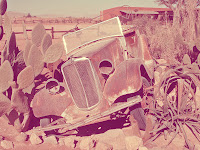 Before Syria was a bloodbath I had the pleasure to travel through it. Visiting ruins galore and wonderful cities it was a delight to experience this country.
I came across this car by the side of the road, slowly rusting away and with cactus growing through it.
Posted by Unknown at 15:20
Email ThisBlogThis!Share to TwitterShare to FacebookShare to Pinterest