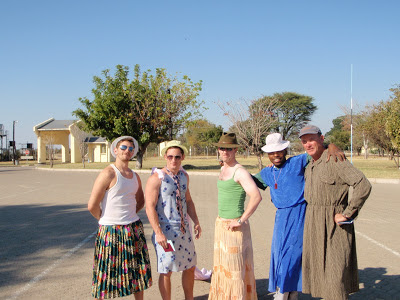 
Five of us stood in the international buffer zone that exists between two countries. This particular border happened to be the Namibia- Botswana one and the sun was beating down relentlessly.

All eyes were on myself and the other members of my group. Was this a good idea my brain kept telling me?

The reason why we were receiving stares from a group of older tourists and a toothless old lady with a bundle on her head was because of what we were wearing.

It had seemed like a good idea at the time the night before in the bar, but now we were scared we wouldn’t be able to enter Botswana and we would be stuck in the fenced area between two countries.

The reason for this fret and last minute panic was that all five of us who had met on the bus and decided to get rather drunk the night before were dressed head to toe in drag!

The Namibian authorities had let us out of the country and stamped our passports with haste and even sent us on our way with a few free condoms.
But entering Botswana was another matter.

At first we were in high spirits and the local children were pointing and giggling at us. We had played along by striking poses and it was a fun, jovial atmosphere.

That all ended when we met the machine gun toting border officials. They stood there with deadpan faces, which we took for being menacing.

We wished we could run back to our overland truck and quickly get changed, but that was in another part of the compound being searched, probably because of what we were wearing.

The queue advanced. My heart was pounding.


The border official took my dog-eared passport from me with some hesitation; he stared at the picture for what seemed an age. My heart was pounding in my chest. The seconds ticked by.

Then a broad smile opened revealing a huge set of gold teeth as he smacked the stamp down creating a massive bang that make the person in the queue behind me jump.

“Your very good looking for a man”, he said. Then sent us on our way. 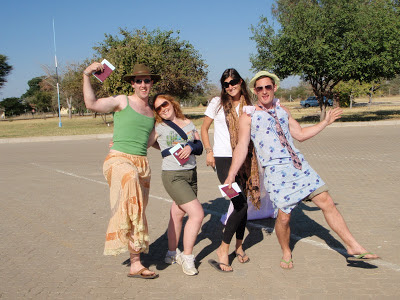 Posted by Unknown at 06:24
Email ThisBlogThis!Share to TwitterShare to FacebookShare to Pinterest