Danger on the Volta 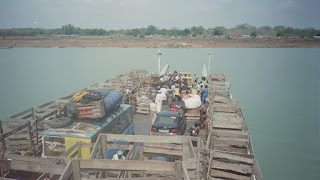 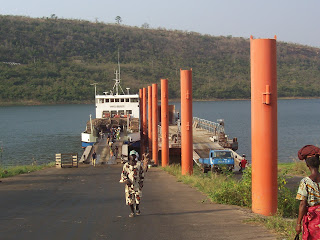 Veteran traveler Ben Whateley-Harris embarks on a journey on Africa’s largest man-made lake, but discovers all is not plain sailing


I had been volunteering in Ghana for six months, working in a school in the central region, in 2006, and thought I was fully acclimatized. During the holidays I set off to the Volta Region in search of excitement: I planned to catch a ferry up Lake Volta, Africa’s largest man-made lake. Arriving one hot day in February. I am sweaty after a long journey from my school in a village, miles from anywhere via the capital city of Accra. I come across a beautiful village with straw roofed huts by the side of the river. The water lapped on the shore and the scene seemed idyllic.Suddenly I hear a cry of 'Money'. I turn round to see group of half-naked children approaching. They pester me for money and run their hands through my hair, trying to grab everything they can, hands, feet and even ears. I have to escape and give these cheeky little blighters the slip as they are beginning to latch onto me with gouging fingernails, grabbing my bag and tugging at my clothes.

They come at me with a vengeance and soon I have to scramble over a small wall and up a steep palm-infested slope to get back on to the safety of the road. I would have loved to have seen the passing bus driver’s face as an Obroni (whiteman) came hurtling out of the undergrowth clutching a bag and looking bedraggled with his hair in a bandana.I arrive early at Akosombo port, full of excitement for the journey that lies ahead. I am fully expecting to see a large ferry crowded with people and goods at the dockside, but there is no sign of a single boat at all. There is nothing to do at the port except wait and queue for tickets. I Finally after four hours, I manage to buy a second-class ticket. First class entitles you to a cabin but I fancy the idea of sleeping in the breeze out on deck. Ticket in hand I wait for the ferry to turn up. It eventually does after I have devoured some deliciously greasy street food. I have waited 11 hours in the sun with goats surrounding me and I stand out like a thumb, the only non-Ghanaian. The docks become a mass of activity. People load massive wooden crates with yams and fruits. Cars are driven down on to the landing deck. Forklift trucks move large objects too and fro.

I am struck by the number of people; there are hundreds of them, all milling about, many balancing large bundles of clothing and food tightly wrapped up in colourful clothes on their heads. The ferry has finally arrived, a large rusty hulk called the
Yapei Queen, that desperately needs a lick of paint. It seems to me that there are far too
many people and cargo for such a small and rusty old boat. Everything is basically thrown on to the deck. Soon the crates are piled high and some people are sleeping in them. The gangway is opened and the passengers along with me get on board. I walk up to the higher decks through the 3rd class area - a hot and fume-filled hollow under the boat where hundreds of people cram in and try to find some floor space to sprawl out on. All I can see is a mass of bodies crammed together moving like a giant storm; the smell, along with the immense heat almost knocks me down. Luckily I manage to get out and climb the deck to the second-class area to refresh myself with the breeze hitting my face through an open window.This area is pretty much the same in terms of cleanliness and I notice that the lifejackets are dated 1983 and the instruction poster on the wall has a man with the best mullet ever on it.

I walk straight out onto the deck and manage to find somewhere to sit. The loud hailer sounds booming out down the lake alerting the other passengers, the ferry turns round and sets off on what will become a memorable trip up the Volta River.
Soon we are sailing at full steam ahead. At this point I have already argued with a Ghanaian Army sergeant. He stole the mattress that I raced to get when they were being given out. The captain of the ferry soon appears; he is wearing a bright orange boiler suit like they do in American jails. In the morning we stop numerous times in isolated areas with nothing but sand and rocks lining the banks of the river. Once or twice a small thatched hut with a pen full of bleating goats lined the shore. People appear out of the bushes and load up the ferry with fruits and all sorts of boxes containing unknown treasures.I love watching as the ferry waits and the people on shore wade out to climb aboard; some women did this with babies strapped to their backs with a brightly coloured cloth which is the West African fashion. I love the fact that even though the ferry does not boom out its massive foghorn, people came from out of nowhere at the right time to trade, load, and buy and also to board.

Eventually after almost 27 hours on board, the Yapei Queen arrives at the town of Yeji where there are masses of people and hubbub and noise on the crowded shore. A ferry called the Nana Besemuna has broken down and is still on the landing bay/pathway that runs down into the water. Instead of finding another area to moor up what do the geniuses on board our ferry decide to do? Yes you have guessed it. They ram the Nana Besemuna in the hope of dislodging her from the moorings and taking her unloading place.People are still on the decks of both ferries and they are running for cover as our ferry hurtles towards the other boat. Like one giant game of bumper cars. I stand in shock on deck thinking that this cannot be happening. No one could be that reckless that they would intentionally risk sinking an entire cargo ferry and put the lives of all on board in danger. The front of our boat hits the other ferry with such a force that I almost fall over. Many crates fall from their high perched places causing screams and people to run for cover.
The front part of our boat hits the protruding corrugated iron roofing that sticks out over one of the decks. When it does, it makes an ear splitting-screech, a sound akin to someone running fingernails down a blackboard. Great lumps of iron shoot up in to the air; this was followed by a large hollow metal thud as the two hulks collide.


People jump overboard into the deep waters and men, women and children are on deck all screaming in panic at the captain and crew. The crew rush around like headless chickens and no one has a clue about what they are doing. It can only be described as mayhem.
The corrugated iron roofing buckles under the weight and pressure and shoots up into the air. A funnel billowing white wispy smoke is knocked off the deck like a skittle being hit by a bowling ball. It falls on to the deck with a loud clag that makes many jump and small children cry.The front of the Yapei Queen screeches and scrapes all along the side of the other ferry. Now I am no sailor, or nautical expert and never, I hasten to add, will be, but what this chaotic bunch are doing is just plain and simply shear folly. If cereal packets give out sailing qualifications as the free gift, I am sure this crew would gain their seas badges that way.

The trail of carnage and damage that the two ferries leave is ridiculous and must be very costly. While the ferry continues to back up and then re-ram the Nana Besemuna another moment of brilliance occurs.

As we rammed the other ferry, the large wooden crates and boxes on the deck tumble down and smash. People instantly seek refuge in the crammed area below deck and then the forklift truck driver decides in his wisdom to start up and rearrange the crates on the ground. He does a three point turn and narrowly avoids running over a woman with a baby strapped to her back. The deck is still full of people, so this forklift is a nuisance and a danger because he can easily crush someone.
I have to pull a small child away from almost getting run over and then I bellow at the driver telling him in the most undignified English that I could muster what a fool he is. I am not the only one shouting at him; others are screaming too but in a language I cannot understand.Eventually the Yapei Queen’s ramming only succeeds in making the poor battle scarred Nana Besemuna become firmly wedged in the mud banks. They don’t even manage to get her off the runway. So they decide to finally do the sensible thing and moor up on the mud banks and lower the front of the ferry into the water. Why couldn’t they have done this in the first place?Along with countless others I jump down into the water and wade waist high to get to the shore. I wonder how the cars and tro tros (mini buses) on board manage to get off. I finally step through the reeds and onto the bank glad to have my feet on dry land.

The scene of utter chaos continues. Somewhere in the depths of the Yapei Queen the ramming has caused a fire and a man runs along the deck clutching an aging extinguisher.

Looking at the mayhem a large smile creeps across my face; nothing is ever simple. I think, if I am honest, I wouldn’t ever have it any other way. Drenched to the bone and leaving wet footprints, I set off in search of another adventure.
Posted by Unknown at 01:22
Email ThisBlogThis!Share to TwitterShare to FacebookShare to Pinterest