When I travel I have always brought home a few trinkets.
Spears, carvings, glass wear and ornaments adorn the walls and shelves of my house.
But my true passion is masks. I have collected over 30 from all over Africa and some from South East Asia.

It first started when I visited Ghana in 2005. There were mask sellers everywhere in the capital city Accra. Hundreds of sellers tried to flog you there wares in the arts markets and stalls were laden with masks all looking the same as if they had rolled of a carving production line.

However when you got off the tourists trail and disappeared into area of the country where not many 'Obroni's' (white men) went you stumbled across absolute gems of masks in the remotest places.

I first bought one and have not stopped since.
Here are ten of my favorites.

Zanzibar
I bought this mask from a seller in Stone town. He had many of the same and it seemed to be the only mask available on the island. Although it is not old or unique is is quite cheeky and has earrings the only mask I have that does so.

Chaing Mai, Thailand
In 2007 I found my self in Northern Thailand. While there I visited many of the Wats and temples that fill the city. Visiting Wat Chiang Mai, Wat Phrathat Doi Suthep and Wat Pra Singh to name but a few.
When I was in one of them  I saw a sign saying 'Monk chat'. This was where you could speak tot he Monks in English to help them with their language skills. I had many questions about Thai Buddhism I wanted to ask but all the young monks wanted to know about was Manchester United! When I was leaving there was a little trestle table set up selling some dog eared books and a few incense sticks. But next to that was this little gem which I bought without hesitation for 100 Baht. It reminds me of the 'Mighty boosh' logo and I have never seen another one like it.


Java, Indonesia
As far as I know this is the only mask that I have which is blessed. I bought it off a wheelchair bound old man with whiskers who carved them in his garden. I was at a Maduran festival in the outskirts of Malang a city in Est Java in 2006.
The old man I bought it off said that It can never touch the ground and if I put it on the ground and walk over it something bad will happen to me. Naturally this has never come off the shelf where it lives.

This mask can be found everywhere. In shops in London, boutiques in Cape town or a stall by a waterfall in Kpandu int he Volta region where I found this one.
The reason I bought this mask is because everyone I saw was painted in bright colours. This was the only unpainted and plain one. Therefore I instantly liked it and purchased it off a woman with no teeth but a brilliant smile. 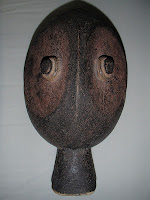 I did not see much of Joburg to be honest. I had booked into a hostel which turned out to be a fortified compound outside the city and in the middle of nowhere. I did however find a stall selling masks and I wanted to get rid of some of the smaller Rand notes which I was carrying.
This mask has two long tentacles that fit into the top and protrude out. One white and one red, unfortunately they have fallen behind a bookcase and I have not got round to moving the entire thing to get them out yet.
This is my biggest mask and has something duck like about it as the bottom section opens up to look like a beak.

This mask is the most evil looking one that I have. Normally I go for ones that look slightly comical. But this one has a row of jagged teeth and a pointed nose that adds something dark to its persona.

This one I know for sure is quite old and probably the oldest of all the masks I have. 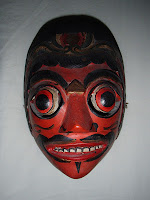 I was rummaging around in a back street junk shop in Malang in Java when Ia came across this one. The man in the shop didn't care about haggling or even if I was there at all. He said it was old and it was rubbish from a time long ago.

I liked the bright colours and once I had dusted off the years of grime it shone bright again. 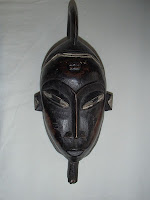 
I know this mask is old, but not as old as my Livingstone mask. I bought it in Botswana in 2008 after I found it inside an old chest.
It was covered in dust and the man selling it didn't seem to realize he had it as he kept trying to flog me spears and axes. 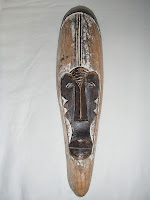 Normally this shape of mask is another example of colour. Everyone is bright and the sellers seem to be out painting each other to sell their wares. Unlike this one though which I found near the Burkina Faso border. It was dusty and weather beaten but exactly what I wanted. 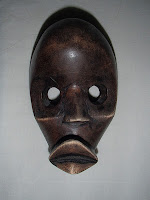 This mask is tiny, one of the smallest I own. But it has character  Open eyes that seem to be pleading and lips that are worn at the edges. I am not sure why but it always makes me smile.


Posted by Unknown at 13:30
Email ThisBlogThis!Share to TwitterShare to FacebookShare to Pinterest