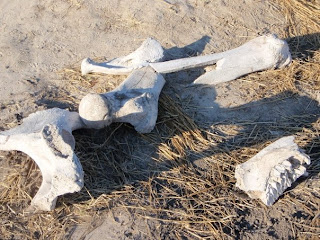 
We set out from the bush camp deep into Botswana’s Okavango Delta to try and see some of Africa’s bountiful wildlife. The sun beat down on my shoulders and the dust filled my nostrils as our walking boot clad feet slowly and quietly plodded on.

I had only been in Botswana a few days having arrived overland from Namibia and already was way off the beaten track deep in the swamplands having arrived by hollowed out mokoro canoes.

I was with a small group of people as we set off with our local guide Free. Free must have been in his late fifties, the typical African bushman, thick accent, bare calloused feet and a deeply lined face. His eyes were small and squinting, an occupational hazard from constantly peering at the sun to track our direction.

We all stopped and peered round some bushes, for in the distance we could see two large elephants with birds in abundance standing on their bulking backs. By this time on my African trip I had seen many elephants and really wasn’t too bothered about them. I longed to see wildebeest up close and personal.

Onwards we trod, the dust sometimes clouding all round us. Free would stop us at random points, sniff the air and point with his little stick in the direction of a bush. Then as we watched nothing would happen. After stumbling across the elephants I was beginning to believe that Free didn’t have a clue what he was doing or where he was going!

The sun in Botswana is so piecing that it’s like knives sticking in your skin and twisting, by this time it was at its most powerful and we had entered a clearing with no shade to hide from the relentless heat.

Free must have stopped a dozen times and pointed with his magic wand, but no matter how hard we peered around us we could see nothing apart from the occasional flock or birds in the sky.

Only the elephant skeleton gave us some respite from visually searching the undergrowth and the horizon. The sun bleached bones heavy in my hands.

The group I was with were now all starting to moan and fret about the lack of animals that we had seen today. Everyone was annoyed with our guide who was being called words such as inept and useless.

At this time my mind was wandering to other aspects of my trip. Places seen and places yet to be seen. I was lost in my own world and oblivious to the others around me.

I started to play with the plants and was whittling down a stick into a rudimentary spear all the while having fallen back from the main group.
I whittled and ambled after the trudging group, and then something happened to make my heart skip a beat before going into overdrive and taking 5 years off my life.

I had stumbled only ten yards away from a lion and lioness. The two massive beasts lay on the ground with their heads upwards looking in my direction. .

I was frozen to the spot thinking that any moment those massive teeth and claws would rip me open and pull out my innards. As I waited for the impending attack, nothing happened.

My heart was going like the clappers and I could hear it ringing in my ears. Time had frozen as the lions stirred and kept perfect eye contact with me.

I remember being told what to do if you encounter animals in Africa. Zig zag away if an elephant charges and climb a tree is a wildebeest comes at you. The advice for a lion is stand your ground. If truth be told I was rooted to the spot with fear and could do nothing but stand still.

A giant roar erupted from the female and in a flash of fur and undergrowth they were gone. I exhaled loudly and turned to see the group staring at me. I was the only one who had seen the lions.

We made our way back to the bushcamp with people still moaning about Free. All the time I regaled them with stories of the lions and how majestic they look. The sun was setting over the Okavango Delta and the noises of nocturnal animals stirring were echoing in the darkening sky.

That night we sat around the campfire and I couldn’t bring myself to say just how scared I had been when face to face with one of natures most feared.