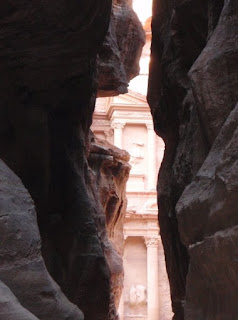 For centuries shrouded in secrecy, now open to all, Petra has remained one of the true wonders of the world. Ben Whateley-Harris walks in his father’s footsteps to discover the beauty of the rose coloured city
The ancient entrance to Petra is down a long channel deep in the rock known as the Siq. Easy to defend in times gone, it is now a walkway where tourists dodge carriages, and silver sellers wave from every nook and cranny. The morning sun is rising chasing the shadows away for the day; in their place you see every shade of red from rust to the brightest pink embedded in the rock.

The air feels chilly and people around me are still in fleeces and hats, but those in the know are already stripping off for the walk to the first awesome sight. The Siq twists and turns and shadows engulf at certain points; the noise of horse drawn carriages carrying older tourists echoes and reverberates down the channel. The tension builds and soon the anticipation is too much for me to take, I start to run.

For me this is not just a trip to Jordan and the Middle East; it is a personal homage and journey into my past. My late father came to Petra many years ago. To say he loved the place was an understatement. He adored every inch of this historical masterpiece. For me this trip has deeper meaning. I want to re-trace his footsteps and see with my own eyes why Petra stole his heart.

The first Whiteman to enter Petra was Swiss Johan Ludwig Bruckhardt in 1812, disguised as a Bedouin. He spent two years previous, in Syria, learning Arabic and converting to Islam. One day he heard locals talking about fantastic ruins hidden in the desert and decided to set out to find them. In full Bedouin attire he managed to sketch the ancient monuments and record a log of his trip, the first ever by western eyes. Unfortunately Bruckhardt contracted dysentery, and died in 1817. He was only 33.

Bruckhardt’s day is a long way from modern Petra. Gaggles of tourists pour into the city and clog the Siq; tour groups following umbrellas are a common sight and I wonder what the place would be like if I had it to myself.
I run to get in front of the crowds (Japanese groups with matching backpacks and white gloves). I just want to get there first, to see the place un-spoilt by tourists. I am not alone though; my younger half brother Tom has come with me and we tear down the Siq arriving at the opening.

Manoeuvring past a camel, I finally come face to face with the Treasury (Al-Kazneh), as the Siq opens up revealing what many know as the Holy Grail’s final resting place in the Indiana Jones Film the Last Crusade. To others it is the Treasury, carved into the rock by the Nabatean race from the 6th Century BC.

Many people think that this is all Petra has to offer, but the Treasury is only the tip of the iceberg. The entire city is a treasure-trove of tombs, amphitheatres and ornate buildings, all hewn from the rock face.

The Treasury stands in front of my brother and I, looming down on us looking weather beaten yet still powerful and royal, like an ageing screen goddess who refuses to succumb to time. By this time the sun is at its hottest and we have taken far too many photos. The crowds still pour from the Siq. Breaking into sweats after the sanctuary of their air conditioned tour buses.

We decide to move on but my brother hasn’t been well on this trip; what started out as the typical holiday stomach ended up as food poisoning. For him standing up without having the urge to run for the nearest convenience is a real effort. Running down the Siq hadn’t done much to ease his stomach, so I have to abandon him in the toilets. I want to wait but he insists that I go on and that he’ll catch me up.

My first port of call is the amphitheatre, which is cordoned off; the only way to get a view is to the climb up to the royal tombs and look down from above. The tombs are perched up high on the valley, looking down on Petra’s Bedouin trinket sellers. Some are almost

inaccessible, but with a small jump and some good balance I clamber up and into them. I wouldn’t recommend it though, as many are used as communal toilets. Imagine climbing in the heat up to an ornate tomb to be greeted with someone’s best deposit.

Next I decide to trek the supposed 800 steps up to the hillside to the monastery. I stand high up looking out for my brother but can’t see him and assume that he is still studying the rock formations of the toilet ceiling.

I walk past colonnaded streets, pausing to peruse the trinket stalls manned by mustachioed men, women with toothless grins and children who hide behind their mothers peering round at you with wide eyes and broad grins. A timeless image that my father must have seen.

I don my straw trilby and feel every inch the explorer. All I have to do is ignore the camel riding Americans and the coffee shops with Coca-cola banners outside and I could have been transported back to Bruckhardt’s time. The climb up to the monastery isn’t as daunting as it is made out to be; I pass donkey trains and waving children. Pathways lead off the main track to smaller tombs; the temple of the winged Lion is one such gem and regularly missed out by passers by.

Then in a cloud of dust out of nowhere Tom rounds a corner in the path on a donkey, wearing a cheeky grin on his face and an Arabic scarf around his neck. I stare in amazement and disbelief, as he is far too large for the small donkey; I laugh loudly sending an echo into the valley.

Tom introduces me to Monica. He tells me he assumed that I would go gun-ho up to the monastery, so he hired a donkey and set off, because if he sat down his bottom leakage problems eased off. Now he is on his way down and says that it isn’t much further. Tom soon disappears down the track shouting ‘I am Tommy of Arabia’; his shouts fade and the echoes die down.

I am left with the children selling rocks from a dusty tray looking at me with large eyes and dirty fingernails, I am drawn in and have to buy three of them from a little girl dressed in a superman t-shirt.


Towering above me casting a shadow over the scorching red sands, stands what many people call the monastery or as the local Bedouin population refer to as Ad-Deir. The shear size and scale of the monastery cannot be described; I ask myself ‘How did they make this’?

Standing next to the monastery I feel insignificant; I cannot fit it into a photo unless I walk a few hundred meters backwards. I feel dumbstruck and completely in awe of what I am witnessing. I now know how my father felt and puzzled how Bruckhardt hadn’t given himself away when seeing this sight.

I sit for a while sipping coffee from a Bedouin vendor when a noise and commotion start up; people are looking and pointing with disbelief. I put on my sunglasses and follow their line of vision. There, high up on the roof of the monastery is a lone figure. The gasps grow louder as he clambers over the edge and soon is traversing his way around the ledges. My heart is in my mouth; I didn’t want to look but can’t turn away.


Once the idiot had traversed the entire roof and climbed back down, I feel enraged that someone would climb on a world heritage site and by doing so encourage others to dice with death. The Bedouin coffee vendor tells me that eight years ago an American tourist had fallen to her death.

It seems to me that Petra is at risk of being loved to death. So many tourists file through the Siq everyday, touching the carvings, wearing away the mountain footpaths and generally being messy and inconsiderate.

I leave Petra through the Siq as the sun sets in the distance. I imagine Bruckhardt leaving for the first time and smile to myself thinking that tourists wouldn’t have surrounded him. The curtain is coming down on my Petra experience. The world retreats into the shadows once more; the red colours fade and are swallowed in the Siq. Now, I have to find my poor afflicted little brother.

Place - Petra, Jordan
Posted by Unknown at 05:55
Email ThisBlogThis!Share to TwitterShare to FacebookShare to Pinterest