The Little Mermaid of Copenhagen 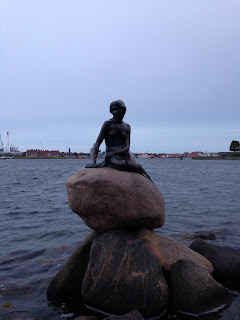 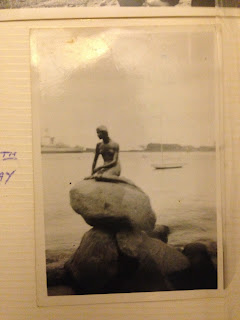 You cannot go to Copenhagen the Danish capital without seeing the famous little mermaid Statue.
I remember my late grandfather telling me about the wonders of hitch hiking through Europe in 1951. He said the Swedish women were beautiful but the place he most raved and waxed lyrical about was Denmark; especially Copenhagen.
My grandfather would tell me tales of the wonders of Tivoli Gardens, the amusement park. Coming from war torn and rationed London the lights of the park would have seemed like a million miles away.
He would be used to places like Southend on sea but this spectacle of lights, fireworks, water parks, gardens and amusements would have been a whole new experience.
I found an old photo that he took of the little Mermaid statue.
A small black and white snap taken from an angle on a sunny day 66 years ago. Now I found myself standing at that very spot where he took that photo.
A smile creeps across my face as I think of him as a young man and wonder how similar we would be.
It’s May 2015 and early evening.
It’s still light and the tide has gone out. I was always told that you will be underwhelmed by the statue and that it was smaller than what you expected. But what I didn’t realise was that if I stand on the band and jump I can literally clamber up ad stand next to her. 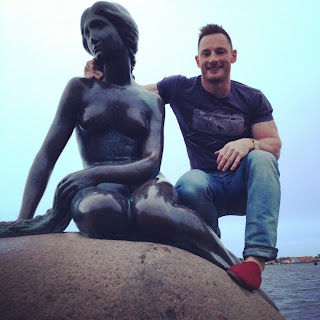 This of course is probably illegal as she has been vandalised in the past and in 2003 almost exactly 90 years after when was placed there she was blown off her rock with explosives!
Her head has been sawn off and she has also in the past been draped in a Burkha. So the poor lass has gone through the wars.
Anyway I couldn’t resist and clambered up on to her. The first thing I noticed was how well rubbed her breasts were, obviously it was either overzealous sexually frustrated tourists having a grope or good luck to rub them like it is with the Churchill bronze statue rubbing his foot as you enter parliament.
Either way I was up there now and gave her a little kiss for good luck. Not a passionate one of course just a peck.
I stood on the shore again looking out at the waters of Copenhagen.
A city that is beautiful and great fun to cycle round.
The Mermaid fitted perfectly. The fairy-tale creature created by Hans Christian Andersen and the statue commissioned by the son of the founder of Carlsberg. It’s an amusing story.
The head is modelled on ballerina Ellen Price's, but she refused to go nude for the body so that task fell to the sculptor’s wife.
So since 1913 her breasts have been in the sea. Recently Danish authorities have considered moving her further out into the bay to discourage people like myself from climbing on to it. But nothing has happened yet. I do however know a certain Australian man who swam out to her and posed naked in the same position as her. The photo does make silly viewing if unflattering for him.
I stared at her for a further minute until some tourists came along and ruined the view and the quietness. Therefore I moved off to see the kitsch and lights of Tivoli gardens and see what my granddad loved about it.
To me it was just a theme park with beautiful ornate entrances that dated from Victorian times. But to him this must have been like visiting Santa's Grotto. I smiled as I entered and saw the Peacock stage. Being here I know would have made him smile. Maybe travel was in his blood too. I certainly hope so.
As I left Copenhagen I heard a story about the mermaid that I wish I had seen. An act of Vandalism connected to international women’s day in 2006 left her clutching a whopping Dildo.
I will leave you with that mental image.

Posted by Unknown at 15:09
Email ThisBlogThis!Share to TwitterShare to FacebookShare to Pinterest