Transfixed by the flames 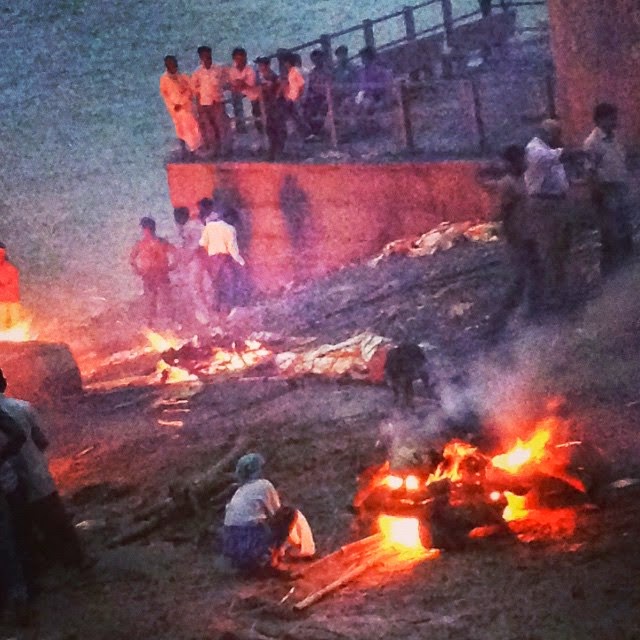 I sat in the fading light transfixed by what was happening in front of me.

My eyes must have shone with the reflective powers of the burning fires.


The heat from the blaze kept the flies away but not the stray dogs, goats and lumbering bony cows that wander past or deposit themselves on the ground haphazardly next to you.


What I was watching was a melting pot of emotions and reasoning. The fact of the matter was though that I could not turn my eyes from the fires or even contemplate leaving.

I sat on a concrete step next to a quizzical looking goat and stared into the flames.

These flames in particular were on the banks of the sacred Ganges River in the city of Varanasi.
Varanasi in Uttar Pradesh is the Holiest city on the Ganges and also possibly one of the most polluted.

Once you are away from the city centre and the madness that are Indian roads you are struck by a relative serenity by the banks of the sacred river.

The Ganges flow along and every inch of the way stone steps lead down into its waters so that Hindu’s can perform a Puju where they rinse themselves and carry out early morning ablutions.

I on the other hand dipped a hand and feet into the waters as in many places it is riddled with excrement, rubbish and floating goats corpses. This however does not perturb many from drinking the waters as they are said to have healing powers.

The stone ghats look in places majestic, rustic and almost quintessentially like a piece of Victorian England with an added Eastern feel.

However two Ghats stand out from the others. For one striking reason.

These are funeral Ghats. Harishchandra and Manikarnika Ghats are the two places in the city where bodies are cremated on the banks of the river 24 hours a day.

They are easy to spot with the constant stream of smoke rising and the gaggle of people milling around.

You at first cannot stand and watch without people claiming to own the place or work there and demanding money. After a while of stern ‘bugger offs’ you are left in peace and can sit with the locals and watch the funerals.

It may sound morbid and even disgusting to some but I was lost in the flames of death.

Manikarnika Ghat is the larger of the two with several funeral pyres burning all at once. This is exclusively for Hindu’s and is incredibly crowded with people, cows, dogs and boats galore.

Harishchandra Ghat is a little smaller and there you can sit without too much hassle and watch the proceedings.

What I learnt was interesting and eye opening on Indian culture.

A leprosy sufferer (you have suffered enough and are therefore pure)

These people are considered pure and are therefore not burnt.

They are wrapped in cloth, tied to a stone and taken out into the Ganges in front of the Ghat and dumped into the river.

I watched as a woman wrapped in orange and gold was rowed out about 100 yards where she was tipped head first with a plop into the river. I also saw a small baby wrapped in white (white for males) then covered in red henna.

He was rowed out a little way where two children unceremoniously dropped him over the side. No prayers, no ritual, just another part of life.

I sat looking at the flames as five bodies burnt at the Harishchandra Ghat. My mind was blank as I soaked up the atmosphere like a sponge.

I watched as bodies were carried out and placed on the pyres.

Then it’s on the pyre where logs are piled up high on top.

India has a caste system where you are born into your class. This can dictate what jobs and place in society you have.

Therefore the higher up the ladder you are the further from the river bank you are. If you are a Maharaja for example you can be cremated on a giant plinth that remained at this time empty.

One pyre was so close to the river that the little ripples lapped at the logs.

The one I sat directly looking at was further up and therefore this person was from a higher caste.

The man wrapped in white cloth was covered in logs and a fire was set underneath.

The twigs and kindling crackles and soon the fire had set hold.

I was mesmerised watching it. In a morbid fascination sort of way but also in a cultural understanding way.
I sat for ages watching as at first the cloth burnt away revealing a hollow face where the skin had melted. A skeletal arm fell from the fire and was soon prodded back by a stick and soon you heard a pop and guts fell from the side into the fire and instantly changed colour.

All the while the feet remained intact and unaffected. Protruding out of the pyre. As the body started to collapse into itself the feet became blistered and blackened and then disappeared into the flames.

All the while goats wandered and nibbled at rubbish and the embers of pyres that had burnt out.
People sifted through the ashes looking for gold teeth or jewellery.

The entire experience was emotionless. Only once did I see one can start to cry and we was swiftly taken away.

It is a part of life. One that may make people’s eye open wider and other hurry away from the scene.
But for me I felt I had seen a part of Indian culture and life that many people who pass through would never see.

I sat until the embers were black and the smoke from the other pyres hurt my eyes.

I left feeling peaceful and having a new perspective on mortality.
Posted by Unknown at 08:48
Email ThisBlogThis!Share to TwitterShare to FacebookShare to Pinterest