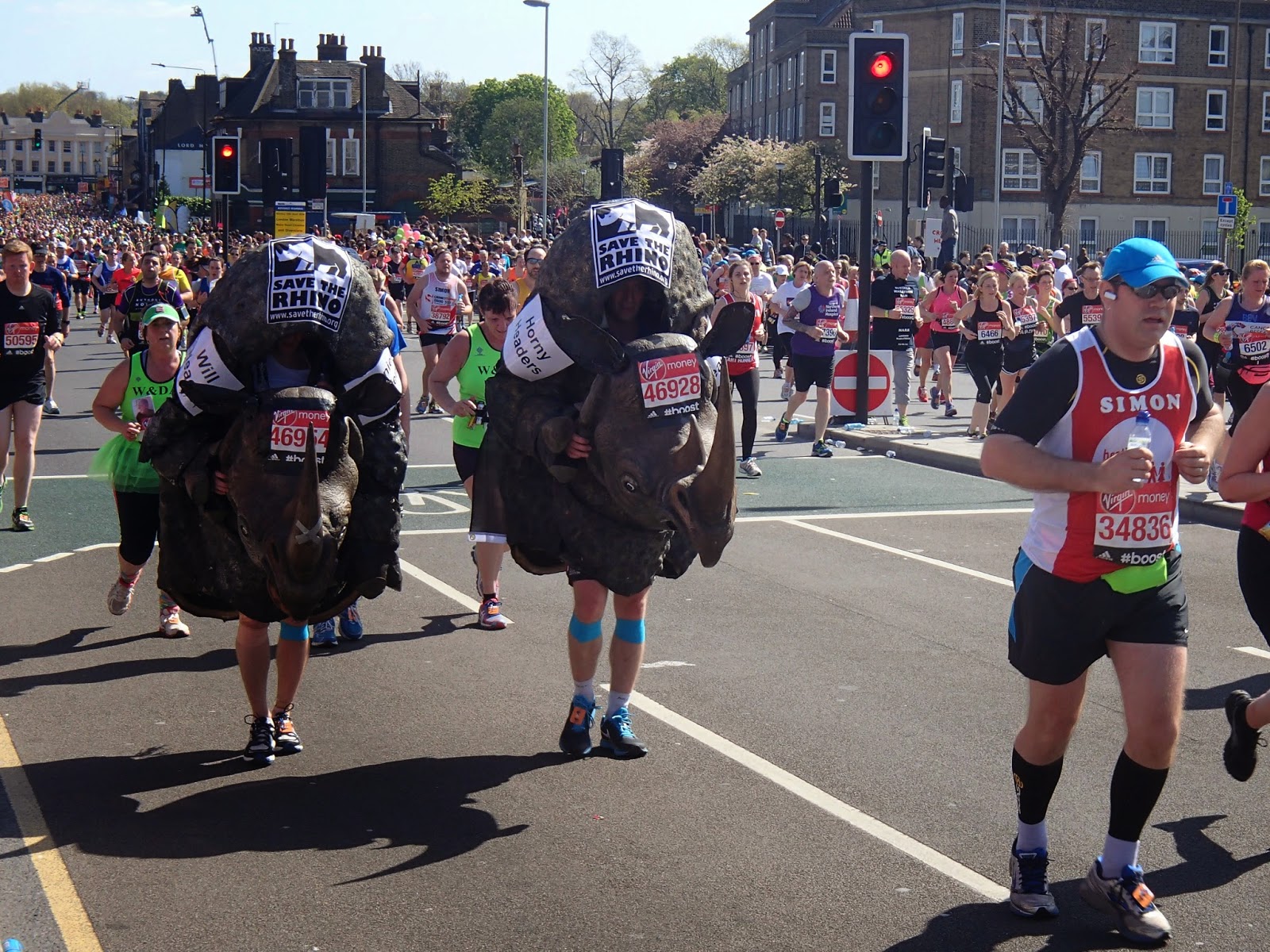 On Sunday I joined thousands of cheering people standing in the London sun shouting encouragement as some of the 36,000 people ran by.

Of course it was marathon Sunday and the sun shone down brightening everyone's spirits.

Some people looked utterly dejected as they ran past us just before mile 18 while others looked fresh as a daisy. 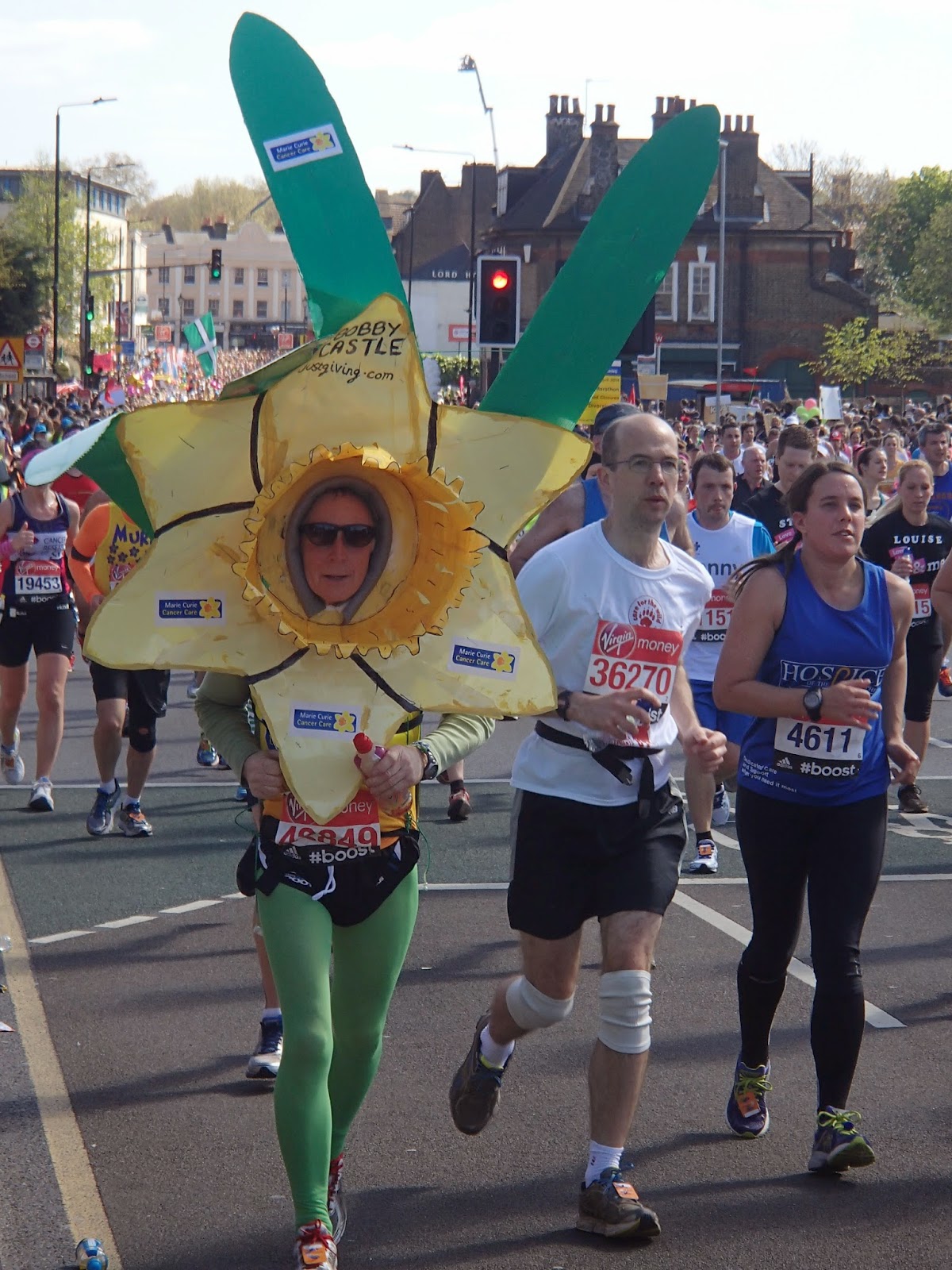 It was as if for one day only London has re-discovered her Olympic spirit and everyone chatted, sang and laughed together using sport as the background.

The day started off well. While I was getting told off by a policeman for standing on top of a bin I saw Mo Farah storm past.

Then the group I was with walked a little further up from Greenwich and soon we saw our friends running past. Or rather they spotted us before we could spot them.

We shouted to people who looked like they were struggling and screamed the names of those with it adorning their vests.

People waved and smiles were seen all around as the sun shone down.

It made me think back to a long, long time ago when I was just a small pup of a man. In 2003 while at university we decided to run the marathon for our RAG charity and somehow after not too much training I found myself on the start line.

Suddenly as I was running in a daze of colour, sounds, music and fun I was shocked to see that I was at the 15 mile marker.

My legs held out until about mile 22 when it felt like I was running on borrowed second hand legs that didn't quite work properly.

I was happy that apart from only stopping to use the conveniences I kept plodding along at a steady pace.

Once I crossed that finishing line my legs stopped working altogether and the next two days stairs were my Everest challenge.

That medal I received and my sub 5 hour run are two of my proudest memories.

As I lent on the railings watching people in rhino costumes, bagpus suits and all sorts of fun fancy dress run past I thought back to my time doing it and a smile crept across my face.

I sipped a little of my beer as the sun beat down on my back and a plan started to grow and develope in my mind.

Next year I will run it again.

But this time in fancy dress.

We left our perch and headed off again following the iPhone tracker to catch our friends.

Once again I was leaning on a railing scanning the crowd a little later along and suddenly there they were in front of me. Looking fresh and excited as they came to within 8 miles of finishing. 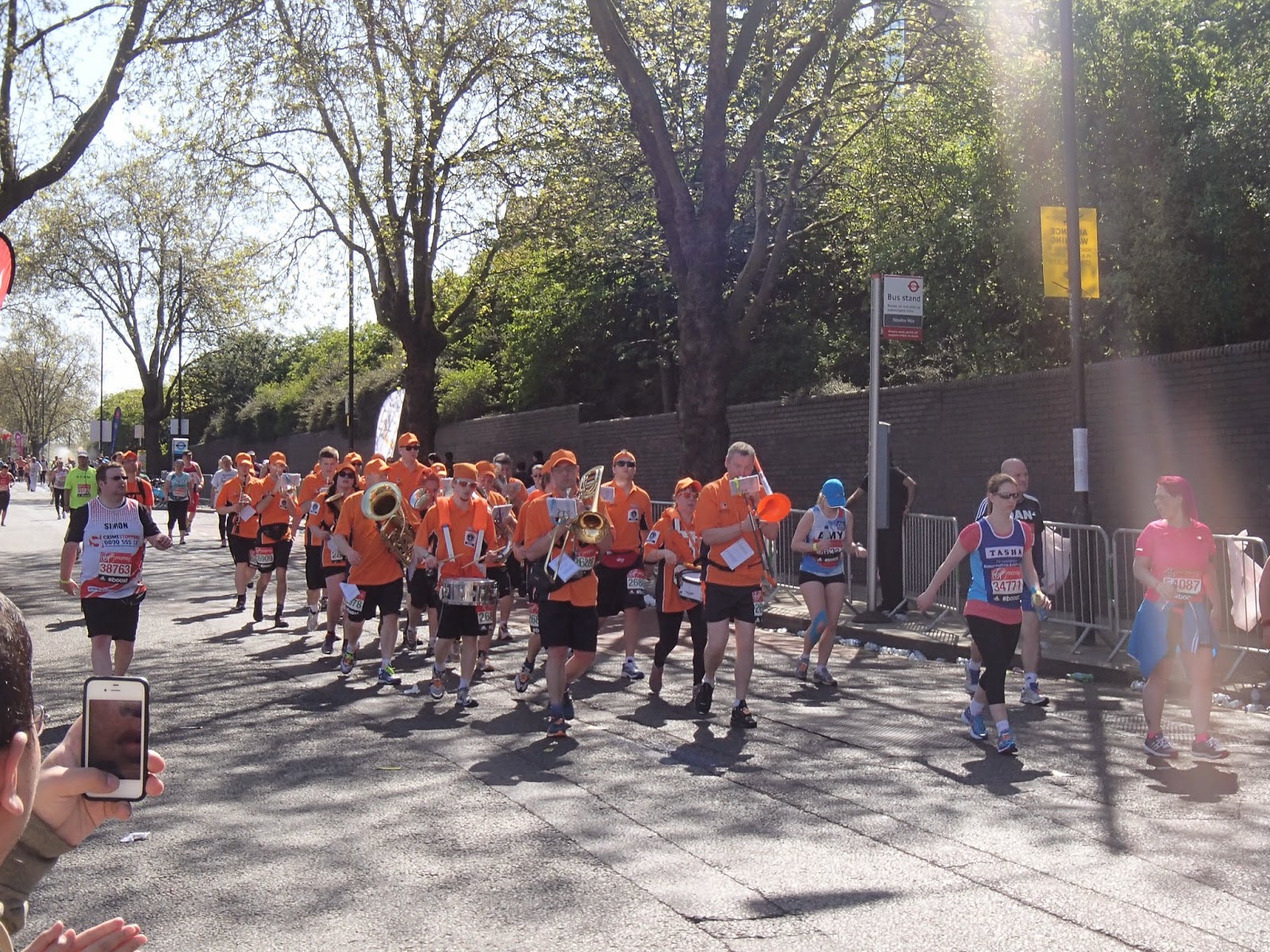 You can see the faces of the people you know light up when they see a familiar face. 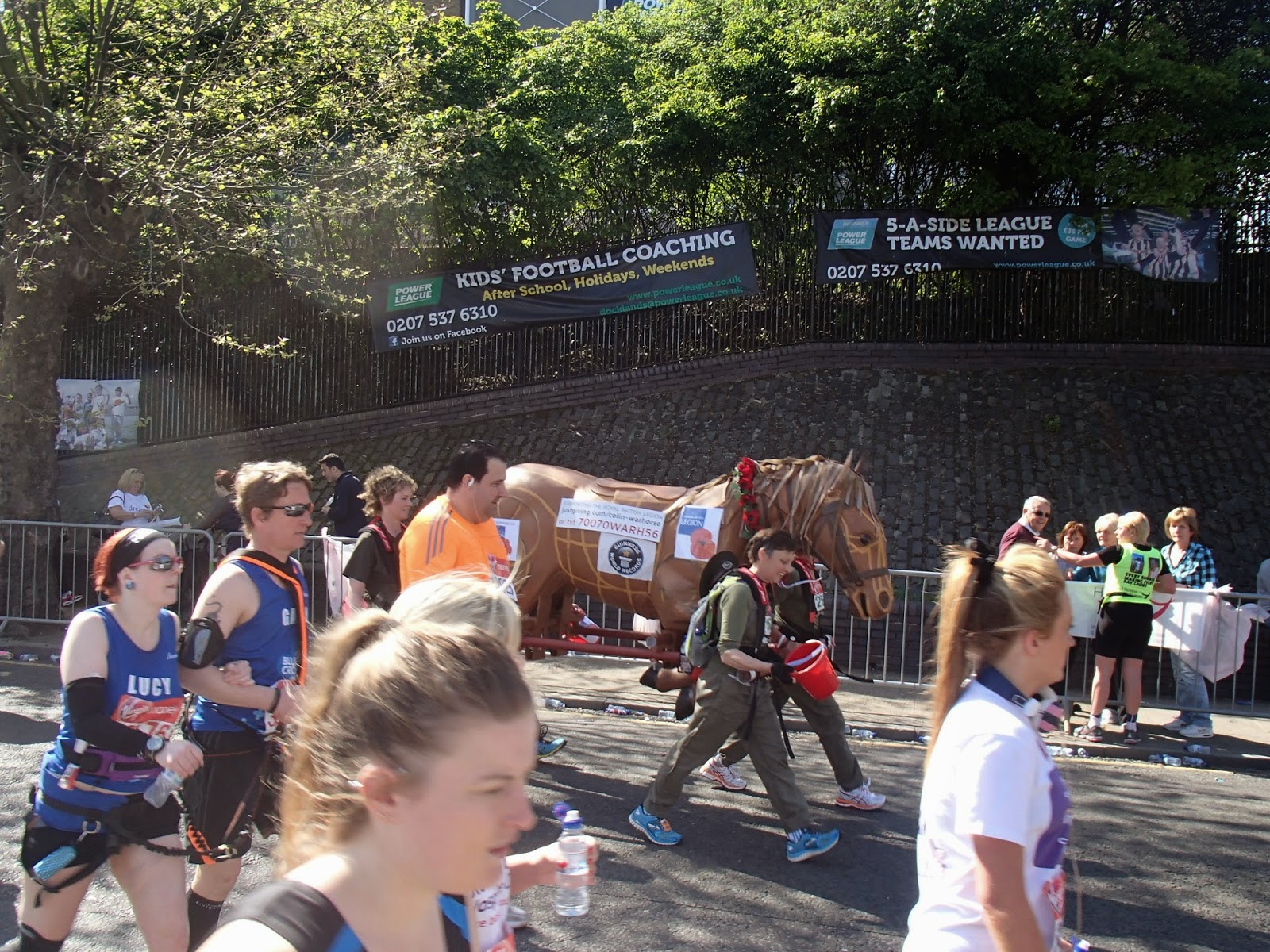 Also when you shout at a complete stranger some
encouragement you see them acknowledge you and some even regain a stpring in their step as they wave at you.

Many stop walking and carry on running after a few words of encouragement and many start to give the crowd high fives. 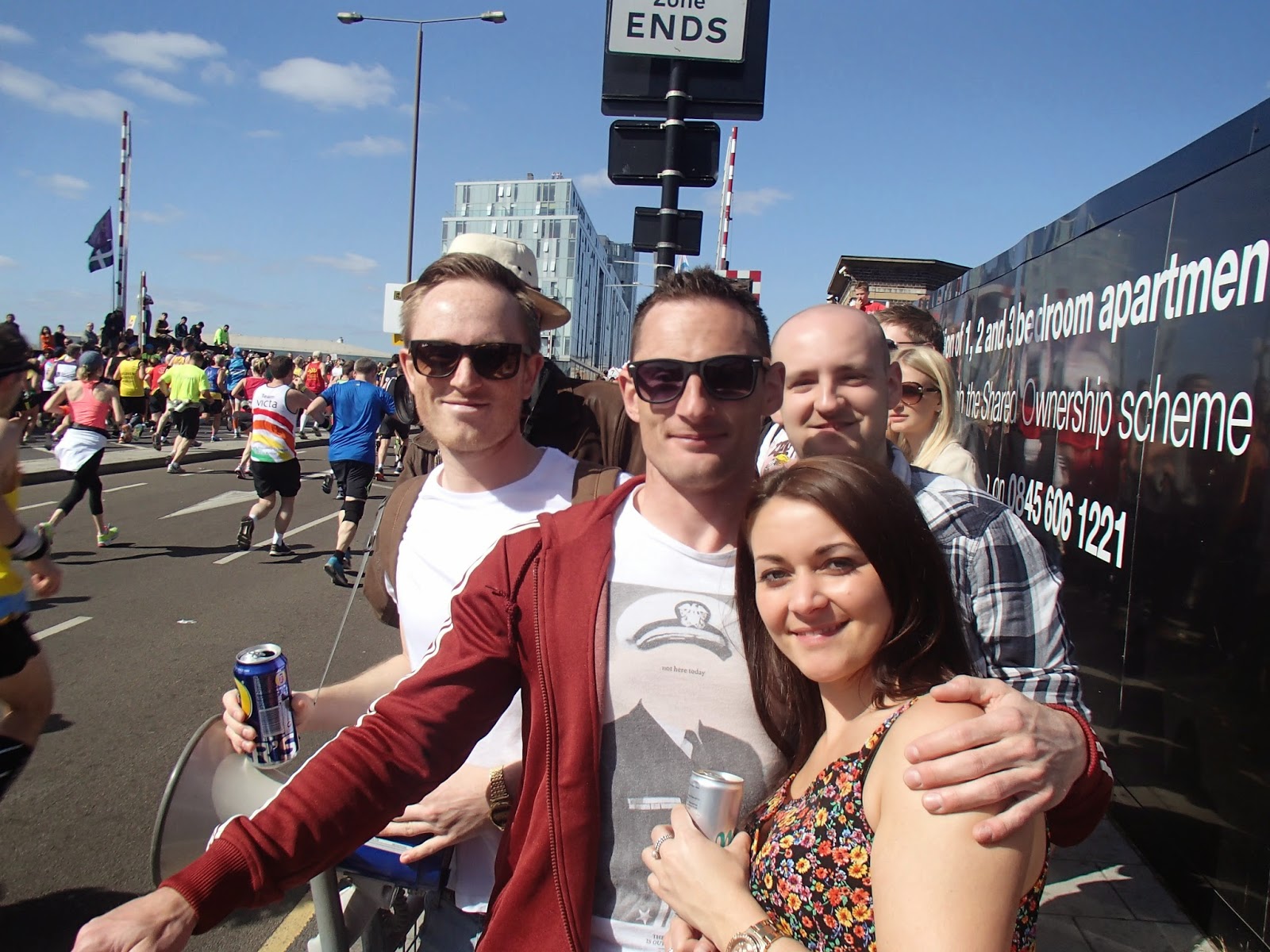 Standing there watching you see such  an eclectic bunch of people. Some look as fit as a butchers dog while others you cannot imagine why they ever undertook this event. However you must give those especially all the credit as they are going for it and some are going through incredible pain all in the made of charity.

I was inspired again and now feel I need to take on this marathon again for charity. Lat time I ran from John Grooms, this time who knows. There are many close to my heart.

Congratulations to all who undertook this event and I hope your feet and legs are not as sore as mine where all those years ago!


Posted by Unknown at 14:39
Email ThisBlogThis!Share to TwitterShare to FacebookShare to Pinterest