The random choices we make 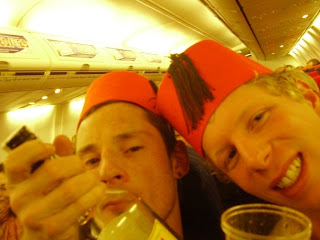 The random choices we make

Many beers had been consumed that evening so when I went round JP’s house to look for last minute flights I still had a feeling that nothing would materialize from the day.

How wrong could I have been? After searching the internet we found a flight, into one of the last vestiges of the British Empire, Gibraltar. We decided to try and get to Morocco too, just for good measure of course.
Gibraltar was surprisingly hot for this time of year and after we had walked into Spain and back again just for the sake of it was time to explore the Rock.

Clambering over some railing at the top of the gun look out military point wasn’t really allowed, but JP and I did it anyway. Soon some random guy followed and we explored keeping a safe distance away from this note pad-wielding loon.

Soon we were sitting on the guns, fiddling with all the old rusting instruments and on the roof of the rotating gun point. The little note pad man was attempting to open the gun barrel and after a few grunts and groans he gave up. So over I skip and with a big yank the barrel chamber comes open and the note pad man turns his nose up and departs, probably to torment the monkeys.

The monkeys, Europe’s only ones are little buggers. We sat near the entrance to the caves that didn’t really turn us on and one tried to go in my bag, I told JP to shoo it off for me but he just took a photo in which I came out looking rather camp which I was not best pleased about. They sit along the roadside playing with themselves and squabbling, but no matter how hard I crossed my fingers and wished no Japanese tourists were bitten!
Castles, forts, underground siege tunnels and a cable car later we were in a bar. The usual place to find either myself or one of my friends will be with a pint in their hands. Talking utter tosh to who ever would listen. Gibraltar’s bars though are something different altogether.
Gibraltar is stuck in the 1950’s where sailors would come ashore after long voyages and run rampage in the bars and on the local women, although the bar looked like it had been run ragged and pillaged with sawdust on the floor and a vomiting man in the corner there were no women to pester so we drank our empire drinks to ourselves.

We had to bus back into Spain and then catch a speedy ferry to get to Morocco. En route we picked up a Pakistani American who spoke fluent Spanish and after sharing a hostel room with us for one night ran away because we drank too much and tormented people in the kasbah.

This is where our obsession for Bonnie Tyler’s ‘total Eclipse of the heart’ came to head. I started singing it in the winding alleyways of Tangiers old quarter soon we would sing it everywhere we went. I even had a video of me jumping out of a cable car on a very worn bungy cord in Latvia singing the song.

Tangiers treated us well, we watched as people hid under lorries hoping to get to Europe in the port, tried to teach a tea total barman rugby/army drinking games and also even managed to convinced a lovely craggily old carpet seller man to let us onto his roof to view the city from the hotchpotch uneven skyline. Although he didn’t like us taking photos as lots of female under garments were hanging up for an air.

Tea galore and magic lantern looking teapots became our obsession while our little jaunt continued, but the ferry beckoned and we had to get back to Spain to head up to Jerez to catch a flight home.

The taxi driver missed the airport turning on the motorway and decided to reverse up the outside lane with vehicles swerving to avoid a collision so he could go down the right exit; our hearts were in our mouths.
The airport was another little drinking session. Soon we had procured a bottle of cheap Spanish brandy and along with two tiny cokes had drank the lot and were now wearing our fez’s which we got in some market.

The stewardess on the ryanair flight wasn’t too happy with us as the cabin was dark for those sleeping passengers and we played drinking rock paper scissors with our readings lights on downing shots of the stuff.

When we were picked up by JP’s dad at Stansted we giggled a lot, said it was fun and nice out there and also still had our newly acquired headwear still on.

As we drove off JP turned to me and said ‘I will always wear sunglasses, as the sun never sets on the British Empire’, I couldn’t agree with him more.